An old, super-fast version of Championship Manager (via a free download).

A database updated to the present day by a sad messageboard user.

A series of short and clear single-player challenges to carry out in your own time every week ('save bottom-at-Christmas Hull from relegation', 'win the Bundesliga with a team who isn't Bayern' etc). No challenge should take longer than a couple of sittings (and many will be shorter than that).

A league table to separate the 1FF's wheat from the chaff in terms of managerial ability.

Martino Quackavelli said:
YES
Click to expand...
your loyalty will not go unrewarded

smat said:
Reported for hate speech.
Click to expand...
If I'm still allowed access after that distasteful remark I would also like to participate. Thanks smat.

Well, beggars can't be choosers, so okay then.

I will if my compooter can handle the game.

^^ You may have to change the language from Portuguese to English. Do this by selecting 'Definicoes de Jogo' > 'Lingua'. Sorry about that.

When the Challenge Save Files are made available, drag them into your Championship Manager 00-01 directory, and you will then be able to access them via the 'load game' feature.

A little about this version of CM. You will observe that it is very old. As such, certain aspects are a little quirky, including:
Should be playable though. Let me know if you have any problems.

A gentle one to start with. REAL MADRID.

It's January. Zinedine Zidane has been SACKED after a patch of indifferent form has left Real trailing Barcelona and Atletico Madrid by two points after 17 games. To compound Zidane's foolishness, he allowed both Sergio Ramos and Toni Kroos to leave the club earlier in the season (although, in mitigation, he did manage to ensnare Sergio Aguero, and things are going well in the Champions League).

Real's board have identified YOU as the man/woman/child to rescue their season. You have £43m available for transfers, should you wish to use it.

In this round, you will receive:
Download link for Challenge # 1 - Real Madrid HERE

You have one week.

For my part, I fucked it extremely up. Had an 8 point lead in the league and ended up 6 behind Barca, with 79 points.

Also lost 3-2 to PSG on aggregate in the semis of the CL.

I did salvage some points by winning the cup and beating Barcelona in two competitions.

This leaves me with... FIFTEEN POINTS.

Do we have to have CM installed already?

When I've downloaded it which program do I open the file with?

Craig said:
When I've downloaded it which program do I open the file with?
Click to expand...
You might be able to right-click and 'extract all' as it is. If not, Winrar or Winzip.

What a fucking ball ache. Well the league campaign was a disaster and I never really looked like challenging Barca for the title. As if finishing 22 points off the pace wasn't enough I was also absolutely arseholed at the Nou Camp.. I did have other chances to win a Clasico though after drawing them in the cup semi-final. These chances proved fruitless too but at least not as embarrassing as our first encounter. 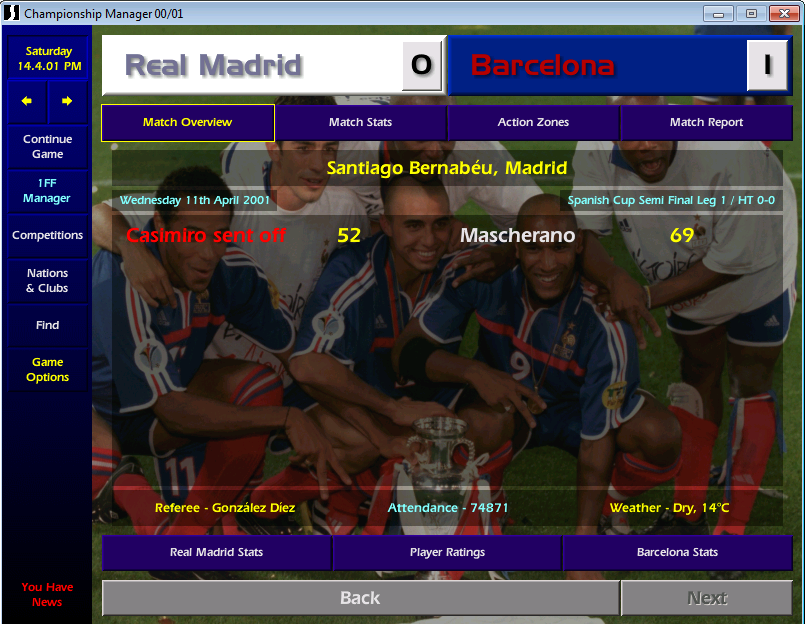 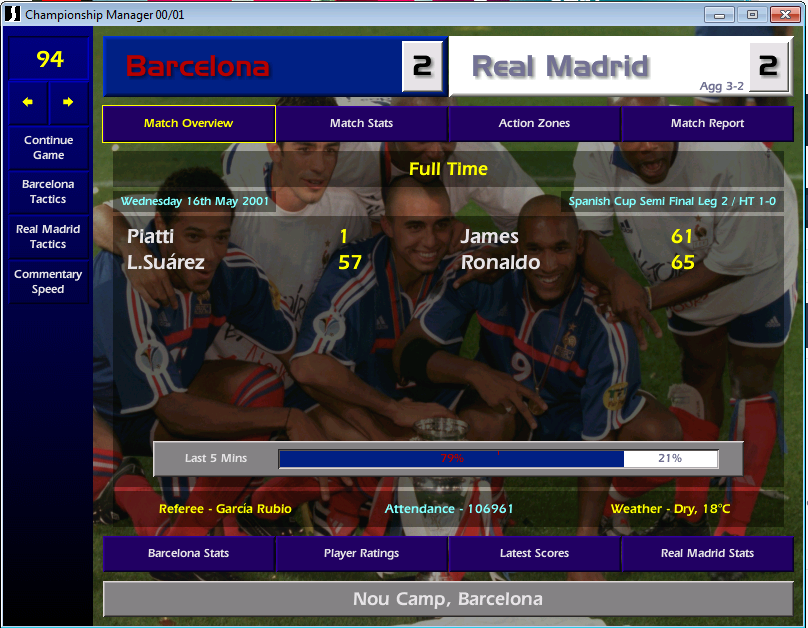 They naturally went on to win the cup.

Salvation presented itself in the form of Champions League glory though. I drew Arsenal in the semis, and after losing 3-1 at the Emirates my boys made them pay at the Bernabeu in the second leg to book our place in the final! 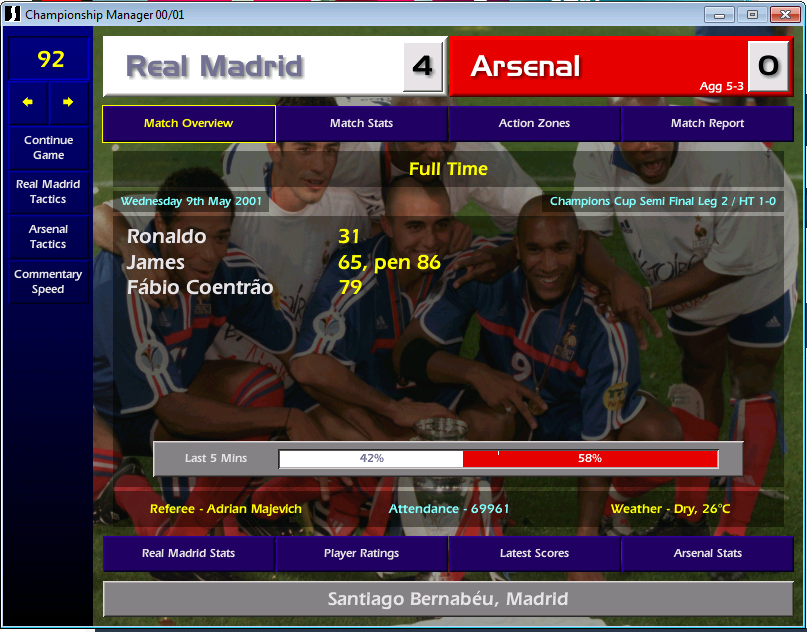 On a hot May evening in Naples we faced our old enemies from Catalonia and all that preceded was forgotten as beat the bastards on penalties after throwing away an early two goal lead. Not a great first challenge for me, but very happy to bring home the CL trophy.

Great stuff Craig. Laughed out loud at the 7-2.

I make that FIFTEEN POINTS for Creg.
M

#23
I propose a temporary cessation of this challenge in light of the recent terrorist incident.

Weren't much I could do in the league, unfortunately, Barca were just on fire... Even though I won the bloody Classico! The cups, however, were a different story... Breezed through the Champions League as we only lost one game to Juve in the group stage. Went through 1-0 on aggregate against Porto before a great game away to Juve which we came out on top of as 3-2 winners as revenge for our previous loss there, before a 2-0 win at the Bernabeu. Then came the final... No problem at all, as Ronaldo steps up.

The very next game is the Spanish Cup final which somehow Celta got to beating Barca over 2 legs in the semis (perhaps it would have been better for my score had they not!), however, we proved one step too far. I make that 20 points... Provisionally 25 for most league points?

Very impressive Jase, you would have won the league on mine as well.

Martino Quackavelli said:
I propose a temporary cessation of this challenge in light of the recent terrorist incident.
Click to expand...
I have given this full consideration and decided to release the following statement.

Terrorism, of course, runs counter to the values of the Championship Manager Challenge League. But we will not respond to this tragic event by making concessions on our way of life. The Championship Manager Challenge League will go ahead in defiance of this evil act, and once full details are released, the thread will be renamed in honour of the police officer who gave up his life in defence of our right to run this league.

We are British, and we will keep calm and carry on gaming. I didn't win the league. I was actually top with 4 games to go, but somehow managed to only pick up 1 point from those 4; including 1-0 home defeats against both Las Palmas and Granada. However, I did get a win (with some UNBELIEVABLE SCENES) at the Nou Camp. In the Champions League, I got knocked out by those Barca bastards in the semi-final. However, I did win the second leg. In the Spanish cup semi-final, I beat Barcelona in the first leg... ...And then beat them again in the second leg... And then I beat Celta in the final to pick up some silverware. How did Stuart Pearce get on tho?