This should be a Villa-esque game, with Leicester in bad form and CONFUSION REIGNING over Pearson's job.

Would quite like to see Chuba Akpom get a game, giving Giroud a rest. Hopefully Sanchez can return to compensate.

Fingers crossed Pearson doesn't strangle any of our players.

smat said:
Chance to BOUNCE BACK like so many Alans.

This should be a Villa-esque game, with Leicester in bad form and CONFUSION REIGNING over Pearson's job.

Would quite like to see Chuba Akpom get a game, giving Giroud a rest. Hopefully Sanchez can return to compensate.

Fingers crossed Pearson doesn't strangle any of our players.
Click to expand...

And Don't worry about Nigel Pearson, he can look after himself.

Could be the Kerrea Gilbert derby, or even the Ignasi Miquel derby.

smat said:
Could be the Kerrea Gilbert derby, or even the Ignasi Miquel derby.
Click to expand...

I imagine Kerrea Gilbert will be presented to the crowd pre-match. Round of applause from all sides of the ground.

And a huge Kerrea Gilbert tifo in the away end.

With Leicester having manager issues and us just being beaten, this should be a complete decimation.

BUT, we're Arsenal...nothing is ever as easy as it should be.

Seeing this line-up will make me especially excited...

Ospina
Bellerin - Mertesacker - Koscielny - Gibbs
Coquelin Ramsey
Walcott - Cazorla/Ozil - Sanchez
Giroud​
I'd play that team. Monreal is our first choice LB at the minute and he's done really well this season but I'd chuck Gibbs in the team for this, he's better going forward and he's the better player so give him a chance to get back into the team. Now that Sanchez, Walcott, Ozil and Cazorla are all fit and available, I don't want to see Cazorla or Ozil on the wings, it has to be one or the other behind Giroud, never both. It probably wont happen though, we'll probably see Sanchez, Cazorla and Ozil behind Giroud tonight, not that it should matter considering who we're up against, but it's still annoying as fuck.

Give Giroud and Koscielny a rest.

Think we could see Chambers in for Bellerin if Gibbs plays over Monreal.

We've got Middlesbrough this weekend in the FA Cup, if we're going to see players rested it'll probably be then rather than tonight.

I'd rather we not rest too many at the weekend. I want another trophy.

Hard to rest when Danny Rose has a stamp at your achilles. 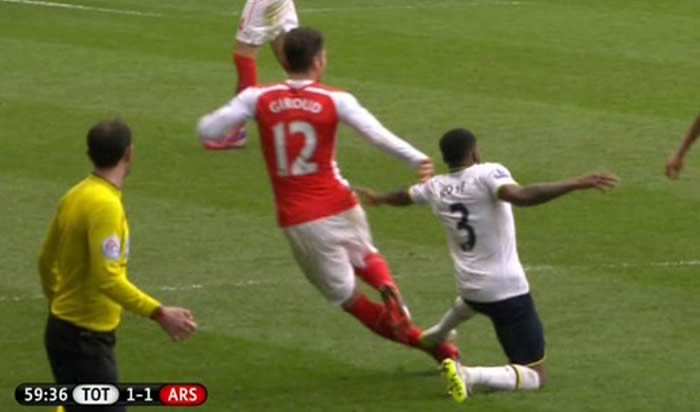 thespus said:
I'd rather we not rest too many at the weekend. I want another trophy.
Click to expand...

I wouldn't rest anybody for either fixture. We've had a couple of week-long breaks on the bounce now and we don't play again for another week after Middlesbrough.

I quite like the XI, actually. Rosicky, Cazorla, and Özil comprise a symphony of footballers. Alexis and Walcott wreak havoc, one on the ball and other off it.

Edit - 3 goals and 2 assists for Özil in his 4 games since returning from injury.

WTF Özil just shot from outside the box.

Walcott still looks unfit and he's actually been fairly rubbish since he returned (understandably) but he's got himself another goal and could have had another two this game. Happy to have him back.

Ozil has been outstanding, and he's playing through the middle. What formation are we playing?

We have been dreadful. Walcott's the worst player on the pitch.

Coquelin has also been very good again tonight. Thought he was our best player at Spurs, was incredible in the opening 40 minutes or so.

Özil looking superb. Theo still looks off the pace, but his productivity around the box is critical for us—really well taken goal.

Far from over. We've been really ropy at the back and Mahrez looks like he just dgaf.

This is insanity. Alexis Sanchez is injured. He shouldn't be on the pitch. We're playing with ten men of our own volition! INSANITY

Ramsey on for less than 10 minutes.

We were terrible in the second half. Escaped with that one.

That was absolutely horrendous.