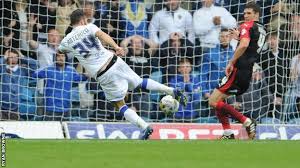 Leeds travel away to Brentford on Saturday hoping to keep their recent run of form going. Mean while a miss firing Brentford hope to chalk up some goals as well as points on the board after two heavy back to back defeats.
Its been a few seasons since both sides clashed. The last time both teams met in the league was back in 09/10 season in the lower division of League One. Both games ended in draws and a share of the spoils. However this time out the sides will be hoping to change this statistic.

Last weekend Brentford suffered a loss of 4-0 to the hands of a surging Boro team. But Mark Warburton has been quick to back his players to respond with a performance at Griffin Park against Leeds. Changes look set to be made to the starting XI that were humbled away from home. After being second best all game against Boro, Warburton will be looking for more steel and looking at his front line to step up and find the net after two defeats with not even a goal as a consolation prize to build on. Can Gray put an end to the mini drought?

Leeds Utd paint a different picture than Brentford's recent results. Leeds travel with 10 points gained from a possible 12 after 4 games unbeaten. Confidence is high and a lack of goals is not an issue. Plus Leeds may have another factor which could push this game in their favour even more. Darko Milanic is on the verge of becoming the new manger at Elland Road. He comes with an impressive CV and a style of football which Leeds have been showing in recent weeks. A win to start off his era at Leeds is surely a must. But he comes at a time where the Leeds side are in much better shape than under Hockaday. Caretaker manager Redfearn transformed a headless bunch into a fluent and United team.

Brentford have home advantage but the odds look stacked against them. A free flowing Leeds Utd are coming to town with players across the park who are scoring for fun. Plus with a new man potentially at the helm the meaning of the game just went up another notch. Brentford will be hoping to spoil the party but I think this time out Cellino's band of men will win out the day with the new revamped sexy football that has be born thanks to a touch of continental ingredients.
You must log in or register to reply here.
Share:
Facebook Twitter Reddit Pinterest Tumblr WhatsApp Email Share Link