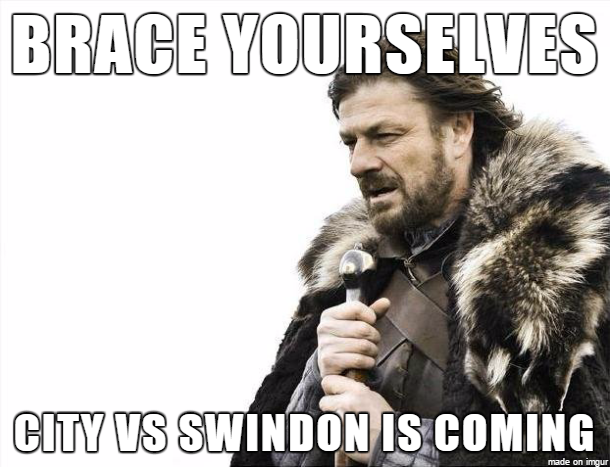 Finding it difficult to care about this one at the moment after today's game.

And it begins
P

Meh. A chance to try a new formation for the play off battle.

Nah seriously, it probably won't reach the heights (?) it could've done, now it's not as season-defining as it promised to be

Bloody Thompson, spoiling our fun and getting suspended!

Not the season defining game that we all thought it might be but im still gonna be nervous as hell! Although nothing can be mathematically guaranteed, lets face it - win and we are effectively up. We know it, they know it. Only a complete freak set of results, the likes of which football has never seen before could deny us.

Hopefully todays result has knocked the stuffing out of them and we can take full advantage. Then after their antics in november, we can show them a real party.

Bristol Rovers are a bigger club than Swindon.

8500 crowd for Rovers yesterday in the Conference. 10,000 crowd for Swindon today in a promotion clash at the top of L1.

BCFC Jordan said:
8300 crowd for Rovers yesterday in the Conference. 10,000 crowd for Swindon today in a promotion clash at the top of L1.
Click to expand...

Not even going to bother trying to reply to that. WUM.

Running over to an opponent's away support and celebrating like you've won the league in November is WUM'ing. Justice is served now, though. Also Thompson didn't fancy Tuesday and has bottled it like the rest of his team.

Play that team and go for it.

Jesus Christ, you're a weirdo. I'm going to bite, just for the fun of it.

Unfortunately for you, current gates are NOT the only criteria used when assessing a club's size, which is usually a totally pointless argument anyway. Thankfully, there are some sensible people on this forum who understand that.

The Thompson thing has been done to death. He was celebrating a big win against one of his club's rivals. He is a Swindon boy so naturally it meant that little bit more to him. No different to a player celebrating when scoring a goal against his former club and an entirely natural reaction. That you it still eats away at you speaks volumes and is mildly hilarious.

As for his yellow card today and subsequent ban, there is literally nothing he could have done about it. He would've relished Tuesday's game, not got booked on purpose to get out of playing in it.
Last edited: Apr 4, 2015

Rovers bigger than Swindon? Now that is being silly at least try and be clever with banter.

It's genuinely my opinion, whatever. Clearly a bit touchy if you're calling someone a 'weirdo'. Stop trying to defend Thompson as if it was a normal reaction, too.
L

Would be nice to try and keep this thread about the game. And no way are the horse punchers bigger than Swindon.

Why not, though? It's not as if Swindon are historically bigger than Rovers. Rovers have spent more time in the top two divisions than them.

I can see that many dicks will be waved in this thread, and perhaps not even waved about the game.

Should be a good match regardless. You'd say Bristol, though wouldn't surprise me if Swindon delayed their promotion a while - Been the best side I've seen town play by far.

I expected a bit of Banter, and baiting... But to call our biggest rivals bigger to achieve it? Not having that. Rovers can fuck off and rot in the conference for the rest of their days as far as I'm concerened, and like Mike said.. Current attendences isn't the only criteria when it comes to "big clubs"

Anyway, onto the game. Pretty confident we will win this game now, with swindons confidence taking and inevitable knock and their captain now missing out... I'm still gonna be nervous as fuck though!

According to european-football-statistics.co.uk, who go back 87 years for both Swindon and Rovers, during that time Rovers have spent 1 more year in the top 2 divisions, but obviously one of those years for Swindon was in the top flight, which the Gas have never played in. Swindon have also never been non-league, and the crowd sizes between them are generally very similar. However, when Rovers were last in League 1 they averaged less than Swindon have managed in their last 2 (soon to be 3) league one seasons. Personally think Swindon are bigger

4 promotions in 132 years, an average gate never exceeding 10,000 since 1976 tells you all you need to know that the gas are smaller than Swindon, the club has done absolutely nothing of note despite being the oldest club in the region.

On to Tuesday, time to put Swindons auto chances well and truly to bed, bring on the jet.

Well, it's the longly anticipated and dreaded match thread that has been discussed since the events of November at the Country Ground. Probably best the game turnaround is 3 days rather than a week to be honest!

As for the game - City come into it 10 unbeaten with the best home record in the league, and Swindon come into this having just been beaten 0-3 on their own patch by promotion rivals.

I said before the MK game, it's win or bust for Swindon, but if there is still any glimmer of hope of catching us and Preston, this HAS to be a win.

Should be a good game, a cracking atmosphere, just a shame that twat Thompson ain't playing ay.

Gonna need my mod hat for this i reckon

TomPNE94 said:
Gonna need my mod hat for this i reckon
Click to expand...

You can take mine, I can't even merge a thread on iPad properly, let alone fucking moderate a threat full of these lot

Going to be a bloodbath if you let your heads go down again like you did after Powell's goal.

Bacchus said:
Going to be a bloodbath if you let your heads go down again like you did after Powell's goal.
Click to expand...

I think it's more the fact they were pushing numbers forward and got caught on the break, e.g. the second goal, where Swindon's Left Back was caught miles up the pitch, and Grigg had the freedom of the box to pick his spot.

The good thing is today's result has taken a lot of pressure off us.

Bacchus said:
Going to be a bloodbath if you let your heads go down again like you did after Powell's goal.
Click to expand...