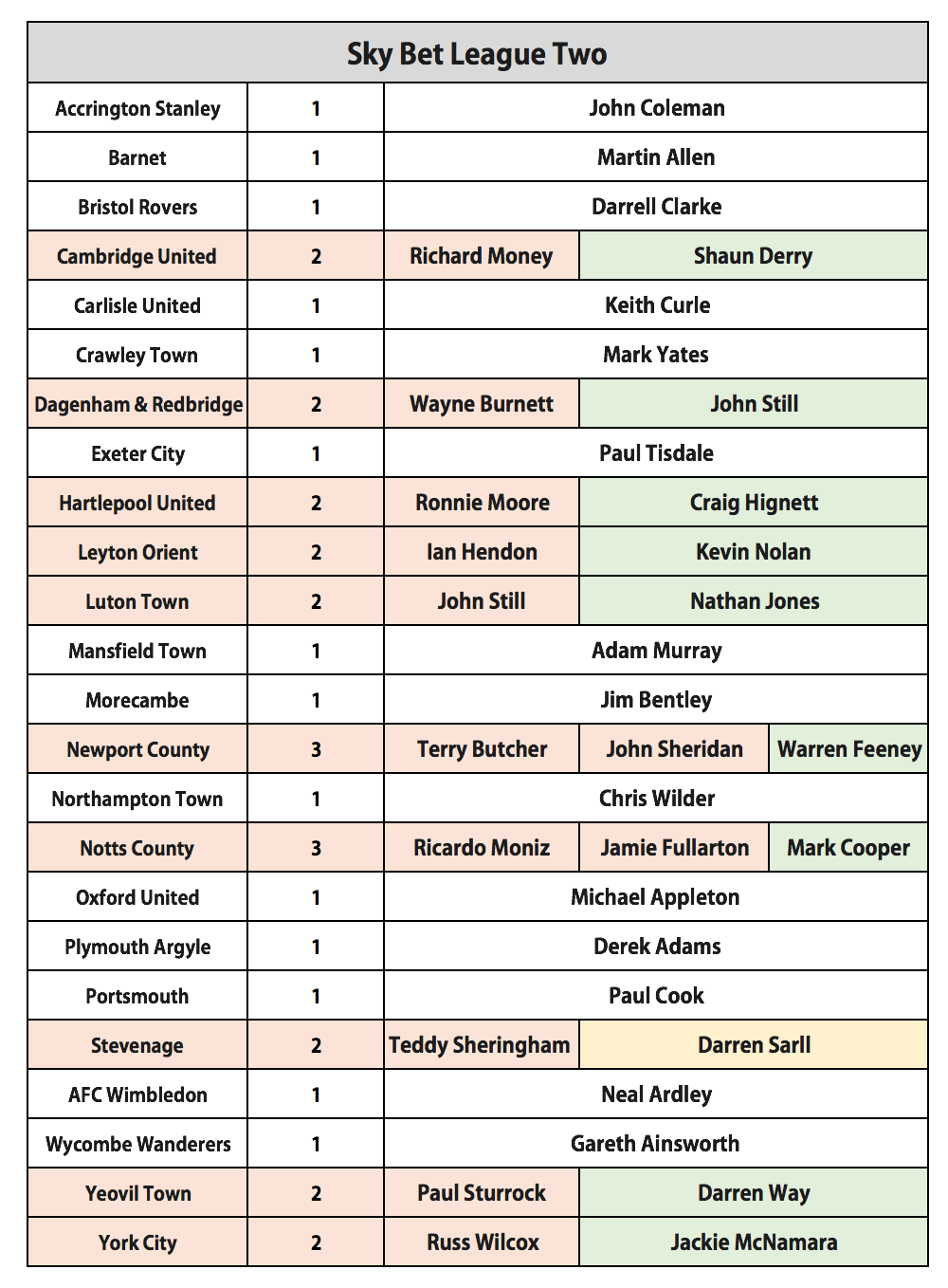 Martin Allen should be the next to go. Awful manager

it is very surprising to me that we've had only one change by October.

Is this a lot less than usual or am I just assuming we have loads by this time of season.

BigDaveCUFC said:
it is very surprising to me that we've had only one change by October.

Is this a lot less than usual or am I just assuming we have loads by this time of season.
Click to expand...

No, it is less than usual. These things tend to go in cycles though - this time next year four or five who a re new/relatively new now will have gone, then the year after there will be fewer again.

Russell Wilcox is not endearing himself to the faithful at York, I could see him going if we don't pick up some results in the next few games.

Gareth Ainsworth won't be sacked as he signed a 5 year contract extension recently.

are you sure it wasn't a contract for 5 hair extensions??

BeeSting said:
Martin Allen should be the next to go. Awful manager
Click to expand...

Was it not just a few months ago that he got you promoted back into the football league?

oakroader said:
are you sure it wasn't a contract for 5 hair extensions??
Click to expand...

He's had his hair cut short for this season,still looks a scruffy fucker mind!

Can see this changing over next few days.

surely the York and Yeovil bosses must be good bets to be sacked when Monday comes......and wonder if that late defeat may cost Still his job.

More luton fans have lost some of the faith,
they're starting to realise we're losing touch in the playoff raith (ahem!!)
still did what he did but now it's time
to realise,
something is not right,regardless of how hard he tries.
lets get a new face in to change things around,
before the kennel hears that familiar sound....
sacked in the morning,your getting sacked in the morning...
we a need a new manager to restart a new dawning.

Don't quite understand why though, the jury is still very very much out on him - Although he has built a decent team spirit amongst the players we have now.

Yesterday we were 1 win 8 with 5 of those being draws.

The Terminator said:
Although he has built a decent team spirit amongst the players we have now.
Click to expand...

Look Out There Are Llamas said:
Especially Cox.
Click to expand...

Unless Wilder leaves for another club he will be here for the duration. He's awesome.

Forgot to set York as vacant... 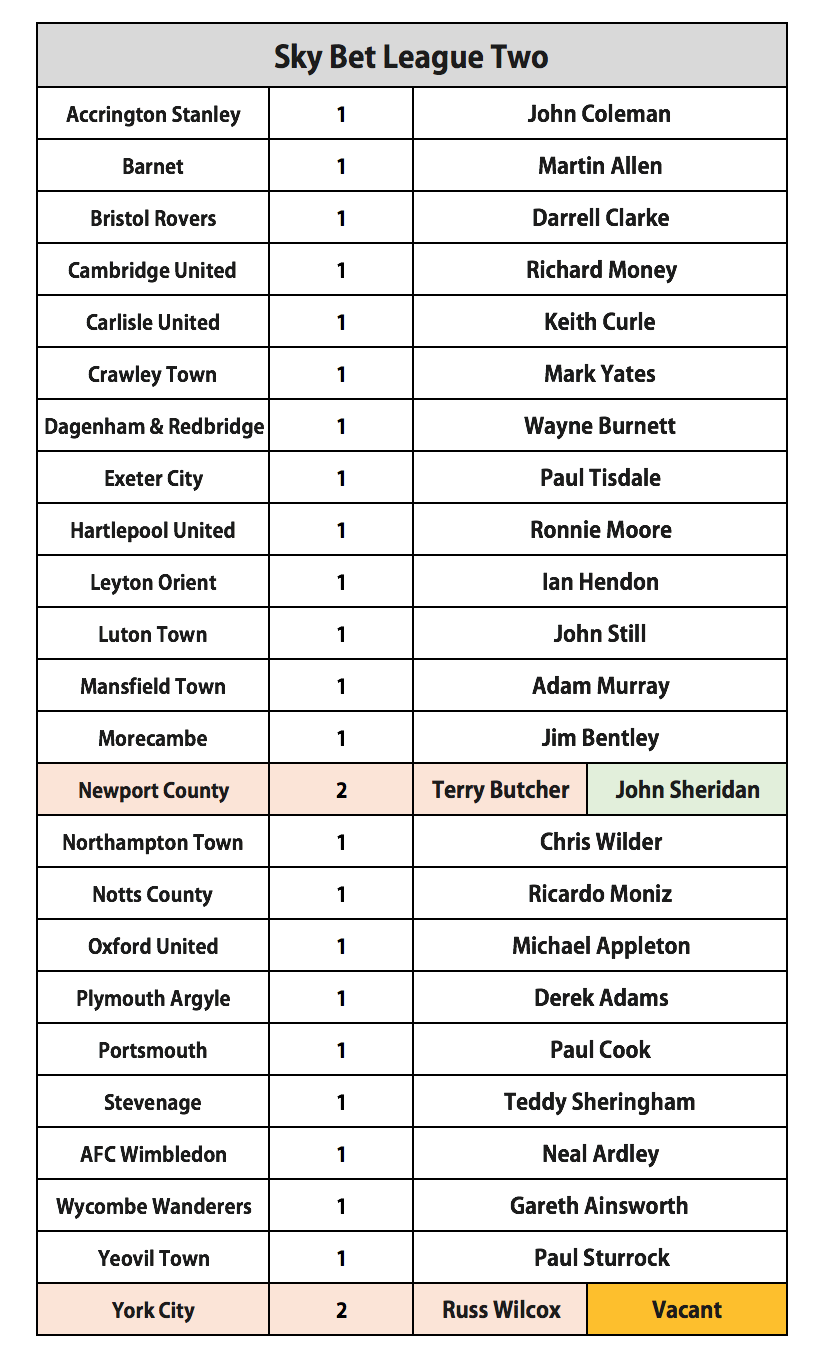 not if he didn't play in the beloved premiership.

Don't be suprised if Ian Hendon is gone by the end of the year. We've now had 16 games to judge him, which is enough time and yesterday was the first time the fans all turned on him, even though we created a few chances and certain players were guilty of missing them, we were still awful.

We're now 2 wins in 10 and it has to be said we've been really poor for 2 months now. Hendons style of play is becoming very predictable.

I wasn't happy with his appointment, but as always you give a manager time, he has even brought in his own backroom staff but his signings as well haven't been good enough.

Ollie Palmer has gone as I expected, a hard worker who has changed a few games for us and helped us earn draws, but his composure is awful in front of goal.

Frazer Shaw - A young raw left back who blows hot and cold.

Blair Turgott - See above, but hasn't had a run in the team.

Jack Payne, Sean Clohessy and Sammy Moore have been ok.

Also our defending structure as a team is awful, we cannot keep clean sheets for shit and always look likely to concede.

He'll never ever be a manager, his time at Barnet is being repeated, we'll be lucky not to be relegated again.

If you get relegated again I'll give you a million pounds.

It does look like Hendon's time as our manager is being repeated in E10 but there's far too much quality in the Orient squad for them to think about relegation.

rudebwoyben said:
It does look like Hendon's time as our manager is being repeated in E10 but there's far too much quality in the Orient squad for them to think about relegation.
Click to expand...

Thats what everyone said last season! Football is a funny game!

THE LAST WALTZ said:
Was it not just a few months ago that he got you promoted back into the football league?
Click to expand...

Well, the past fortnight has shown that Allen is a decent manager. He's realised that he needed to change our squad and the way we play, he discussed this with our chairman, he got Tony's backing to make these changes, he made the changes and we've picked up
10 points in our last four matches.

The Terminator said:
Thats what everyone said last season! Football is a funny game!
Click to expand...

There is no way you'll finish below Daggers and Yeovil look like they'll be in a lot of trouble this season.
H

jacobncfc said:
If you get relegated again I'll give you a million pounds.
Click to expand...

Very loosely worded there! I hope you have £1m spare!

No way! Daggers, Yeovil and York look very poor this year, though Yeovil have one very important thing in their favour and that is they simply don't know when they're beaten and never give up. Then there's also Newport whose recent revival under Sheridan could be short-lived, esp. if they get hit by injuries, due to the small squad they have, though I personally think that somehow or other he'll keep them up.

Orient to finish below these 4 sides? Absolutely no way.
H

Not forgetting a highly likely NTFC Meltdown if this takeover does not go through. Doomsday for us could be saviour for someone else.

I don't think there's much chance of Sturrock going, he was pretty cheap from what I've heard and our board won't want to pay more for someone else (Ricardo Moniz applied but I think he was too expensive). Luggy hasn't exactly got much to work with and that amount of injures is freakish and probably would have happened regardless of who was in charge.