Following on from the little debate in the 'Transfer Rumours' thread. I was wondering what peoples experiences are of your club signing up characters from distant lands, with exotic sounding names; whilst plying your trade in the basement division.

Legions of Johnny Foreigners traipse these shores for trials at this time of year, but have any of them ever been any good; or gone on to gain properly earned fond memories, or even legendary status?
Or is it true that the vast majority are cunning sub-fair mercenaries that head back from whenst they came as quickly as they arrived on your desperate clubs door mat?

Kingsley Mbome, Igor Latte-Yedo, Abdou El Kholti, Sulley Seychelles, George Louis-Mongin, all part of our 04/05 relegation squad, although the latter two never actually played for us (Mongin got a pre-season injury and I can't remember why Seychelles buggered off). The former two were comically abysmal and pretty much summed up our season between them.

We don't really ever have many and no offence I don't remember other clubs players really.

Firstly Sulley Seychelles could possibly be one of my favourite names ever.

From my memory as dodgy as its getting Cyril L'Helgouac'h (France) turned up scored a belter and quickly evaporated.

Maxine Chanot (Luxembourg) turned up got sent off and evaporated.

Players like Dave Artell, Junior Mendes, Warren Hackett etc where quality but their ethnicity was decided by aunties, great uncles dogs dads sailing past the aforementioned country on a Tuesday in february.

We'd have an assortment over the years, most of them not exactly making the greatest of impressions. Whilst in League Two I can recall Kenny Gillet who was a good attacking left back, but apart from him, I'm struggling to think of anyone else that did well.

Our best has to be Luisma whilst in any division. Gutted that he's gone back to Spain as he was the the kind of player you'd pay to watch. Would usually do something in a game that you knew no one else could, whether it was a little flick that took two players out of the game, a drop of the shoulder than sent a defender out of the ground, or a blinding free-kick to win a match.

Tom_CUFC said:
Kingsley Mbome, Igor Latte-Yedo, Abdou El Kholti, Sulley Seychelles, George Louis-Mongin, all part of our 04/05 relegation squad, although the latter two never actually played for us (Mongin got a pre-season injury and I can't remember why Seychelles buggered off). The former two were comically abysmal and pretty much summed up our season between them.
Click to expand...

Considering he only had 5 starts in that disastrous L2 season (12 appearances), Igor certainly sticks in the memory - a comedy distraction probably unmatched over the last decade. At 6ft 4", Herve was convinced there was a footballer in there and regularly threw him up front - to the relief of Andy Duncan and confused puzzlement of all around him. I still seem to remember some of his mazy runs and shots over the NRE but the only memories of his defending were poor old Duncs trying to steer him into position minute by minute. 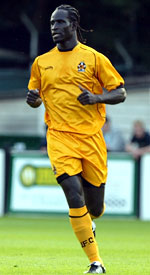 Romain Vincelot for us.
T

Sergio Torres (Argie) was a fan favourite for us, he's dropped into non-league now but I think that's more through his injury record than a lack of talent.

Carlos Lopez (Mex) has passed into legend as one of the worst players ever to turn out for Wycombe, let alone worst foreign player, although to be fair he only turned out once for us. Claimed to have been on the books of Athletic Bilbao - except they'd never heard of him. It was also rumoured he'd only been signed for comedy value as he was a dead ringer for then manager, Lawrie Sanchez.

Ended up as a football pundit on Mexican TV, and randomly sent the club a couple of years back to say how much he'd enjoyed his time at Wycombe - odd but quite funny....

BigDaveCUFC said:
We don't really ever have many and no offence I don't remember other clubs players really.

but for Carlisle I think my fave was big Stephane Pounewatchy who played in our defence in 1996/7 when we won promotion out of div (well L2)
Click to expand...

Zoko wasn't too bad either! Until he betrayed us that is - I'd still have him back though.

Kangawa Lord N'Diwa. A five minute loan spell that sends shudders down the spine. Ironically, as we were 3-0 up at the time and despite being allegedly a defender he was told to go up front and stay there, no damage was done resultswise!

He was an Italian left back who looked decent in a couple of friendlies, but only played twice for us cause he was crap.

Bugno is one of an armada of players, foreign and domestic who had such scant impact that it almost feels unfair to judge them for it. Marco Pierre-Gbarssin anyone? Nacho Novo perhaps, or how about Jeremy Helan... Rafael Nade while you're at it, or Raphael Spiegel or Georg Iliev from last season or the plethora of Irish players Roddy Collins brought in, they all count as foreign.

Bugno kind of wins a prize though for the fact that he was signed from an Italian club as a complete unknown (even in Italy), started twice or something and then returned to the exact same Italian club in January to continue his career as a Serie C journeyman.

Bugno kind of sums up everything that was wrong with Greg Abbot's transfer policy. He never seemed to chase targets, he would just sit on his fat arse and entertain the dodgy agents who would spam his inbox. Of course sometimes, as with Francois Zoko this worked well, but most of the time our summer signings were about as random as they come. The remainder consisting of players who came to us because of Kav's famous Premier League contacts (for 'contacts' read 'Stuart Ripley').
Last edited: Jul 3, 2015

Kangawa Lord N'Diwa. A five minute loan spell that sends shudders down the spine. Ironically, as we were 3-0 up at the time and despite being allegedly a defender he was told to go up front and stay there, no damage was done resultswise!
Click to expand...

He must have been spectacularly awful otherwise it would seem unfair to judge him on his performance up front if he was a defender.

He wins, solely for this goal:

Jean Louis Valois was absolutely amazing for us.

Watching him was just absolutely brilliant, just used to stroll around the pitch looking cool as fuck, get the ball saunter around a few players and pick out a brilliant pass/cross/slam it in the top corner from 25 yards like it was no big deal. I was still pretty young when he was here so he was my absolute hero, along with Matt Taylor. He made everything look so easy and smooth.

I'm trying to think of some league 2 bad ones but struggling a bit, most of the ones I'm thinking of where of the league 1 variety.

Sunday Waisu (Nigerian) wasn't up to much in the -30 season of i remember.

Our best by a mile was vitalijs Astafjevs. Brilliant name , brilliant footballer and a bit of a arrogant sod . All you could want from a foreign type in the lower leagues . Went on to play for Latvia 167 times captaining them at Euro 2004 . I loved that man dearly

Edgar Davids when he first arrived completely transformed the team. Worst is Collins John who barely made it on the pitch before coming off injured.

Gutted Luisma wont be seen in League 2. Very special player who would be playing much higher if he had a bit of pace.

That Fat Centre Half said:
Jean Louis Valois was absolutely amazing for us.

Watching him was just absolutely brilliant, just used to stroll around the pitch looking cool as fuck, get the ball saunter around a few players and pick out a brilliant pass/cross/slam it in the top corner from 25 yards like it was no big deal.
Click to expand...

We were exceptional that year. Valois, quite possibly the most technically gifted player ever to play at this level:

He was brilliant to watch, serious man crush material.

He was only the second best left winger in our squad that year though. Matty Taylor far more consistent and both scored and assisted more than Valois that season despite spending half his time at left back to accommodate JLV.

He didn't quite have the same panache as Jean Louis though...

Vincelot has to be up there.

Totally out of the blue signing from Chamois Nortais (Could be wrong) for us under Still in the January 09/10 season, originally at RB before being converted out of necessity into central-midfield. Brought over in the back of a white van (legit, I promise) after one of Still's mates in France had seen him playing in a 5 aside tournament. Absolutely bossed the midfield alongside Peter Gain in the 2nd half of that season, scoring a few vital goals and doing the dirty on the way to promotion. Even better in League One for us.

I used to love Sagi Burton!! He was a terrible player for us don't get me wrong, but our supporters used to call him Sagi 'Riverside' Burton as every time he got the ball it used to end up in the river behind the stand at the old Gay Meadow.
I can remember one Tuesday evening match, he picked up the ball in acres of space and as he went to kick the ball our own fans shouted "HOOF" which resorted in Sagi sliding across the floor and slicing the ball which as you can expect, ended up in the bloody river

Sergio Torres for us, the Argentinian midfielder was signed from Basingstoke after we slaughtered them in a pre season friendly.

We've had more good ones than bad ones I think. I can remember the likes of Allsopp, Jacobssen, Cas growing up, who were probably 3 of my favourite players.

I can't really remember any embarrassing examples, a few were very average like N'Toya, or solid like Baudet and we've had the occasional cameo like Demba-Nyren and Sissoko but neither looked abysmal. David Joseph, Fabrice Moreau...

Love Yoann Arquin too, haters gonna hate, he was glorious.