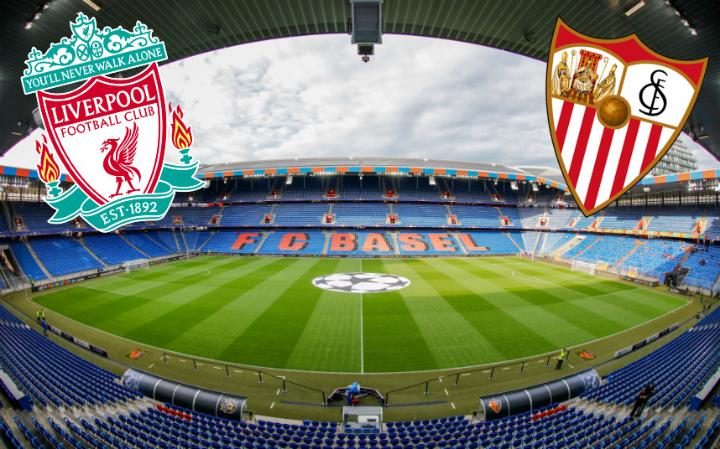 Only 11 days left before the final. Liverpool have 3 PL games before the final while Sevilla have 2 La Liga games (but they have Copa del rey final 3 days after EL final).

For Liverpool, according to Klopp, Hederson and Origi could feature in the final if they can be ready and get minutes during WBA match. On the other hand, Sevilla's LB Tremoulinas will miss the final due to knee injury he picked up against Shaktar Donetsk.

Both teams League form has been poor this season. Us blowing hot and cold. Sevilla yet to win a single away game this season! However, they are in two cup finals. Kevin Gameiro has been scoring for fun this season. Should be an even game.

Applied for tickets for that game. I didn't get any.

With only about 18k tickets for the fans, you have to be extremely lucky.

It's usually rather easy for an EL final. I think my downfall is that I asked for a ticket and not two. I didn't think at the time that I'd find someone to go with. That and the fact that staying in Switzerland for 5 days is quite expensive and that I knew I was going to spend an awful lot of money during Euro 2016.

Apparently Sevilla failed to sell about 2k tickets for the final. Of those unsold 1600 will be sold to Liverpool fans, while the rest will be left empty. Why not just sell the rest too smh.

Was Big Salt right all along? 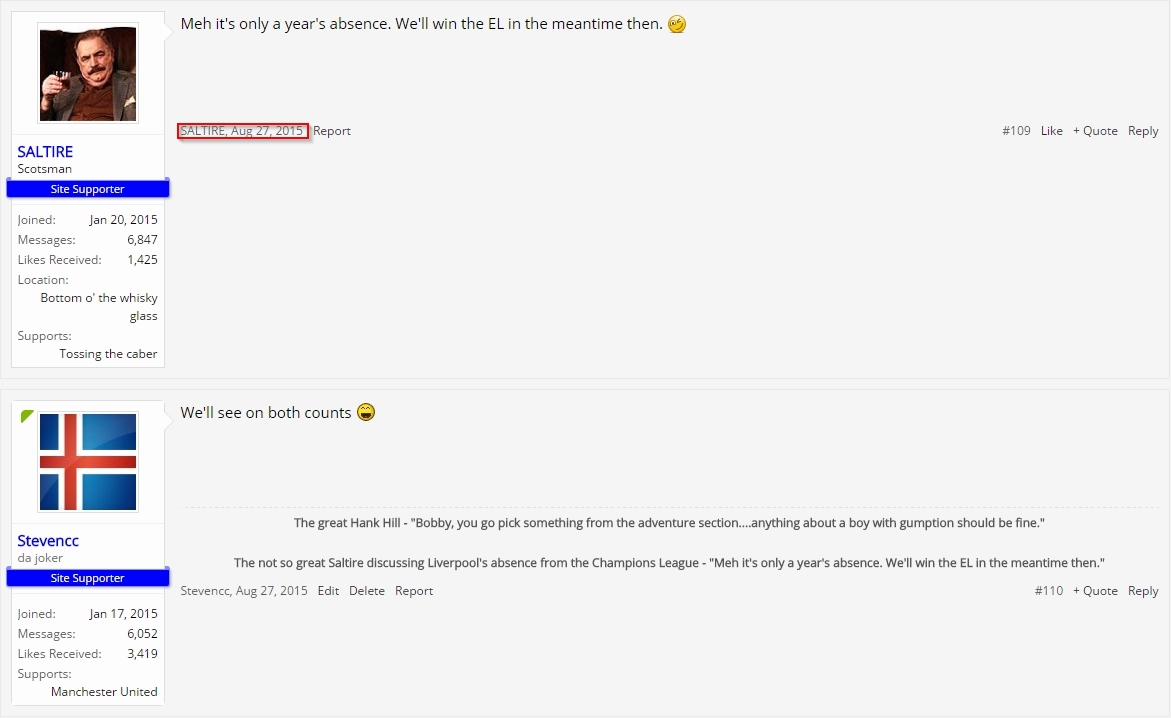 Stevencc said:
Was Big Salt right all along?

Haha we'll probably fail at the last as usual with this side but it's good to be in with a shot of a trophy again. Klopp has reached two finals in 7 months, Brendan didn't get to one in three years, it's been too long.

No but he came 2nd in the fucking league man it wasn't all shit from Brenda.

JimJams said:
No but he came 2nd in the fucking league man it wasn't all shit from Brenda.
Click to expand...

Oh absolutely and I wasn't one that was demanding Rodgers get punted after the Stoke humiliation; my point is that in the cups we haven't really been competing for them for a while since we last won against Cardiff under Dalglish and got to the FA Cup Final. I'm sick to death of seeing them get near and into semi's like last season, or eventually get into finals, and lose them! I'm hoping that this one can see them finally win something major again, and it would kick on the development quicker if that also means CL football.

Stevencc said:
Was Big Salt right all along?

Oh, I thought he meant Premier League by EL.

Fuck it, we'll win this, I'm confident. Seville have a great record in this competition in the last two years but their record on the road this season is fucking dire with 27 fixtures and only 1 win, and that includes one neutral venue where they lost. On Wednesday we'll make it 1 win in 28.

Liverpool have a whole team of destiny thing going on, I can't see them losing this. Their league position and form isn't representative of their quality, they have shown they have the ability to blown away top team teams in games this season (United, City, Villarreal, Dortmund for a half) and Sevilla despite their prowess in this tournament are not that impressive, I fully expect Liverpool to dominate the match like they've dominated most matches under Klopp. He has been able to rest his players wisely for over a month and at full strength, they are a fearsome side. If they are clinical on the night, they'll take it.

Hopefully a defensive blunder costs them, it's a shame Sahko isn't around to provide it. Dejan, Kolo, Simon, it's up to you. Do it for Europe.

Newcastle are going to be a top team next season in my very honest opinion and that.

don't tell me how to live my life steven. we're gonna fall out me and u.

also, you've no right to laugh given my well documented loyalties to city and our epic triumph over the evil of your club. i've also got 2 finals to look forward to and my (and my good mate salty's) clubs have won a total of 36 trophies this season thus far. it's been a good haul this year, despite the injustice of relegation for one of my chosen teams.

I take it back.

That's a clean burning hell, I tell you what. Enjoy it G.B.

Pagnell said:
Fuck it, we'll win this, I'm confident. Seville have a great record in this competition in the last two years but their record on the road this season is fucking dire with 27 fixtures and only 1 win, and that includes one neutral venue where they lost. On Wednesday we'll make it 1 win in 28.

I agree with most of this. I'm always a wreck before a final but I can't recall being as confident as I am for this one. Cardiff in 2011 maybe. If we don't win it'll be a huge disappointment, not least because of Klopp's eggs in one basket-rotation leading up to this final essentially guaranteeing us a rather embarrassing league finish.

We have to win and I reckon we will.

G-Dragon said:
Apparently Sevilla failed to sell about 2k tickets for the final. Of those unsold 1600 will be sold to Liverpool fans, while the rest will be left empty. Why not just sell the rest too smh.
Click to expand...

Only about 250 got released to those on the waiting list from the ballot in the end, not sure what happened there... I'd been hoping.

With everyone but Gomez & Sakho available (Ings got taken out of the EL squad in January) as Origi's been passed fit, we've a strong lineup and a strong bench as well.

There's no reason we can't beat Sevilla, we've beaten & blow away a number of better teams this season, but Sevilla love this competition and are an excellent cup side, hence their two finals this week. Sturridge winner, 2-1.

Renegade said:
That's a clean burning hell, I tell you what. Enjoy it G.B.

Just got a weird feeling we're gonna bottle it and lose 1-0.

I think Klopp would be silly to start Origi after the form Sturridge had been in and after being out for a while.

I hope he doesn't throw Henderson in the starting XI. He should only be used if we need to protect a lead.

I will be gutted if we lose this after the teams we have beaten. Honestly feel like we will choke this somehow

Yeah I'm getting that feeling as well; perhaps its just nerves. Klopp has lost his last four finals and this team haven't won a trophy together really (only a handful are still there from the League Cup win in 2012) and have a recent history of failing at the last. On the plus side, Sevilla's away form is pretty dreadful, and this is a bit reminiscent of 2005 for Liverpool, when they lost the League Cup final, were shit in the league, yet somehow won a European Cup - lets hope history repeats!

If they play like they have in Europe over the last few games, I think they'll do it; if they don't start that well or let Sevilla in early on; then its game over even with their recent bouncebackability they've shown.

SALTIRE said:
a bit reminiscent of 2005 for Liverpool
Click to expand...

Still confident. But not half as much as I was at the beginning of the week. I'll be a wreck by 7pm definitely.

Still confident. But not half as much as I was at the beginning of the week. I'll be a wreck by 7pm definitely.
Click to expand...

just imagine what you would be like if you had some sort of affinity with the city.....LOL

I think Liverpool could win this easily 3 - 0

Seville are awful atm and finished mid-table then again not as low as Liverpool...........mediocre teams in a poor comp could go anyway.

My cousin has gone to this and he said there is an atmosphere of it's Liverpools to lose..........i hope he's right.

And I'm still confident. Which is worrying in itself in a way.

We'll take this by a couple of goals. Come on lads, CL final awaits, show you have the bollocks for it.