I don't like Norwich, the last time they were in the league with Chris Hughton they bored the pants off me when I saw them at the Emirates. I went on a date with a semi-fit bird last week who's from Bournemouth, so I'll be hoping for them to win.

Need a win really but not going to happen, expect a comfortable win for everyone's favourite fairytale.

B'Mouth to destroy the canaries. 1-3.

Fair to say it's been an up and down start to the season, the extremes of frustration at Liverpool, joy at West Ham, and sadness at losing Mings and Gradel long term against Leicester. Never a dull day is there. Those injuries have hit us quite hard, compounded by Charlie Daniels being out for a shorter period as well, so we're going to be somewhat patched up down our left side as (I assume) the loanee Bennett will come in from Villa.

The club could do with some sort of result to lift the mood a bit, but the reality is we've made a reasonable start to life up here and have plenty of decent options to work with. Glenn Murray will probably come in at some stage, unsure if we'll be start him with Wilson in 4-4-2 or if at this stage Murray will be a replacement for now. Would love to see the pair of them together soon though.

The continued absence of Harry Arter through injury means ex Norwich Drew Surman will be expected to continue his good form in stepping up. I do worry a bit about central midfield without Arter, but it's been just about ok..so far.

I understand Norwich will be without Whittaker at full back, not sure who comes in for him.

I also understand there's loads of roadworks between the M25 and Norwich, likely to add significant time on the drive you think?

1-1 for me, Norwich seem pretty solid at the back and it will be a struggle to break them down.. Plus I never trust us to keep a clean sheet and can't see that changing tomorrow; too many individual errors at the back are costing us right now.

Gradel will be a huge miss; he was on fire against West ham and was tormenting Leicester until his injury; sadly I doubt we'll see him again this season and not sure that we have that ability to beat defenders and produce such a moment of magic elsewhere in the team. But it's happened, with Arter likely to return this month we will get back probably our most important player from last season; we're lacking that bite and creative spark currently with O'Kane alongside Surman.

PDS said:
Norwich seem pretty solid at the back and it will be a struggle to break them down
Click to expand...

hahahaha, funniest thing I've ever seen posted on this forum

I think Norwich will survive this season, but they'll need to start picking up points at home if they do. I know the same applies to all of the teams at that end of the table, but there is something about Norwich that impresses me.

Bare in mind my reference for defending is us. You are infinitely more solid at the back than we are

Ball crawls towards the goal line and hits the post.... Norwich can consider themselves a shade lucky to be leading at the break but the defending for their goal was pretty damn poor, too easy to walk through and slot in

Our worst performance if the season so far, no presence up top and woeful defending. Can only get better...

There was a 30-40 min period spread between the end of the first half and much of the second, in which Norwich were so much better, that I cannot remember the last time we were so comprehensively beaten. Probably when we were first promoted to the champ and we took a few beatings.

Our midfield was utterly toothless and our defence made too many individual errors.

A few 'if onlys' such as cook hitting the post etc, but no arguments that Norwich were much better and deserved the win.

Noticeable how our left flank did nothing all game, even when Ritchie was moved from right to left to try and bolster it. Those injuries on our left...

Work to do folks.

Heh, I guess the second half could be worse than the first. Utterly inept defending cost us, yet again it's 3 goals and 3 massive errors at the back that have led to them.

We're not only missing Arter but also a specialist defensive midfielder as O'Kane was even worse than against Leicester.

We always have one of these at the start of every season, it's just a shame it's come against Norwich and not a top 6 side because we didn't even make them work for it, just presented the 3 points on a plate... Yet the scoreline still somehow flattered us

See what I mean... Compared to us it looks like you have Baresi back there

Had a cracking day in Norwich, lovely place and friendly people, nice pubs and that.

Basically a brilliant day out ruined by a football match

How long is Charlie Daniels out for?

We're not quite sure but hoping only a few weeks now.

Great result. Pretty shaky start but quite comfortable in the end. First half very even but we got the opener and as a result, Bournemouth played straight into our hands in the second half. Perhaps trying a little to hard to force the equaliser? Created massive gaps for us to exploit - maybe lucky for them that they were playing us, a clinical side would have battered them. Finished with a routine set goal concession to make it look closer than it was.

The first half chance where you hit the post, what was the free-kick for? I was convinced you were going to score because it seemed such a nothing decision. Atkinson seemed to have one of those games tbh. No major decisions (as such) but some very soft free-kick awards while ignoring more obvious ones. Francis (?) was pretty fortunate not to get a second yellow, especially when you look at the incredible harsh booking of Wes.

On that subject, bloody love this guy... 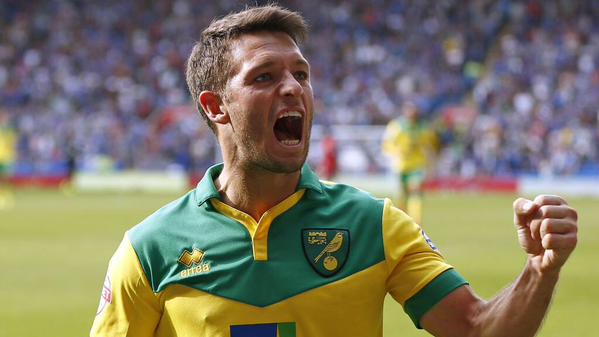 To think we almost lost him because of Hughton. What a moron that man was.


PDS said:
See what I mean... Compared to us it looks like you have Baresi back there
Click to expand...

hahah, yeah. Both defences looked pretty dodgy to begin with. Ours grew into the game, yours just couldn't settle (didn't help that your midfield kept losing the ball).

The lack of a specialist holding midfielder is going to hurt us so many times in games like that.

We gave the balll away too much, mostly because O'Kane couldn't get in our Championship side and Surman had his first bad game since joining. We really, really need Arter back to add creativity and a bit of a nasty streak in midfield

It was typical that Surman's most ineffectual performance for years was to come away at his old club who gave him to us for peanuts.

O'Kane has really struggled to these last couple games. Arter will need time, it's a worry. MacDonald?