I haven't said it until now but 1 win in 9 games, players arguing, no style of play, strange substitutions. Sorry Garry Monk #MonkOut #swans
Click to expand...

So good to end that run of defeats with a win today before the international break and the tough fixtures coming up. The clean sheet as well is most welcome. Stops people mentioning how we haven't had one yet.

Not pretty but Neil got his tactics spot on, result was more important than the performance. We let Swansea have all the possession they wanted but they barely threatened, don't think they even had a shot on target. Judging by his post-match comments, Monk still has no idea that he's just been played by Neil. "We looked the most likely." Well, not really. Sure you had the ball but you did fuck all with it. "We played the game we wanted 2 play." You played the game Neil wanted you to play, think about it. "I don't think any1 has had that much of the ball against #ncfc here this season." See, you know deep down it was by design.

Obviously doesn't fix our problems but still a massive relief. Need to build from it - which is going to be hard given our next few fixtures.

We've had a few games this season when we've played well and haven't managed to turn it into points, nice to see it the other way round today.

Mbokani is looking like he has what it takes to be a success at this level. A bit more pace and he'd have got a goal near the end I think as well.
A

Gomis heat map from y'day. We're the side supposedly attacking from top to bottom. 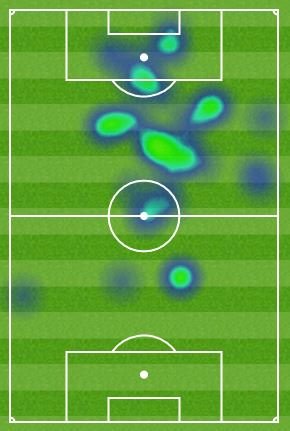 Jonny Howson scored the only goal of the game as Norwich ended a six-match winless run by beating Swansea 1-0 at Carrow Road on Saturday.
Norwich 1-0 Swansea