With some huge names missing...

How Ozil, Fuchs and Eriksen missed out is beyond me.

Apart from Alli and (only turned up in the last half of the season) and Payet (Injured for 4 months) every other player deserves to be there. 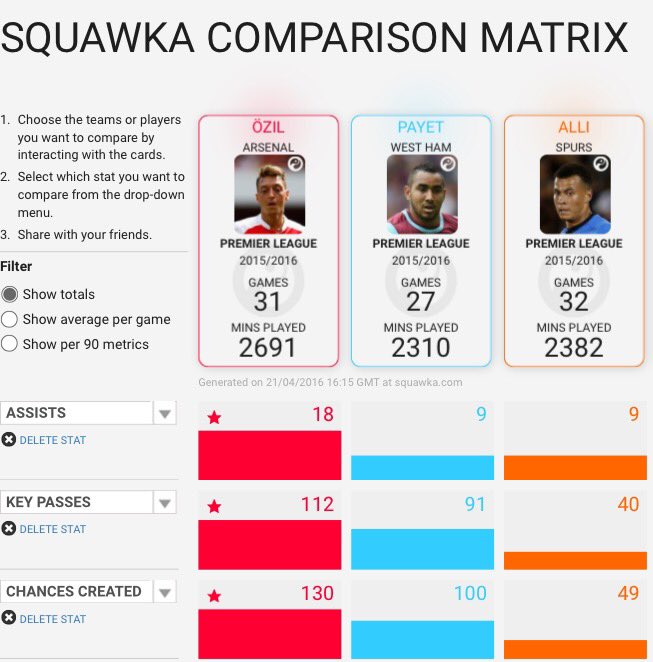 Consistency is key. Where's Ozil been these last few months?

Indeed, James Milner has been a monster assister recently, outperforming Ozil every week.

he's been our best player, its just that nobody can finish and we're shit.

And what about Alli for the first half of the season, or Payet being injured for 4 months. No consistency.

Nah mate, jumping the gun this lot. If Aguero nets 10 in his last 4 you'd have to pick him init.

And if we're talking about consistency, Mahrez is going a little under the radar on that front too. But they should both be in no doubt. Özil has almost broken the leagues assist record and with some competent strikers he would have smashed it already. Alli is having a good year for a 19 year old but if Özil was 19 and English he'd be in the team no questions asked, when it shouldn't be about age.

I love him and think he's been amazing, but Alli is riding the hype train.
Could make call for Özil as many do, but even keeping it at Spurs, Mousa Dembele have been better.

Proud of having four players in there, don't think that's happened before (?).
They are all deserving, albeit debatable if correct.

I've put Fuchs in my own, but Danny Rose have been amazing as well. Great that he's finally getting some recognition for his quality and improvement.

One thing I'm most pleased with is that Wes Morgan got in ahead of Huth. Everyone have taken Huth's place in the team as granted.
But I've always felt Morgan have been the better, just that Huth got noticed more due to important goals scored.
Not to mention that Huth is a disgusting ugly player, who kick and forearm smash players without getting penalised much this season.

Agüero is again punished from producing form late on in the season and the voting being done early.
Was even more obvious last season, when he wasn't much of a candidate early on, but went on to become top goal scorer from the later rounds of games.

Mousa Dembel has been better than Mesut Ozil? go back to bed.

These things are an absolute joke and have been for years, so I won't bother moaning.

SC49 said:
Mousa Dembel has been better than Mesut Ozil? go back to bed.
Click to expand...

I didn't say that, I said that even just keeping it at Spurs there would be better option than Alli in Dembele.
Just to point out that Alli is in there not only on performance, but also hype.

SC49 said:
These things are an absolute joke and have been for years,
Click to expand...

only 8 games this season mate. shame about his injuries in recent years, if not for them he'd be considered the dominant keeper in the world imvho and that.

Well it's not is it, cos Kante is in there with his massive 1 goal haul for the season.

Hurrah, one of our players.

Christian Slater said:
Hurrah, one of our players.

In goalkeeping ability, at least.

For me, Fuchs and Vertonghen should be the CBs. Maybe Eriksen instead of Payet, too.
S

epic73 said:
For me, Fuchs and Vertonghen should be the CBs. Maybe Eriksen instead of Payet, too.
Click to expand...

Why would you select a left back at centre back?! Very van Gaal of you

If Blind and Carrick can have a go why the fuch can't anyone else?

Stevencc said:
If Blind and Carrick can have a go why the fuch can't anyone else?
Click to expand...

Whitechapel said:
or Payet being injured for 4 months.
Click to expand...

Dimitri Payet was out injured for just under 2 months, he made his return on January the 12th against Bournemouth, a game we won 3-1.
A

claret50 said:
Dimitri Payet was out injured for just under 2 months, he made his return on January the 12th against Bournemouth, a game we won 3-1.
Click to expand...

Yup. Assuming he plays in the last four games, he'd have only missed 7 of the 38.

Cresswell is better than Rose and Fuchs... but then I would say that...

I think the selection gives a pretty fair reflection of the best team, of course every year there's gonna be close calls, you're never gonna please every body. There's a good chance Aguero's gonna finish above Kane and Vardy in goals scored in the league whilst being injured for half of it again, but where do you squeeze him in?

Dimitri Payet having the best season of his career: 12 goals, 9 assists