TB popped up on Skype this morning asking whether he thought this may be a worthwhile addition. The add-on as such isn't just a 'dislike' button, but admins can manually add words available to use to describe why a post is good, great, or absolute hot air. The issue is, I get the feeling this MAY lead to some complaints and a few issues with people not wanting 'dislikes' by their posting profile...but this is the internet in 2015 and I mean...who should get offended by someone not liking a post? (Never that simple)

I haven't explained that very well have I? So I'll add a link to the add-on.

2) If you went to your normal profile or alerts system it would tell you everytime someone likes your post, like it does now but with what they liked it for.

3) You would have your own nice little profile to look at inside your normal profile pages.

4) This is where the admins would list the words you are able to use as such.

So for example, Walsall sign someone and they aren't very good...but I rave them up to be amazing... someone may 'dislike' my post and dislike it for being 'a load of elephant sack' (providing we allowed use of that statement - which we wouldn't) but someone may 'like' it for being 'optimistic'.

It's just basically a bit of a fun that could bring a few laughs to the table. However, people can take the internet seriously and this along with the shoutbox upgrade is £45 out the budget, so if it's just going to cause a load of arguements, or be removed within a few weeks then it really is pointless as we don't get the finances back.

With that being said, after a pretty crap explanation...we are a place for the people.

So let's leave this to poll.

I've voted no, it wouldn't be used properly and would just cause unnecessary confrontation.

Aberstone said:
I've voted no, it wouldn't be used properly and would just cause unnecessary confrontation.
Click to expand...

The admins control the terms of it use, so we would be able to be strict on what reasons were given.

For example, someone doesn't like a post..we could just let the negative terms be 'Disagree' or 'Not a fan'.

We could be a little more open with the positives terms...

X person gets the ban 'Astounding news'. So there is limits on it that we can monitor.

No prizes for guessing which way Red will vote.

Dislikes will lead to some people getting hammered for no good reason.
And generally the tone of a post is indicative of why people like it. If you've posted something funny then that's why they like it. If it's a well explained theory on why a team will win a competition you know why it's being liked. You don't post up the latter and then wonder if they liked the post because they thought your explanation of how to use a 5 man midfield was fucking hilarious and made them piss themselves.

I've seen this implemented on a different forum and it was cool at first but the novelty soon wore off. People stopped using it and I don't think it's particularly worth the money or hassle.

I've voted no, think that too many features will just make it messy

I've seen it being used on the Bradford Forum, and it looks incredibly tinpot.

Keep it simple. It's working very well as it is. 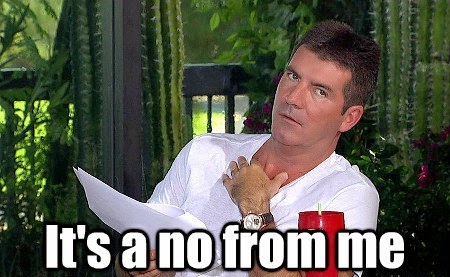 I've seen this implemented on a different forum and it was cool at first but the novelty soon wore off. People stopped using it and I don't think it's particularly worth the money or hassle.
Click to expand...

GodsGift said:
No prizes for guessing which way Red will vote.
Click to expand...

Being absolutely honest mate and I'm really not messing about, I'm not that fussed either way. If it's going to cost money to implement it I'd say don't bother unless a substantial majority want it. I say a substantial majority and not just a majority because it could potentially be divisive.
You must log in or register to reply here.
Share:
Facebook Twitter Reddit Pinterest Tumblr WhatsApp Email Share Link