Pro's you knew (of) before they became professional/famous?

Just wondering if anyone knew a pro before they became big.

Kieran Tripper (Burnley) - Used to go to my high school and was in year 11 when I was in year 7. Lived in the town I lived in and played footy for the school.

Nicky Ajose (Leeds/Crewe) - A Bury lad, a few of my mates knew him as he went to another local high school. Someone in my year lived next door to him.

Anyone got any other examples?

Paul Robinson used to drive along with my brother's (SEN) school minibus driver in the year or two before he became Leeds' number one, signed photograph for me and an England tracksuit for my old man

Went to school with Drew Talbot. Brother in law grew up with Danny Rose. Think that's it.

Went to school with Max Power. Think White Army did too, iirc.
U

Craig said:
Went to school with Drew Talbot. Brother in law grew up with Danny Rose. Think that's it.
Click to expand...

Strangely, I never got to see how good Trippier was with him being 5/6 years older, I imagine he was immense
U

Andrei Jones (Gateshead) - Used to live with a fellow youth player (Dave Thompson) in my aunties house whilst scholars of the youth team. He came round to mine once for tea. Played about 30 games for Bury.

Trippier was class for us, was bitterly disappointed when we couldn't make him a permanent signing here.

went to school, in same year as, Sam Byram of Leeds
W

Tommy Rowe was in the same year/primary school football team as me.

Have to say I'm gutted I won't be able to say I know John Stones when he becomes England captain. Do remember asking for his shirt after the final game of the 2011/12 season though. Didn't give it me as he wanted to keep his first pro shirt.

Lewis McGugan was 4/5 years older than me but played for the same local side, is from Long Eaton and I always saw him hanging around place. One of those that everyone knew would make it because he's so good technically, as a person? Hmm.

There's also a strange amount of lads in my year who I remember playing against regularly as a kid - Tendayi Darikwa played for West Bridgford Colts and frankly, I'm surprised he ended up a professional footballer. Must have been a late developer. Kieron Freeman of Sheff Utd played for another team we played against regularly, Pelican, and he was good - nice lad too...and then Jordan Mutch but that was when I was really little because he was one of those that got snapped up by an academy at a really young age IIRC.

Son of Cod, wherever he is, will know a player called Anthony Church who signed for Grimsby 3/4 years or so ago when I was in my first year at Uni and my flatmate played with him for the Uni (Church played semi-pro for Boston along with a few others at weekends) and when Grimsby signed him they gave him a £10k (I think, it was something very close to that anyway) signing-on bonus and he bought drinks for people one night, that was fun, I was on the nice champers and that thanks to him on a Wednesday night in some shite little Loughborough bar. Just googled him and he plays for Bishop's Stortford now apparently.

Played against Jack Wilshere's Letchworth Garden City Eagles team at youth level. Pretty sure he played a year above himself, they were our big rivals at the time. He wasn't that much better than me either.. honest. Was also good mates with his cousin at school.

Also played against Corey Smith (Bristol City) when he was at Pansangher Yellows in a county cup semi-final, very good player but complete bellend.

Wycombes Paul Hayes lived on my road and was the year above me at school, I used to play football with him alot back in the day, he even broke my wrist by taking a penalty against me, I saved it but he hit the ball so hard it broke my wrist. Not suprised he made it as pro, he was one of those people who was clearly very good and I wasn't suprised to see him start playing for Scunthorpe back in 2003.

Paul Konchesky went to my school although a couple of years above me. He was in my brother-in-law's year so he knew him reasonably well.

I had a beer with Liam Hatch once when he was at Barnet (straight after a game - could have been when they beat Stockport who were on that amazing run of not conceding for a silly number of games with Wayne Hennessey in goal) as he knew a girl I worked with.

I played with a lad at youth level who's currently in Liverpool's academy (Rhian Brewster). Obviously not a pro but he had bags of ability back then and this was a good 6 or 7 years ago, and I'm glad to see he's still making a go of it at a top club after being released by Chelsea's academy.

Orient's back-up goalkeeper last season Jake Larkins was a couple of years above me at school as well, had a blinder against Wolves but was released and not almost definitely now plays in non-league. There's also a lad who was/is two years below me and was called up to Portugal's U16's which I find pretty insane.
P

UpTheShakers said:
Just wondering if anyone knew a pro before they became big.

Kieran Tripper (Burnley) - Used to go to my high school and was in year 11 when I was in year 7. Lived in the town I lived in and played footy for the school.
Click to expand...

I grew up on the same estate as Kieran Trippier. Went to Woodhey also. I was a couple of years older than him but we used to play football on Summerseat Park quite a bit when we were younger. Knew his older brother Kelvin too; he played for Oldham for a while [amongst other lower league clubs]. Think he's playing in Australia now.

He was already 'famous' but when I was born and bought home Colin Calderwood lived next door. Tom Naylor who's currently on loan at Burton, and has had spells with Cambridge and Newport in L2 from Derby was 2 years above me at School.

Best I can muster up is knowing Callum Saunders - son of Dean Saunders obviously, he made his debut for Crewe this season and was supposedly attracting Premier League interest at the time. I would say if he's changed or not but truth be told he was always known as a bit of an arsehole.

Jack Saville used to see a girl I lived with while I was at Bournemouth Uni.

We used to go out every Wednesday night, come home about 4, those 2 would have a row, and he'd drive back to Southampton the next morning.

I once played against Aberdeen and ex Oldham striker Scott Vernon when I was 11. We lost 8-0 and he scored all of them.
V

Went to school with some goalkeeper who plays for Man City nowadays, don't think he amounted to much

Went to school with Grazioli. He was a year below me and scored for fun back then as well.

A bit of a tenuous one, I met a Spurs youngster, Ross D'arcy in the pub, as my old man knew him to chat to him. We were chatting about football and I told him that I supported Barnet. He then told me he was signing for us on Monday... and he did.

Apparently I may have played several times against Joe Ralls when I was a kid, used to compete in the same area and he's only slightly younger. Can't remember him tbh, but know some people who know him through that.

Also used to have a mate who was very friendly with Aaron Ramsey when they were younger (visited him in hospital when he broke his leg). Promised me that I would get the chance to meet him, never did.

Michael Sisson was in the year above me at school. Even after he got famous he used to say hello to me every time I saw him in the Palais in Mansfield. Here he is stood between Bobby Hassell and Liam Lawrence. 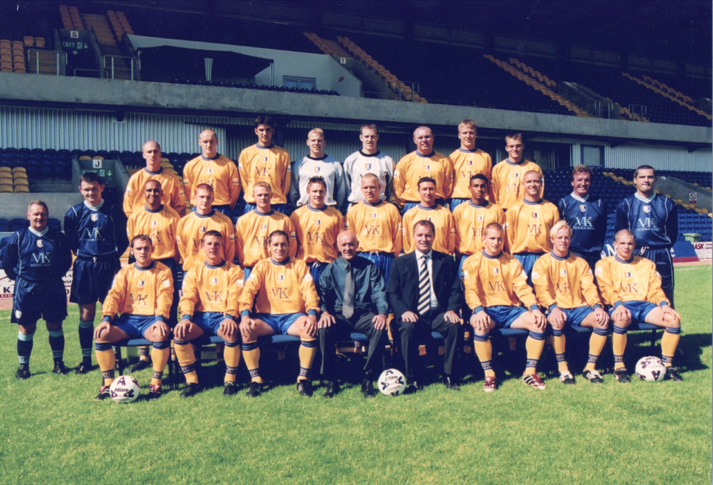 Stagat said:
Michael Sisson was in the year above me at school. Even after he got famous he used to say hello to me every time I saw him in the Palais in Mansfield. Here he is stood between Bobby Hassell and Liam Lawrence.

What a side that was.

That Fat Centre Half said:
Jack Saville used to see a girl I lived with while I was at Bournemouth Uni.

We used to go out every Wednesday night, come home about 4, those 2 would have a row, and he'd drive back to Southampton the next morning.
Click to expand...

Girl in the flat above me at Uni's boyfriend is/was Shaun Jeffers who is at Newport I believe, he was there all the time, was quiet but seemed a nice chap, he was at Coventry at the time.

Used to go to the same child minders after school as Alex Oxlade Chaimberlain.

And played half a season for AFC Portchester with James Ward Prowse's brother. (He's complete opposite though).

Used to sit next to Oliver Norwood (of Reading) in Maths, good friend of mine but sadly we've lost contact over the years. Used to live across the road from James Anderson, played football with him a couple of times, if it wasn't for him being so good at cricket he'd have made a decent footballer too.