The football pales in significance a bit today. Nice touch from Noel Hunt after a young fan passed away yesterday morning. 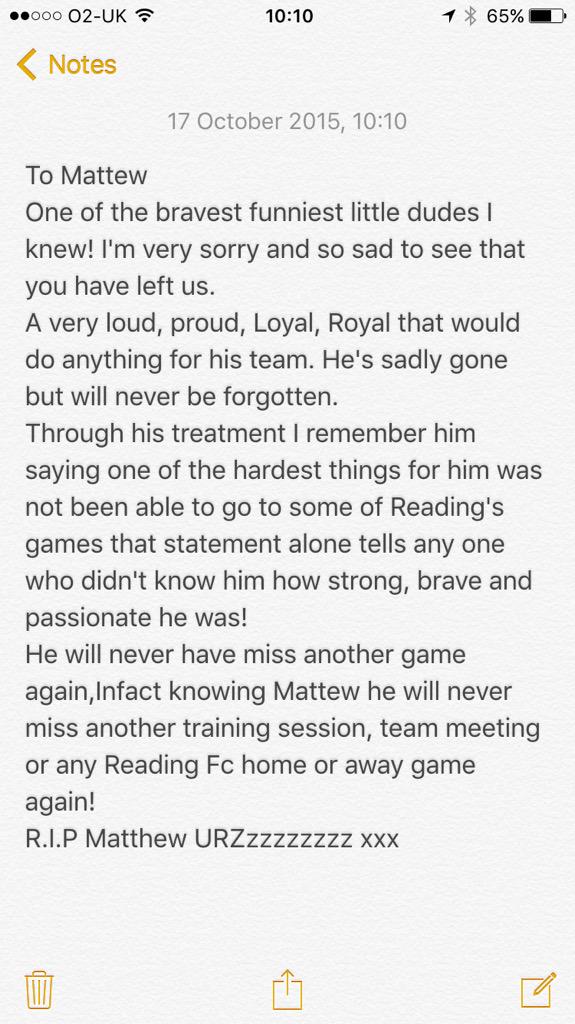 Nice words from Hunty. He has always been a credit to the club.

As for the game i think this will be closer than some people think. 2-1 win.

Played poor today but good that we still got the win. We will have to get used to teams coming to the Madejski making it hard for us to break them down.

We do that to teams to be fair.. MK Dons only managed 3 and Middlesbrough 6 in some of our previous home games.

Did seem like you were just there to hold out for a 0-0. Almost worked to be fair.

Hopefully for us that was just rustiness from the international break. Will have to step our game up against better teams.

I think we are just utter shit to be honest.

Not a one-off for us.

What was worrying if you support Charlton was the lack of fight when they went behind. We were playing keep ball as if it were a training exercise. They were just stood off watching and not even bothering to close us down.

I can't even remember when the second shot was.

Dazza said:
What was worrying if you support Charlton was the lack of fight when they went behind. We were playing keep ball as if it were a training exercise. They were just stood off watching and not even bothering to close us down.
Click to expand...

Again, not a one-off for us.

No idea what has happened, we were great in August, playing good football and the team were playing for each other and the manager (remember Luzon's celebrations after our late winner against Hull) but since coming back from the first international break we have been absolutely pathetic.

Our squad is terrible too which doesn't help, yesterday we had Ahearne-Grant up front on his own and at one point (after the sending off, granted) we had Morgan Fox at CB, Morgan Fox is dreadful in his natural position of LB for crying out loud!
You must log in or register to reply here.
Share:
Facebook Twitter Reddit Pinterest Tumblr WhatsApp Email Share Link