Could go either way.

A nice boring 0-0 draw or a loss to send Van Gaal on his way, I reckon.

anyone just listen to the press conference??? Oh dear LVG

He looks on the verge of tears at points.

That's got me rooting for Louis.

I hope you fucking SMASH Stoke.

Stevencc said:
A nice boring 0-0 draw or a loss to send Van Gaal on his way, I reckon.
Click to expand...

As long as he does not go before Stoke game...I need my Bojan points

I thought that was boss from Van Gaal.

He looks on the verge of tears at points.
Click to expand...

Watching this a few times I actually feel "kinda" sorry for him in a way. He makes some decent points about how the media ridicule him, his family etc. He's a decent bloke but he needs to get with the program , and quick for his sake

Any high profile manager taking a high profile job on these shores should know that they will have to play the media game throughout their tenure for better or worse. If he wasn't aware of that before his appointment then he's been incredibly naïve.
Perhaps he was fully aware but never really expected to find himself in this position, which I'd expect is the case given his ego. He's not far from Mourinho in that respect.

JimJams said:
Any high profile manager taking a high profile job on these shores should know that they will have to play the media game throughout their tenure for better or worse.
Click to expand...

It's a bit insulting the way the media have been writing about him as if he's already gone. That's not just about "the media game". It's one thing writing about how a manager really needs to change things around and soon, and writing about how he has failed and how he's already practically sacked. I totally understand that Van Gaal - or any manager in a similar position - doesn't want on one hand to read all that negative and mocking stuff that the press writes and on the other hand then just treat them nice and answer their questions nicely. He fired a shot or two back at the press and good on him for doing that, imo.


Anyway, two hours until this one kicks-off. I have just poured my first whisky of the day, just in case this match alone isn't enough to send me to a little refreshing nap before the Liverpool game.

I dreamed on Christmas Eve that Stoke would win 2-1. Duly put a tenner on this outcome, because you have to follow your dreams.

But last night I dreamed that United would win 2-1 (or at least be 2-1 up at some point), rendering my bet futile. What am I supposed to do now, put another bet on the opposite outcome? Accept the Jungian school that the limit of dreams' mystical power is that they are some sort of processing of unconscious anxieties through primitive, innate symbolism, and that United's flip-flopping fortunes in my sleep are not a prediction of how Louis Van Gaal's press conference might galvanise his team or otherwise, but instead a reflection on my own repressed career and relationship worries? Or, worse still, just billions of neurons in my brain firing totally arbitrarily, creating random associations which my sleeping mind contextualises in Premier League football terms, but which are essentially without function or meaning?

Anyway, if Arnautovic is on form I could be in line for £140, so get stuck in lad. 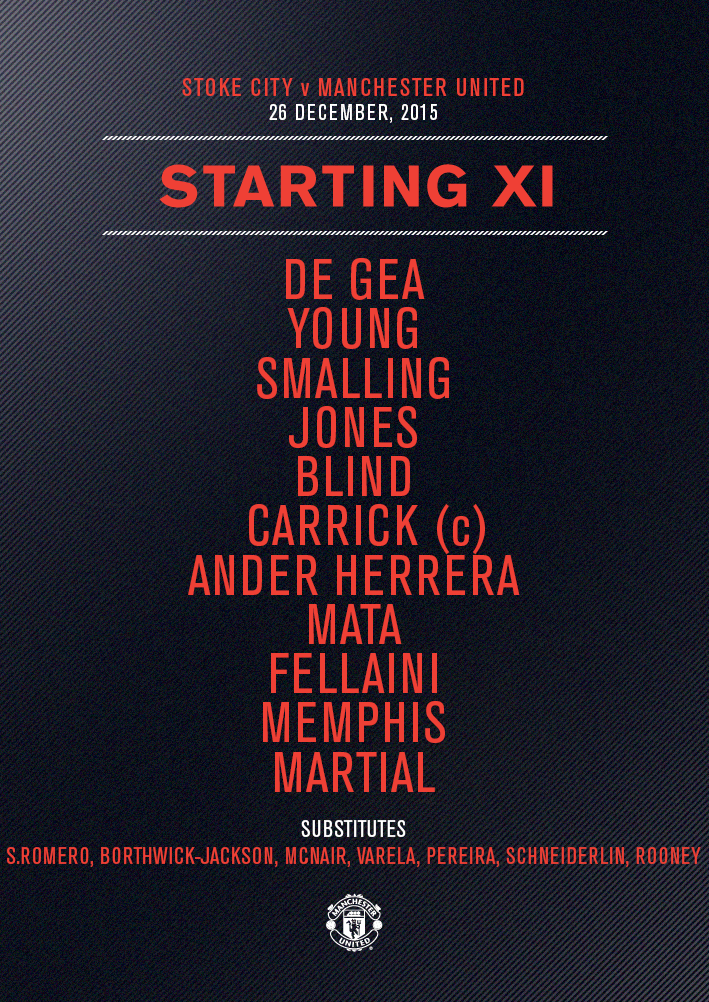 So he benches Rooney finally when his job is on the line, as well as starting Herrera.

Christian Slater said:
So he benches Rooney finally when his job is on the line, as well as starting Herrera.
Click to expand...

Yet persists with Fellaini - there is still some madness in the method.

I'm not too fussed with Fellaini starting, although he's red card risk against a game Stoke. Schneiderlin hasn't shown me anything for me to clamour for him to start.
W

Stevencc said:
Yet persists with Fellaini - there is still some madness in the method.
Click to expand...

Possibly going back to the same formation which got him success last season?

Oh my god that is absolutely embarrassing by flop of the season Memphis Depay.

Smooth work from Depay there, nice one.

WOW What a goal

van gaal and his philosophy

Fantastic strike, no saving that one.