Tower in Dubai on fire

I know this doesn't affect anybody on here, but one of Dubai's most iconic buildings, Torch Tower is currently up in flames. It's 4:30am here and we were woken up by sirens about an hour ago. The building is about 500 metres from ours.

We've got quite a few friends who live in the building, who are all safe. Just spoke to a friend who lives in the 44th floor who said it started 3 or 4 floors above theirs. The tower itself is about 80 floors high.

The pictures are terrifying. We just took a walk down to see if we could help in any way, and there is debris everywhere. The fire is still ongoing but looks slightly more under control than before.

I'll see if I can upload some photos. 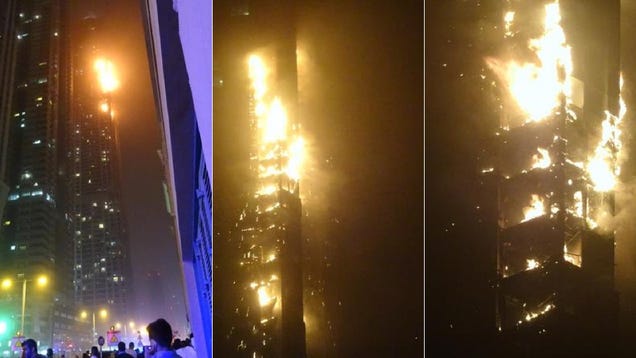 Glad to hear your wif...I mean, everyone is safe.

Holy shit, that looks exactly like The Towering Inferno. Hope all are ok.

Hope everyone is safe

Jesus christ what started it? Hope everyone in the building was able to evacuate and are safe.

How long do we have to wait before mentioning the irony of it's name?

I hardly ever leave the Palm unless it's to the airport so I can't recall which side of the Marina it's on, but is that just off the road from the Marriott?

looks terrifying, saw it on bbc this morning, obviously hope everyone's ok although that appears very unlikely looking at those. So many homes destroyed, no idea on building but surely there's something that should prevent a fire in one apartment spreading quite like that!?

Hundreds of people were evacuated and there are no reports of any casualties.

Ebeneezer Goode said:
Hundreds of people were evacuated and there are no reports of any casualties.
Click to expand...

quite amazing to be fair

Especially with the tat they throw up in Dubai.
P

We've currently got a friend staying with us who lived on the 66th floor. Her apartment is in the worst affected area so she's pretty distraught. Contents insurance in Dubai is pretty rare, especially with expats who are renting. Needless to say she didn't have it so has literally lost everything she owns. She wasn't in her apartment at the time, so all passport, laptop etc is also lost. The only hope for people is that the buildings outside facade took the brunt of the damage and the inside is less affected.

The building has had some kind of check done on it and the structure has been deemed safe. They have let everyone who is below the 28th floor back in to collect belongings.

Drove past it today and there is still a lot of debris lying on the floor, however there is absolutely no police cordon, despite what looks like bits of paper still flying off the building. We are having incredibly high winds at the moment which isn't helping, and definitely helped the fire spread last night.

A similar thing happened to a building here in 2012 called Tamweel. It has been deserted since that night, because the damage was so bad and the developer of the building didn't have the funds for repair. This is a different story. The building is owned by the Select Group, which is the same group that own the building I live in (about 500 metres away from Torch Tower). And this one of the iconic and most well know buildings in the Marina area. The Marina itself is probably the most well known area of Dubai. The government won't want this being left and will do everything they can to get it sorted asap so it doesn't damage the city's reputation too much.
P

Dziga Vertov said:
I hardly ever leave the Palm unless it's to the airport so I can't recall which side of the Marina it's on, but is that just off the road from the Marriott?
Click to expand...

I feel a little sorry for you if you never leave the Palm. Hate the place myself!

Torch is on the road directly behind the Beach road. Opposite Barasti, right behind Princess Tower and about 100 metres from the Marriott.

Oh shit. The thought of being in a building like that when it goes up in flames is terrifying. Stunning that nobody was hurt.

For people like your friend who's staying with you I can only imagine how much it sucks losing everything she owns. But if they can sort it out as fast as you seem to think they will, at least she'll hopefully get her home back sooner rather than later, which is a start. Hope they get that building back up to scratch pretty soon though. Not just for people like your friend, but because the marina is a beautiful area and I remember taking a fair few pictures of the Torch myself when I was over in 2013 as it's a nice tower.

Ebeneezer Goode said:
How long do we have to wait before mentioning the irony of it's name?
Click to expand...

Glad that people hadn't lost their lives, but can't imagine the feeling of not knowing whether you've lost all your possessions or not. It's all material stuff and blaa di blaa but still.
P

My darling other half and friend have gone down to the tower to see if they could get any more information and they've been allowed to go up to the apartment to collect her passport. There is a working lift that goes up to somewhere around floor 36 seemingly, and then they will have to walk the remaining 30 floors.

To me, I can't quite understand how they are allowing people to go up there so soon after. I don't know much about fires in high rises, but I can imagine there is a lot of damage to the interior, even if it is just water damage.

I get the feeling that the outside of the building bore the brunt of the flames, whilst most of the interior came out relatively unscathed. It would certainly explain the fact there were no injuries and the images of the building that I have seen today where the outside is completely destroyed, yet the curtains on the inside of the apartments are untouched.

hope that's right Posh. Does seem very off they'd allow people up so soon. Must be all sorts of structural damage regardless.

Glad to hear it's looking like nobody was hurt, fingers crossed they figure out how it happened.

blade1889 said:
hope that's right Posh. Does seem very off they'd allow people up so soon. Must be all sorts of structural damage regardless.
Click to expand...

From a fire? I doubt it.

Ebeneezer Goode said:
From a fire? I doubt it.
Click to expand...

to be honest I dont know much about it but would've thought so. Happy to be wrong though.
P

So when my friend got down to the tower last night, they told her they could go up to the apartment. Bear in mind her side of the tower was directly hit by the fire. The building is 79 storeys high. She's on 66th floor. On the pic below, you can count the floors down from the top in the worst affected area and that's hers.

Have the conspiracy theories started yet?
P

Just a fire that was started on a balcony, that set fire to the outer cladding of the building, with the inside being relatively unaffected.

Great job by the firefighters on scene.
S

Amazing stuff, and very lucky for all concerned.

My mate lives there on the 21st floor, luckily his apartment hasn't been damaged.

It's a pretty iconic building in Dubai, there's a billiard place at the bottom of it so i spend plenty of time there.
P

We went up to her apartment yesterday. The balcony is pretty fucked, but the inside is fine!

This is/was the balcony. You can see where the glass used to be. That post was the horizontal beam that held the outer glass on the balcony.

This is from her dining area (which is untouched), looking out of the window which has a little damage.

And this image is similar to the first, but shows how the balcony doors pretty much protected the inside of the apartment.