BURY boss David Flitcroft is confident his side can continue their impressive early season form when they take on Wycombe Wanderers on Saturday.

Currently sitting in sixth position in League Two, the Shakers will have the opportunity to leapfrog their hosts with victory at Adams Park who lie in fifth place just on goal difference.

In a recent interview Flitcroft had this to say,

“I look at the 10 points that we have earned and barring four minutes at Luton we should be sat on 12, so we have had a fantastic start ourselves, but there is a lot more to come.

“I feel that there is more improvement to come in this squad, we have only been working together for probably eight to ten weeks now so it is only early in the season. We have got a group of players here that want to get better and we will keep progressing, there is no doubt about that.”

The Shakers will be without skipper Jim McNulty, who is ruled out through suspension after his red card against Accrington Stanley last weekend, however Clive Platt could return after the summer out with a calf problem, while Craig Jones, who has not started since the opening match, played another 45 minutes behind closed doors on Monday to add to his substitute appearance in last Saturday’s 2-1 win against Accrington.

Daniel Nardiello and Joe Thompson are out of contention, but Flitcroft is confident his squad is strong enough to deal with the absentees.

Danny Rose has stood in for Nardiello since his injury and has scored 4 goals in his last 4 games, including his loan spell at the end of last season that makes it 7 in 10 for the young Bury striker.

With Jim McNulty out the obvious replacement is young central defender Keil O'Brien who could make his first team debut if Flitcroft wishes to keep his 3-5-2 formation, otherwise he could revert to a more traditional 4-4-2.

Until the last 2 games between the sides last season I would have had Wycombe as one of Bury's bogey teams as wins were scarce, but Bury took 6 points off The Chairboys which were very welcome.
The overall stats has Wycombe still with the edge though with 12 wins to Bury's 9 wins and 6 draws.

Wycombe are likely to name an unchanged side from their 0-0 draw at York City last weekend.

On a lighter side, some information if you are travelling to Adams Park by car, do not park in the VIP car park, even if you have an invite, as they do not let you out until all the other car parks are empty, my last visit there saw a 4-0 defeat followed by an hours wait before we could leave, stuck in the car whilst all the home fans walk by your car, not the best of the days!!!

Below is what I think the Bury formation will be for tomorrow's game, but there could be a few changes because of the skipper's suspension. 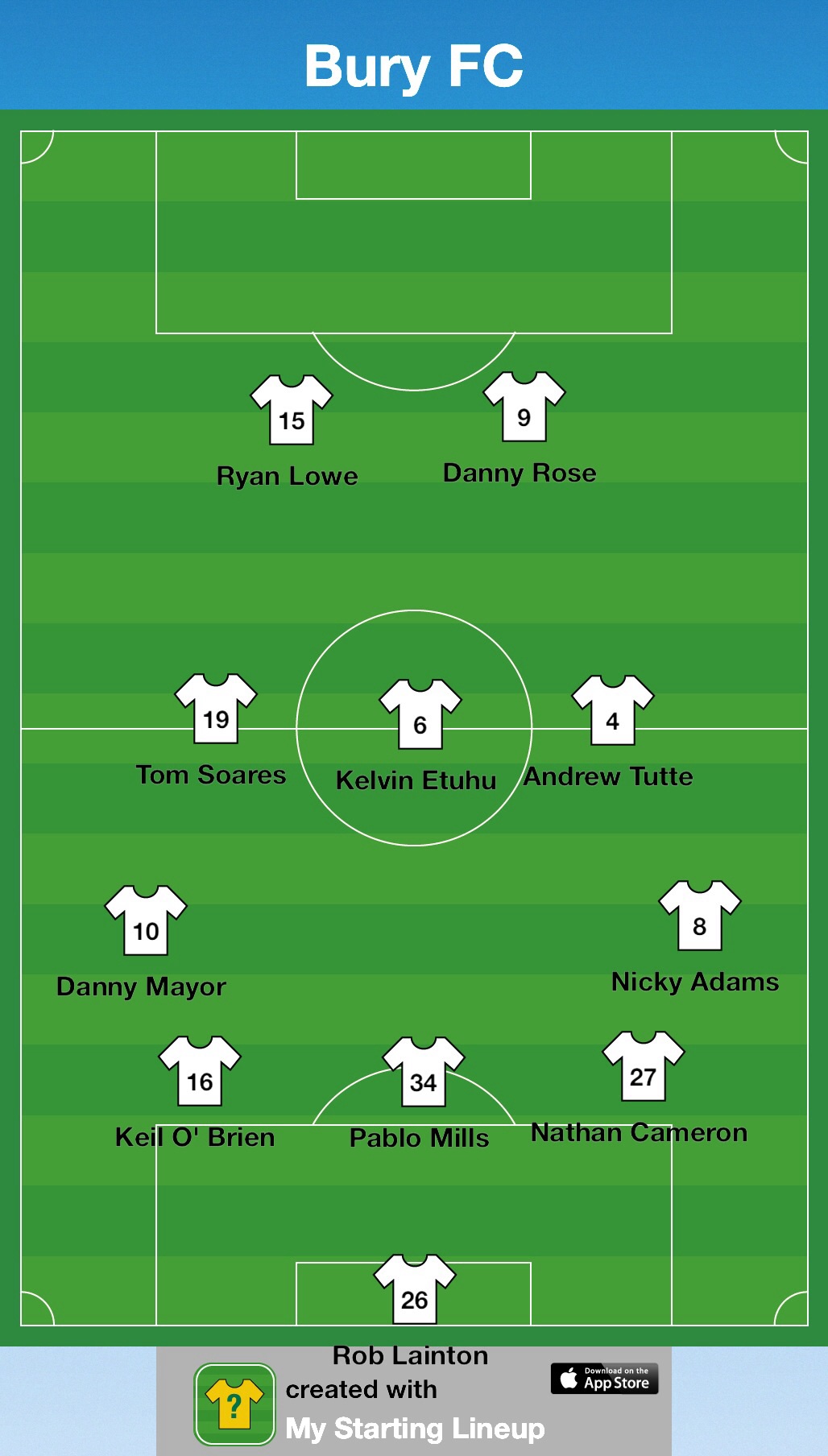 I expect the game to be close fought match, although I had Wycombe down for relegation this season as they escaped last season by only goal difference. This should be Bury's first real test of the season although Accrington was a hard fought 3 points last week,

My prediction is a 2-1 win for Bury although I wouldn't be disappointed with a draw considering the start Wycombe have made.

Good luck to the boys tomorrow and safe journey to all Bury fans who are making the 400 mile round trip.