Well, the fixtures for the new season are almost out, but before that, we have the 1st round draw for the League Cup. As per, the draw is regionalised and seeded. Unless someone can find the info, I can't see any confirmation as to who is in the north and south pots bar the obvious teams.

Here are the splits I think are likely:

Not sure how they'll get the match ups right, but I think we are looking at some bizarre draws tomorrow, mostly for those teams in the midlands.

Anyway, that aside, who do you want to see your side get? One of the easier seeds/unseeded teams? A decent away draw? A reasonable home game?

Me personally, I wouldn't mind Middlesborough or Hull away, never done either of those 2 grounds. Plenty of winnable draws to be had too. Looking forward to this tomorrow, lets hope we get a decent draw.

We always seem to get a North West team, usually Morecambe.

If we have to have an away game, I'd like Cambridge, Orient or Barnet. Otherwise, any at home will suffice.

Any away tie except Barnsley, Sheffield United, Bradford, Fleetwood, Chesterfield or Preston.

Hull or Middlesbrough at home.

Blackburn away. Nice easy drive up the A666.

Birmingham away or something. Don't want shit like Dagenham again.

I would like either Brighton or Fulham away if possible please.

Blackpool at home, decent chance to progress and draw Sjoke @ the Shitania in round 2.

I couldn't give a shit who we get. The first round is pretty uneventful with wank crowds. Probably get sheff Utd away again..

Don't really mind but I'd quite like Barnet just to give Martin Allen a round of applause.

Other than that it'll be nice not to have Brizzle City.

Well you can't get Dagenham, coz you're both unseeded.

TomPNE94 said:
Well you can't get Dagenham, coz you're both unseeded.
Click to expand...

Wolves in the Southern draw

Walsall are in the Northern Draw yet they are south of Wolves geographically. Maybe it's because of the seeding.

Walsall are in the Northern Draw yet they are south of Wolves geographically. Maybe it's because of the seeding.
Click to expand...

They aren't official, just his guesses. 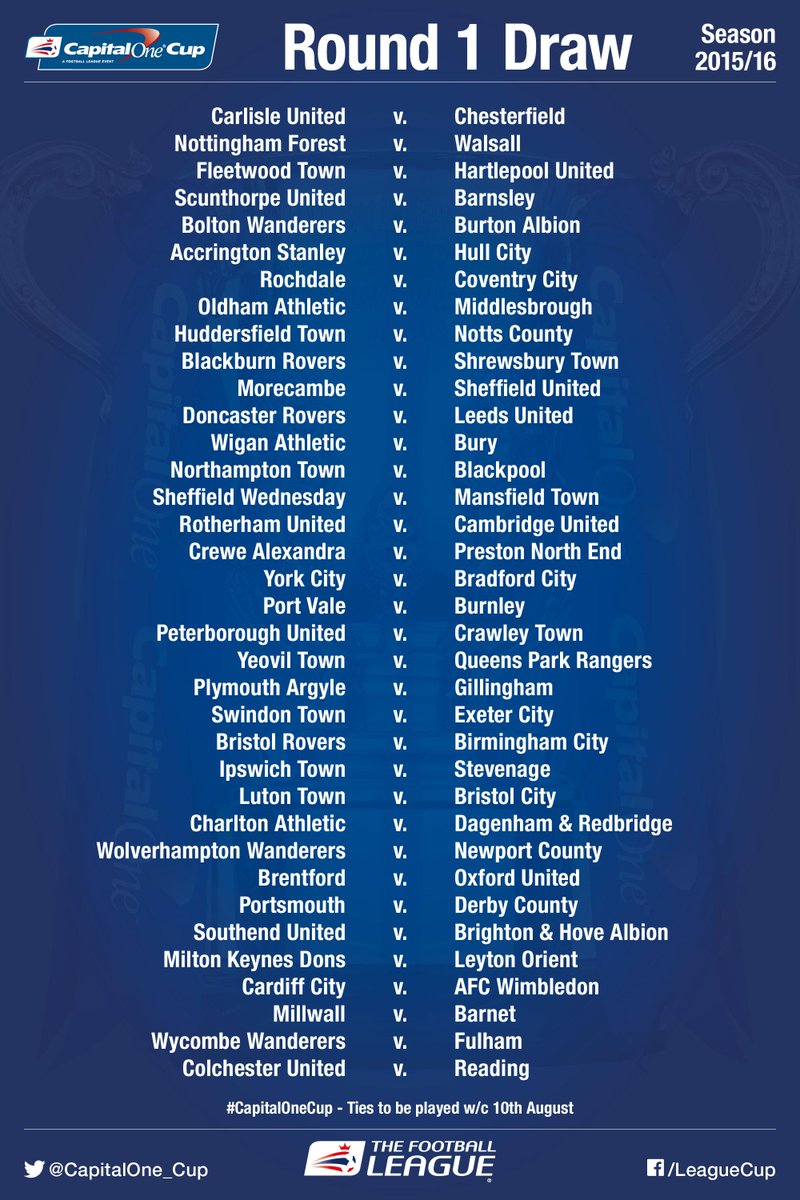 New ground for me happy with that

Lol, what sort of stellar fixture were you expecting?

It's the League Cup 1st Round.

SF_ said:
Lol, what sort of stellar fixture were you expecting?

It's the League Cup 1st Round.
Click to expand...

somewhere I've never been before was the hope, not a ground where we are utter shite

TomPNE94 said:
somewhere I've never been before was the hope, not a ground where we are utter shite
Click to expand...

Out of the unseeded pile, only Accrington, Morecambe and York would have been half-decent and nah, Crewe are fucking shite.

We will play a reserve team either way.

Reading at home is decent enough, I feel like we haven't played Reading for years so it's nice to have a bit of fresh opposition. Winnable as well.

Plymouth away shit draw couldn't have got a longer trip

GFC4EVA said:
Plymouth away shit draw couldn't have got a longer trip

then us in the second round

Fucking 'ell, even the League Cup is dicking us distance wise this year.