Not sure if anyone has picked up on this but here's the Tony Kempster forum non league projections for next season:

Can we have trigger warnings in place for any content that mentions Halifax Town being in the Conference North, please?

Silly season approaches. A draft constitution of league memberships for next season is apparently due any day now.

We're currently being placed in the Northern Prem Div 1 South, which will be an absolute pain personally as I am based in London. For the club it's likely to be a pain as it's a significant increase in average traveling times/expenses I believe and it is also meant to be a stronger division. The Southern League Div 1 Central has lost a number of it's best clubs each year due to reshuffling and this has probably made it the weakest step 4 division.

There are some interesting rumours floating around that despite passing ground grading Kings Langley may wish to decline promotion due to financial reasons, with the current chairman planning to resign as soon as a new money man can be found to take his place and fund such moves. If this happens then it will lead to a reprieve for Bedworth United as the highest relegated side from the Southern Premier. If the FA decide to promote a second club from the division instead of repreieve above then Royston are likely to get the nod having finished 2nd, while a couple of Diamonds fans are grasping at the straws that it should go to the losing playoff finalists...

The projections show no sideways moves at step 3 which is a bit of a surprise. Some from the Southern League are suggesting that Redditch might go north and join other clubs around the Birmingham area in that league giving Corby to the Southern League. Should Kings Langley actually take their promotion then they would be prime candidates to end up in the Isthmian Premier too being just north of Watford, though it doesn't look like the Isthmian need to pass any clubs to the Southern league.

Well I'd barely posted this and the FA have put up their league allocations for steps 1-4 (n.b. provisional as AGM cups still pending).

Looks like the spreadsheet got it all right this time around, unless I've missed something. 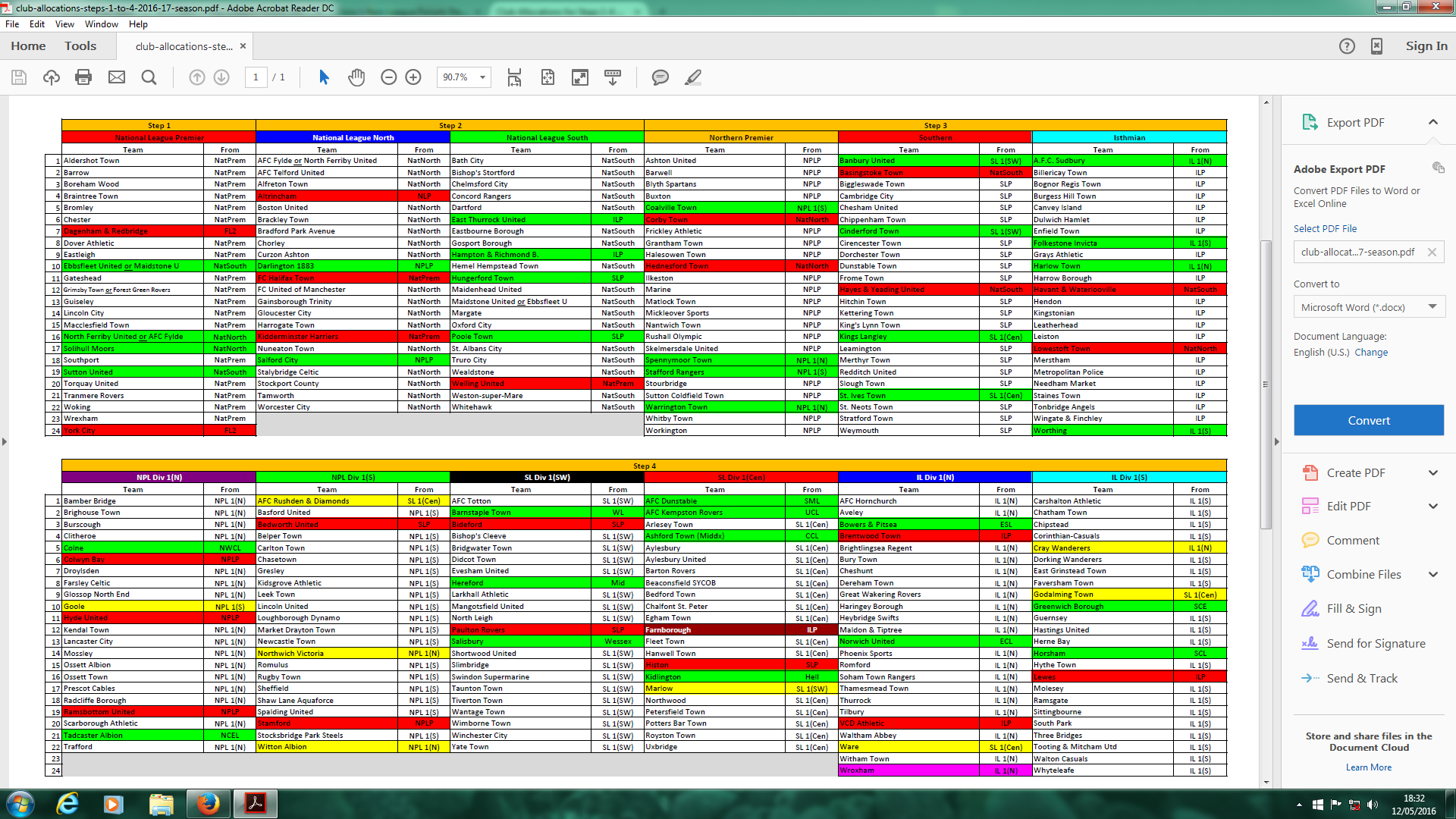 nice to see our projected position.... and York, Wrexham and Tranmere going down...

(yes I do know it's alphabetical )

Havant to Lowestoft will be a fun Tuesday night fixture

could be worse..... Barrow or Gateshead to Torquay or Dover....

Truro could throw a spanner in the works....their owner's threatening to pull them out the conference and drop down a few leagues.

you won't have to worry about that if you beat Webbed Feet at the weekend....

chipmunx said:
nice to see our projected position.... and York, Wrexham and Tranmere going down...

(yes I do know it's alphabetical )
Click to expand...

I'd be delighted with 13th

The allocations show that the league system, principally at counties level, remains stupidly skewed towards the south and is demonstrated yet again by several southern teams transferring upwards. I firmly believe that at Step 5 a couple more northern leagues should be established with FA funding to get infrastructure up to scratch, or that half the Northern League should be transferred up to Step 4 with some tinkering elsewhere to tie up loose ends. Eight of the 14 leagues at Step 5 are based south of Milton Keynes, so when Atlético Rushden or Corby get moved into the Ee Up leagues, or Godalming back into the Central, chances are they're gonna stay up there and can complain about travel expenses until the cows come home. Even the Conference North being as "northern" as it is this season is an outlier for now. The likes of Bishop's Stropford or Brainfreeze will become staples in it in time.

Surprised we've been out in Southern League over Havant and Waterlooville...FA Seem to have no clue that we have been 'recommended' to return home,, which SURELY is with Isthmian 'boundaries'

Raymondo316 said:
Another weird one
Kings Lynn stay in the Southern Premier yet Corby are put into the Northern Premier
Click to expand...

The imaginary north–south line tends to go from west-southwest to east-northeast for some reason. Chester were once in the Evo-Stik North ahead of Goole, 35 miles north. Then of course, Scarborough played in the South a couple of seasons ago.

Pliny Harris said:
The imaginary north–south line tends to go from west-southwest to east-northeast for some reason. Chester were once in the Evo-Stik North ahead of Goole, 35 miles north. Then of course, Scarborough played in the South a couple of seasons ago.
Click to expand...

Scarborough in the south is ridiculous....

chipmunx said:
could be worse..... Barrow or Gateshead to Torquay or Dover....
Click to expand...

Havant & Lowestoft both play in a 'regional' league & are both traditional part time teams where they would probably be expected to work the day after a midweek fixture.

Havant & Lowestoft both play in a 'regional' league & are both traditional part time teams where they would probably be expected to work the day after a midweek fixture.
Click to expand...

true, Barrow are full time as are Torquay so they don't have that issue