We’ve got a tough six games coming up, but seemingly we play better against the better teams it looks.

I suppose by getting in those positions we’re doing something right and our luck will turn a bit eventually.

Jones is moaning about the schedule (again). I know the World Cup is coming up in November, but this season doesn’t feel much different than others. We’ve just had a 2 week international break! He is becoming exceedingly whiny recently.
Click to expand...

Didn't you come from a goal down twice?

True - QPR should have had a pen earlier .

BarrieOwl said:
Didn't you come from a goal down twice?
Click to expand...

We’ve got a tough six games coming up, but seemingly we play better against the better teams it looks.

I suppose by getting in those positions we’re doing something right and our luck will turn a bit eventually. Defensively we need to sharpen up, which isn’t surprising when Bradley has been off for personal reasons, Naismith not replaced and Burke constantly pulling his hamstrings.

Jones is moaning about the schedule (again). I know the World Cup is coming up in November, but this season doesn’t feel much different than others. We’ve just had a 2 week international break! He is becoming exceedingly whiny recently.
Click to expand...

You are right he has been even more whiny than usual. Thought his comments about Bell playing for Jamaica in the US against Argentina were also in poor taste given that must have been a huge career highlight for Bell personally going up against Messi. I think hes very frustrated because of what we have both pointed out, we should have more points than we do and therefore lashing out at things due to that frustration.

Defensivley im still not sure why we didnt get another centre half in during the summer given Bradley and Burke have both been relatively injury prone. Its definitely an area we look weak in which is not great given our style is all about doing the basics well, winning one v one battles and being aggressive. Yes we were unlucky Tuesday and should have won the game but in a sense we caused our problems by being weak in a critical area.

Yep, unchanged. Not really expecting anything at Carrow Rd though, too much quality.

Good half from us. Nice header by Riis.

Byram should have been off. Studs on Browne's knee. Ref is a shocker, giving Norwich every 50/50 decision.

Whiteman, McCann, and Brady is looking like a good midfield.

Sargent is very good for them.

Hm....had most of the ball and managed to let in 3 goals.

Bilic already lost 2 out of 3.

I mean really we need a whole new defence.

Any manager will struggle with ours.

Norwich, Millwall and Luton next too

What a win that is.

Alvaro Fernandez another level yet again.

Injuries to Maguire, Brady, and Parrott though.

Pretty poor quality game for us at the hawthorns. Don’t think either side really looked particularly like scoring all afternoon. Potts had our 2 best chances, one was well cleared off the line and then scuffed a volley. Both from set pieces, from open play we didn’t really look like doing much at all.

Thomas Asante was awkward for us and dropped into areas we didn’t want to mark him, which made for an uncomfortable afternoon at times especially for Bradley. He had a couple of decent chances but second half West Brom didnt create much and when Thomas Asante got subbed late on things started getting a bit toxic in the home end.

We've had a sickness bug going around the past few days, McCann was puking up at HT. The performance and energy levels were even more impressive based on that, especially after playing on Wednesday.
Last edited: Oct 8, 2022
S

SMH said:
Worst performance of the season last night against Hull. The Championship in a nutshell really. You think you're finally gaining momentum, then bottom of the form table beats you comfortably.

Since the start of last season we're unbeaten when playing immediately after losing in the league. I think it's lost ten, then won eight and drawn two of our following games. So bodes well for Saturday...
Click to expand...

That'll teach me for posting shite like this and tempting fate.

Did someone leave a rugby post up or forget a tape measure at Wigan ? 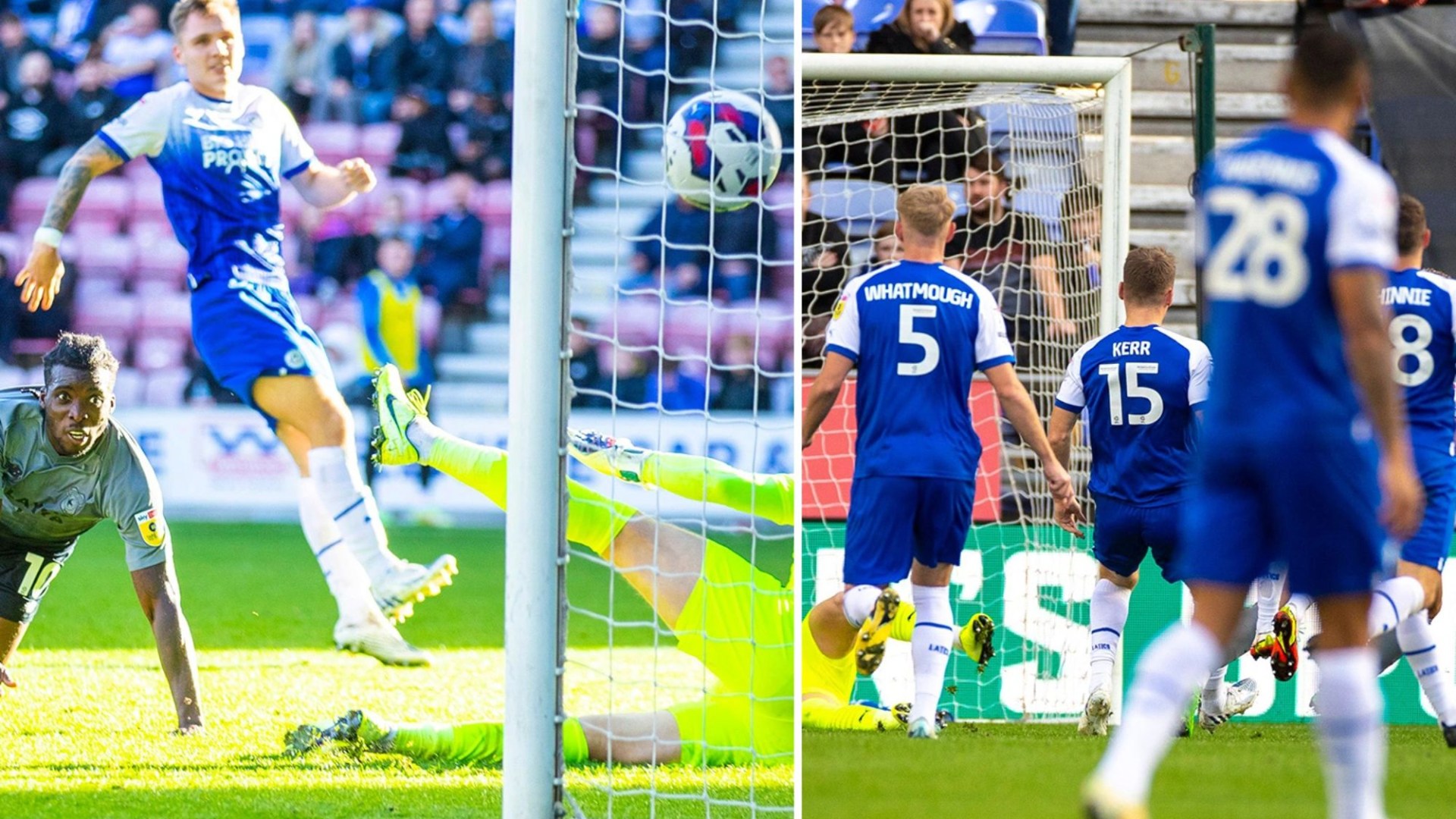 CARDIFF’S 3-1 Championship victory at Wigan faces an FA probe after it was played with one goal BIGGER than the other. Bluebirds caretaker boss Mark Hudson revealed two of his coaching staff spotte…
www.thesun.co.uk

We're one of only two midweek games this week. Bristol City away.

Seems a good time to play them to make it three wins in a row but obviously form means jack shit in this league.

Think Storey is suspended so I would suspect Bambo Diaby would come in on the right of the three. I'd also bring Hughes back into the side for Cunningham who offers much more going forward.

Parrott did his hamstring scoring, Maguire went off at half time after feeling some tightness, and Brady also hobbled off in the second half. Maguire sounds like he could make it but not sure about Brady, if that's the case then i'd guess DJ will be back in.

Absolute filth that second Jerry Yates goal from the weekend.

So was our defensive play generally !

Our captain basically gave up chasing their winger for the 2nd Blackpool goal .

Troy Parrott is going to be out until after the World Cup.

QPR at home for us tomorrow in an early kick off. For reasons I assume associated with the heat death of the universe we are not allowed to beat QPR so despite looking pretty decent overall lately I go in with low expectations to be honest!

QPR looking good of late 3rd in the table and going nicely. Had the makings of that sort of side last year but seems Beale has kicked them up a notch alongside players like Willock who might be one of the leagues stand out players at the moment.

Given our record I’d be quietly happy with a point even if it would be an extension of a rather frustrating lack of wins at home.

That felt good. One down. Now let's sort out the Big One next weekend

Really great performance today. First half Morris and Adebayo were huge handful, won everything into them pretty much and gave us a superb platform to attack from. When they are re like that with the energy we have in midfield it’s a nightmare for teams to play against. Second half they tired a bit after huge shifts but this time NJ got his subs totally right in bringing Jerome, Cornick on at just the right time and they picked up the aggressive press again which eventually got us the second which ultimately won us the game.

Outstanding performance from just about everyone, when we have no midweek game and prepare and recover from the previous weeks we can really go full throttle on the aggressive physical style of game we want to play. QPR despite I think looking quite a good side just couldn’t handle it today

Lose a late lead at Sheffield U but had 9 men for quite a time.

Watford not live on Sky this season: eight games, no wins, four points.

So we will be ok on Wednesday..

But maybe not next Sunday !

Lose a late lead at Sheffield U but had 9 men for quite a time.

Certainly a “game that had everything!” Going from the highlights!

If I were Blackpool fan I’d be annoyed at the second sending off. Such a needless one to have given away, if they have an extra man defending that last minute corner who knows, they might have hung on.

That Fat Centre Half said:
Certainly a “game that had everything!” Going from the highlights!

If I were Blackpool fan I’d be annoyed at the second sending off. Such a needless one to have given away, if they have an extra man defending that last minute corner who knows, they might have hung on.
Click to expand...

Including a punch up afterwards !

Going by the reaction of the Sheff U keeper at the end wonder if something had been said to him ?

Red cards were silly I agree but still seem to be blaming the ref but then don’t we all I guess if things don’t work out as hoped .

Watford not live on Sky this season: eight games, no wins, four points.

So we will be ok on Wednesday..

But maybe not next Sunday !

Such a poor week. Apathy is high right now.

Stoke are the best team we've played this season but it doesn't excuse our inability to offer any sort of threat.

It showed that our defence was just an injury or suspension away from collapse. It's a very poor squad.

Big game tonight to see where we are and what our ambitions and quality are. Sandwiched between two games that mean more, to fans at at least. I wonder how Jones will see it and if theres large rotation or he goes for it and uses the World Cup for a squad regenerative rest.

Hope we are smart with that break and plan it out and use it to its max effectiveness with a balance of family and team togetherness.

Doesnt offer as much as Bree going forward but perhaps thats tactical and instructed, as maybe there isnt room for both our full backs bombing on. When he has got higher hes had better distribution. So keep it up Amari'i. Keep it up.

Yeah feels like this game has snuck up on us (well me at least!). Saturday was such a good performance and Sunday is obviously THE game that many are looking for its felt a bit between basking in the 'glory' of finally beating QPR and playing very well and building up to the Watford game.

All the hallmarks of us getting a bit of a come down to earth i feel as in this league if you arent at it you get punished!

Probably not the case for the players and staff, really in the context of the season its a huge week and real potential for us to make a big leap up into serious conversations at the top of the league which is really remarkable. Real opportunity to measure ourselves against a good side.
You must log in or register to reply here.
Share:
Facebook Twitter Reddit Pinterest Tumblr WhatsApp Email Share Link