Is it wrong with we have just a slight inkling of getting something here? What does that say about Man United and LVG!?
We've grown in confidence hugely in recent weeks, and let's face it what we see of United isn't anything to be afraid of.

That needs to be tempered by the fact we have about 10 first team injuries currently, and that our players in this side we've cobbled together are playing above themselves and running through brick walls (just look at the individual distance ran stats, it's full of our players) and that probably isn't sustainable long term.

However the performance against Chelsea last week was tremendous. Yes Chelsea aren't hitting the heights this season, but Bournemouth going away to the Champions and actively taking the game to them, carving them open first half creating chances, was a sight to behold. A decent defensive job in the second half when needed and some clinical counter attacking showed we have a bit of steel to us as well, something we've lacked all season to date. It follows on the back of gradually improving performances in recent weeks, ever since the half time bollocking and reorganisation that Howe gave the side against Southampton.

Our backup right back Adam Smith seems to have turned into Cafu just recently and made Pedro look like an idiot last week. I'm not a huge fan of full back Francis covering central defence though. I believe United will be missing a few players themselves, particularly in midfield where Harry Arter and Dan Gosling should give anyone a hard game with their relentless pressing.

It might well be that we succumb to a flash of quality somewhere along the line and lose 2-0, but it'll be interesting.

God knows what state our defence will be in for this game - a mixture of midfielders and kids I think.

There's a little bit of confidence floating about before this game that hasn't been felt for a while. We have to be realistic and acknowledge we are still nowhere near favourites for this, but I do feel we have a slight chance against a team low on confidence after Tuesday and missing a number of defenders.

We're still in the midst of our own ludicrous injury crisis, but it's testament to Eddie and the players that this rag-tag group of second string players are starting to look like a cohesive unit. The team spirit at Bournemouth is second to none and there can never be accusations of a lack of effort as with some clubs down the bottom of the table. As I say Eddie Howe has to take full credit for getting this very average group competitive in the Premier League considering most wouldn't have got in our Championship team last year.

Who knows what we're in for tomorrow; play like we did against Chelsea and we won't get blown away. Sticking men behind the ball has never been our way because we simply don't have the personnel to do it; but we showed a resoluteness against Chelsea that was admirable along with our will to attack.

I'll go for 2-1 United but a Cherries performance to be proud of.

AFCB_Mark said:
IOur backup right back Adam Smith seems to have turned into Cafu just recently and made Pedro look like an idiot last week. I'm not a huge fan of full back Francis covering central defence though. I believe United will be missing a few players themselves, particularly in midfield where Harry Arter and Dan Gosling should give anyone a hard game with their relentless pressing.
Click to expand...

I actually think Francis has been our best CB this season. Which says more about the performances of our other centre halves more than anything... but good to see some proper leadership in there and it might need to stay that way until Elphick is ready to return.

Smalling, Darmian, Shaw, Rojo, Jones, Valencia, Rooney and Herrera are all out with injuries and Schweinsteiger is starting a three match suspension.

Fellaini hoofball will be effective. 1-1.

With all those defenders missing for ManU, I do fancy Bournemouth's chances. Thinking about putting money on their win, actually, but that would probably jinx it.

Stevencc said:
Smalling, Darmian, Shaw, Rojo, Jones, Valencia, Rooney and Herrera are all out with injuries and Schweinsteiger is starting a three match suspension.
Click to expand...

And, any negatives going into the match?

With United's lack of defenders and Bournemouth's current form, I'd be very surprised if this was another goalless draw. I'd like to see United bounce back from the midweek hardships, go and put Bournemouth to the sword and have the game finished by half time. Is that going to happen? I'd be surprised if it did.

Can see this the same way the Watford game went. Very close, probably only 1 goal in it. 2-1.

Whitechapel said:
And, any negatives going into the match?
Click to expand... 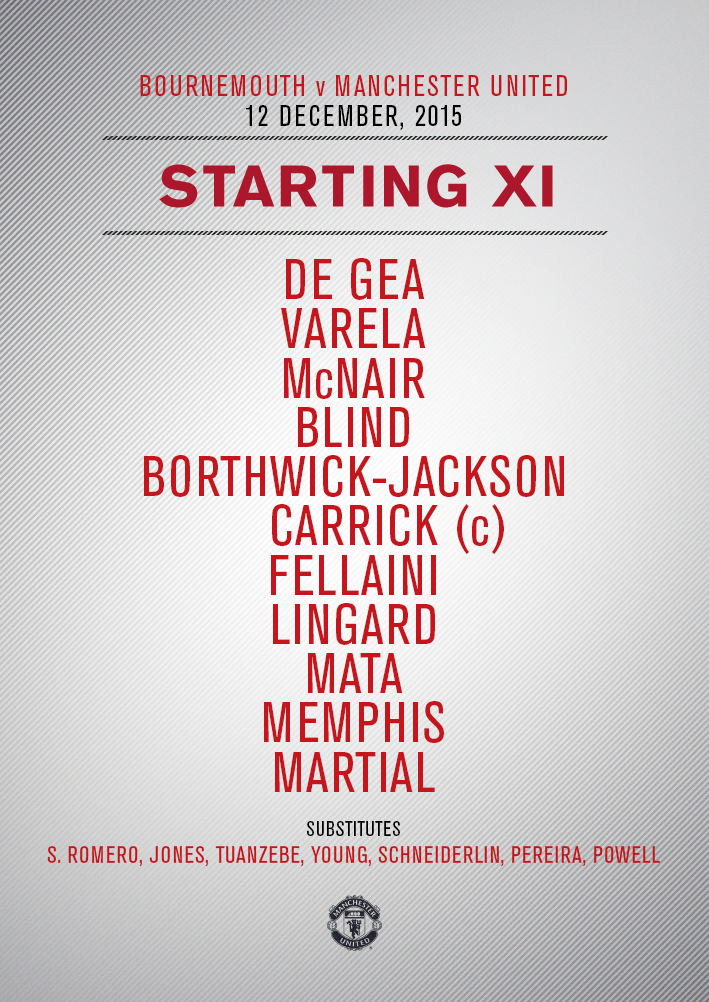 A backline of Varela, McNair, Blind and Borthwick-Jackson.

Why aren't we playing Young. I like Lingard but Young offers more threat currently. Is jones not fully fit? if he is why is he on the bench and not playing?

not liking JT in for Neville on SS. Just not the same calibre of analyst

I was going to watch the Leverkusen Gladbach game because I thought this would be a snoozefest, but with that back line Bournemouth might take the game to Utd and if they do I think both sides will end up having to go balls out.

Pffffft. Come on Bournemouth, keep it up.

And what happened to Lingard?

What a poor game of football, and what a shitty scrappy goal to concede, Afro man bobbling the ball in off his knee whilst falling over. Ours I think was direct from the corner, off the post?

Both sides had their chances so far, but the game is so narrow and congested. We panic on the ball at times, unlike chelsea where confidence flowed. Safe to say united work much harder than chelsea.

Seen the replay now - that's a strange, lucky goal a piece now then.