Brentford vs Blackburn Rovers- The Preview 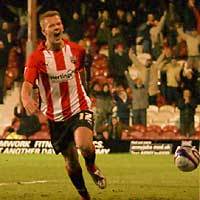 Brentford host Blackburn at Griffin Park at 3pm on December 13th in a match which sees the teams face each other for the first time in the league since 1980 when Blackburn won 3-0 at Ewood Park.

Mark Warburton is likely to keep his team the same as The Bees have no new injury worries. But due to Brentford's previous defeat to Huddersfield, Warburton may change the team around by possibly putting Jota back into the starting 11. Sam Saunders and Nico Yennaris are now fully fit but the duo are likely to be on the bench.

This match sees Jordan Rhodes return to face his former team as the star striker was on loan at Brentford when Brentford won League 2 in the 2008-09 campaign under Andy Scott. Jason Lowe is likely to return for Blackburn. The Rovers defender hasn't played a match since August following a foot injury. Tommy Spurr is likely to be out for Blackburn following an operation earlier this week.