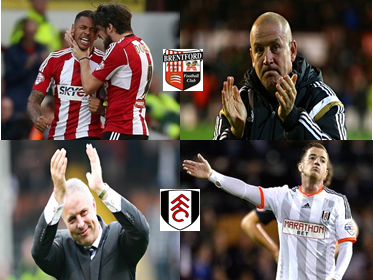 Brentford and Fulham meet in the West London Derby at Griffin Park at 7:45 with the clash live on Sky Sports.

Jonathan Douglas will be available again for Brentford following a suspension in The Bees last match against Millwall following a 5th yellow card of the season for the former Swindon man. Mark Warburton will have an almost full squad with the only absentees being long-term in Alan McCormack and Scott Hogan.

Kit Symons' Fulham have been on a decent run recently; following a 6 match unbeaten run. However, The Cottagers will be without Marcus Bettinelli after the former Accrington loanee had to withdraw from the England Under-21 team therefore back up goalkeeper Gabor Kiraly should return even though the former Bayer Leverkusen man has only appeared twice this season.

Overall, this will be a tight match and a draw would be the likely outcome for this one.