Brentford vs Wolverhampton Wanderers- The Preview 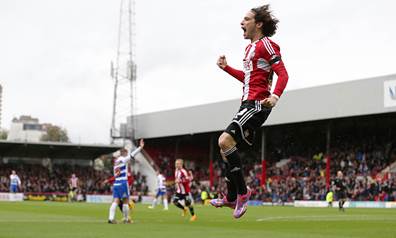 Brentford and Wolverhampton meet at Griffin Park in a match in what Brentford will look to extend their winning run to 5 matches where as Wolverhampton will be looking to end their current run of bad luck against The Bees after losing their last three matches conceding 10 goals in those 3 matches.

Brentford have a full squad as they are only without long-term absentees Alan McCormack and Scott Hogan. Mark Warburton may have selection dilemmas however as Jota impressed when coming off the bench against Fulham; Jota would probably replace Alex Pritchard or Jon Toral if he is to return to the starting line-up.

Wolverhampton are likely to still be without Nouha Dicko who will face a late fitness test ahead of tomorrow's fixture against Brentford. Wolves are also likely to be without Ethan Ebanks-Landell and Scott Golbourne. Ebanks-Landell is out with a Hamstring injury and Golbourne with a foot. Kenny Jacket should give a debut to Jordan Graham after they signed the striker on loan from Aston Villa earlier this week. Also, George Saville will return to Griffin Park for the first time after a loan at The Bees last season.

Overall, Brentford will go into this match as the favourites but Wolverhampton will not go down easily and they will definitely look to end their bad run at Griffin Park.
Last edited: Nov 28, 2014