Sky bet offering 35/1 - Faugheen Champion Hurdle, Sprinter Sacre Champion Chase, Silvniaco Conti Gold Cup I've had a score on that looks like SS is the dodgiest one after losing on his reappearance to Dodging Bullets but it was his first run after a long time off and Barry Geraghty didn't exactly give him a good go at the end I think the run would of done him the world of good and he will certainly improve for Cheltenham.

The first day at Cheltenham could be great for Willie Mullins and Ireland, he trains the favourite in 5 out of 7 races. Un De Sceux looked frighteningly good yesterday when dispatching 2 of his main rivals for the Arkle comfortably and rightly went odds-on, Annie Power should have no problem in the Mares as long as she is fit considering she has not run this season but Quevega was very lightly raced and she won mares 6 times! Douvan looks good for the Supreme but L'ami Serge I am wary of. Faugheen I do fancy strongly but there is a lot of competition in the Champion Hurdle, Hurricane Fly has already beaten last years CH winner Jezki 3 times this season and if Faugheen was not present I would have no issue backing him but as Hurricane Fly and Faugheen are from the same yard Ruby will have pick of the 2 to ride and it looks like he is going to pick Faugheen and he wouldn't pick the horse he thought wouldn't win now would he?

I am very much a Willie Mullins fan and cashed in well last year with Vautour and Faugheen but then went on to lose on Annie Power. I was around £150 up last year going in to the final day ended up totally evens after spreading £50 around and having £100 on Bobs Worth, hopefully this year and I can get up and have a good last day. If Silviniaco Conti comes in for the Gold Cup on the Friday I should be doing well
Last edited by a moderator: Mar 26, 2015
S

Only had two AP bets this year - Peace and Co and Value at Risk in a double and each in singles.

Probably have a few more before the start but not really followed it enough to weigh in yet.
M

Just read an article on Willie Mullins, he has 50 horses going to Cheltenham next week and admits it's a logistical nightmare. One year they ended up taking a horse that wasn't running with them whilst leaving one that was behind.
I'll probably have bets on the horses who are in my "The Jumps" team although some of those will be against each other.

Will pin this shortly. Got a whole raft of offers for Cheltenham next week so I'll post them in here.

Shrimpurh said:
Sky bet offering 35/1 - Faugheen Champion Hurdle, Sprinter Sacre Champion Chase, Silvniaco Conti Gold Cup I've had a score on that looks like SS is the dodgiest one after losing on his reappearance to Dodging Bullets but it was his first run after a long time off and Barry Geraghty didn't exactly give him a good go at the end I think the run would of done him the world of good and he will certainly improve for Cheltenham.
Click to expand...

I reckon SS or Silviniaco Conti will lose, if not both personally. I hope SS wins. The Gold Cup could go to quite a few this year. In fact, a lot of the championship races are wide open for a change.

I think Faugheen will win but I'd love to see The New One do it.

Reckon I'll put a treble on including Vautour, Peace and Co and one other. Probably Douvan. I know he's super short but he looks like a weapon.

William Hill money back as a free bet up to £25 on the first. Will probably stick £25 on Douvan straight away then hopefully all winnings on Annie Power.

Won a bit of money tonight on the roulette so stuck my first Cheltenham bets on.

£25 on Douvan in the first. Money back if it loses.

Will probably put another £30 in my account to work with on Tuesday.

Think I'll open an account with Unibet, 888 and Betway - does anyone have any tips? I'm useless when it comes to horse racing, seems quite a few of you are clued up here..
Last edited: Mar 26, 2015

Everything you've got on Annie Power.

Pretty much what this man says ^^

No real certainties, but Annie Power is as close as you'll get to one.

dont think so mate but still can get a similar price

Ruby Walsh goes with Faugheen, could be decisive?

Paddy Power offering money back on all all loser if Un De Sceaux wins the Arkle that is a bloody good offer.

Betfred with some unbelievable offers for new customers. 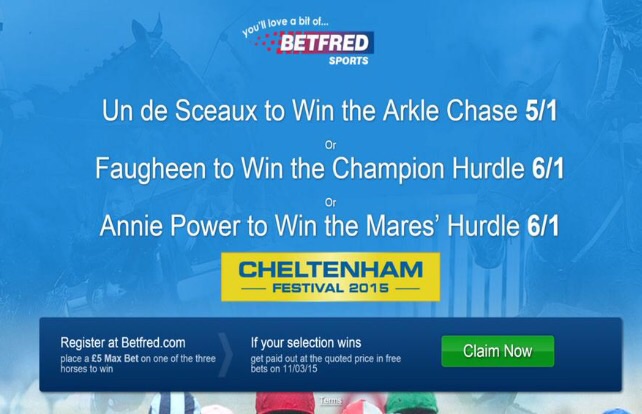 Come on theeeeeen
So tomorrow got to have Douvan, Un De Sceaux, Faugheen and Annie Power in an acca because if it came in and I didn't have it I'd feel sick.
Double: Faugheen, Annie Power
Singles: L'ami Serge; Thomas Crapper; and gonna have Jezki as a saver also

Don't know what to do about Un De Sceaux yet he was my banker but the way Paddy Power are taking him on has got me scared ffs!

Picks for tomorrow. Wednesday even.

No fancies for the Coral Cup or cross country race.
Last edited: Mar 10, 2015

William Hill are going money back as a free bet up to £25 if your horse doesn't win the Supreme Novices' too.

EDIT: I see that has already been mentioned.

If Faugheen ballses up tomorrow I'm going to be in a foul, foul mood

Craig said:
William Hill are going money back as a free bet up to £25 if your horse doesn't win the Supreme Novices' too.

EDIT: I see that has already been mentioned.
Click to expand...

As are Ladbrokes I believe.

Worth a crack? I'll drop the link in here shortly.

Think I've staked enough now. Whatever happens in the first race I think it's all going on Annie Power after that. Let's just hope it's all profit at the end of the day.
M

The main worry with Annie Power is that she hasn't raced for nearly a year, but she should be so much better than the opposition it shouldn't make a difference.

Any good offers that are non-sign up?

Nath said:
Any good offers that are non-sign up?
Click to expand...

Coral will have some, I'll pass them on if I see any.

Annie Power, Faugheen and Un De Sceaux looks a safe treble. Only odds of 4/1 though.

Tempted by Jollyallan ew on the hills offer. What do you reckon?

Will probably do a Mullins multiple and these: