After 40 years of being at the club, I finally reached my objective, I finally achieved my dreams and my ambitions ever since I joined.

When I first joined the club, I chose Temuco because Peru were playing there most games during the Copa America. I decided to give them a try because of that, and it became my best Football Manager save ever. Marcelo Salas gave me a welcome. Temuco were one of the stronger teams in the second tier of Chile. I decided to not buy anyone new and stick with the squad I currently had. It worked out fine and I won the league with 68 points. Winning 20 games, drawn 8 and lost 10. I won the league by one point avoiding playoffs. We were doing really well in the league for most of the season but we were very close to slipping up, dropping a lot of points near the end, Curico Unido was on our trail but we were able to hang on and win the league by one point.

After getting promoted, we had to bring in players in order to stay up, especially how poor our run of form was near the end. We brought in Aussie player Blake Riciutto who played for Uruguayan side, Canadian S.C. We also brought in Carcamo from Cobreloa. These 2 players did very, very well for the club and helped us stay up several years. We finished 11th in our first 2 seasons up. Our third season we finished 9th, but our 4th season we almost went down. We finished in 15th with 35 points, 1 more than O'Higgins in 17th who ended up being relegated.

After that season, we were never in danger again and began challenging for top 5. For the next 6 seasons, we began challenging for top 5 but never actually gone to winning the title. There was unfortunately always one slip up in the Apertura and Clausura that cost us the whole thing. That was during the Huachipato domination era. They were a lot stronger than us at the time and a lot stronger than the rest of the league and won the league many times.

Huachipato had 46 points! It was a crazy time for them however they were no South American powerhouses though.

2024/25 was the first time I qualified for the Copa Libertadores. I qualified to the Preliminary Round via the Opening Stage playoffs, which confuses me because after that, whenever I won the Opening Stage playoffs I qualified for the group stages automatically. Anyways, I had to play Olimpia in Preliminary round, and if you don't know, my ambition was to win this cup. I have never won a Champions League in any continent prior to this in Football Manager. I wanted to win it, but I knew better than anyone that my first time, it wasn't going to happen.

I beat Olimpia 6-1 on aggregate. Beat them 3-0 at home and 3-1 in Asuncion. I was then put in a group with Newells Old Boys, Emelec and Libertad. I didn't know how to feel about that at first, but I managed to go through. Being winless against Newells in the group though pointed to the fact that I was going to go out against any Brazilian or Argentinian side. I got Vitoria in the round of 16 and thought to myself that our run was over. I decided to prepare very carefully anyways. We got a 2-0 win at home and I was surprised. Expecting to get battered in Brazil, I managed to draw 2-2 meaning I reached the quarter finals in my first time ever in the Libertadores. I had Gremio, and we started well at home winning 2-0 but they drew it at 2-2 and won 5-2 in Brazil. It was over then but I was happy with how we did in the Libertadores in my first year and set myself out to win it, but firstly I wanted to win the league as I should take it step by step.

I won my first opening stage in 2027, and I was delighted as we had the quality to win it since 2023, but we weren't the best team at all. We just had the quality and it was frustrating to get to this point. We kept slipping up stupidly but we finally did it in 2027. We won the Apertura.

There was huge drama in the groups though. I needed a draw at home against Independiente to make it out of my group, We had a player sent off in then 87th minute while being 2-1 down. I thought that it was over, another bottled Libertadores campaign. Hernan Diaz showed up and scored at the last minute to see us through to the next round. After that we played against Vasco who had knocked me out in the previous Libertadores in the semi-finals. I managed to beat them 4-1 at home, and lost 4-2 away but it was enough to see me through. I had Riverplate in the quarters, I beat them 3-0 at home, lost 3-2 away seeing me through to the next round. Our opponent was the Chilean Huachipato, who I don't know how they made it that far. We managed to bottle the home leg at 1-1, but then we comfortably beat them 3-1 away from home. In the final we had Corinthians.

I knew it was going to be a seriously tough task, but seeing how good our home form was against other giants, I thought we could put up a fight. I was wrong and the match turned out to be a nightmare. I ended up losing 2-1 at home then I got battered 7-0 in Brazil. I was devastated and thought that with a powerhouse like Corinthians, I would never win the Libertadores. I stopped playing this save for a while.

When I came back to it, I reached the Copa Libertadores final again. In 2049, I had to take on Flamengo. However much like Corinthians, they were really strong at the time. We lost 5-1 at home and the match was over there in the first leg. We managed to win the away leg which had me particularly mad because if we could beat them away, we could have done so much more at home.

Our route to the final was similar to that of 2046. We had Fluminense, who we beat 5-1 at home and lost 4-3 away. I then got Chacarita Juniors who were very strong at the time. I beat them 5-2 at home and lost 4-2 away. I then got Colon Santa Fe who I thought would also be tough but I managed to win both games. 3-0 at home and 4-3 away. You know where this is getting, I had crazy home form. Unfortunately, that wasn't able to live on against Flamengo.

I reached the Libertadores final in 2056 also. In the knockout round, I got Penarol. I won 4-0 in Uruguay and won 2-0 at home. I then got River. I very carefully prepared for the away leg which came first and I managed to get a 2-2 draw. They gave me a scare in the home leg where we drew 0-0 with them almost scoring. Then I got Huachipato once again in the semi finals but it was much easier this time than the last time. In the final, I got Atletico Nacional, who I haven't beaten in 3 attempts and won the Libertadores 2 years prior. I drew the home leg 0-0, and I thought after that, it's over. Away from home I still prepared very carefully. Full time came, I had won 4-0 with 4 Baglio goals. It was my greatest ever achievement on FM, winning the Copa Libertadores with a team who was in the second tier when I first took over. I had won the Sudamericana before that with crazy home form as well, but the Libertadores was what I was REALLY looking out for.

After the Libertadores, I only had 2 trophies left to win. The Club World Cup, and the Recopa Sudamericana. After winning the Copa Sudamericana a few years back, I had participated in the Recopa against Corinthians and I had come very close, but didn't manage to beat them.

In 2056, we participated in the Club World Cup to try and become champions of the world. Something the Libertadores champions have done many times. Especially Corinthians. We had to face Bayern though, which was going to be very tough. Took a look at some of their players and thought that these are much much better than Corinthians. I had the Egyptian side Al Ahly in the semi finals and we managed to beat them 1-0 only. It was a match with very awful shooting but luckily we won and that's all I really wanted.

Now it was time to take on possibly the biggest team in the world, we all felt prepared for it. We take a step on the field in the Stade Olympique du 5 Julliet in Algiers, and began the match against Bayern Munich to see if I could complete a career in Chilean football. 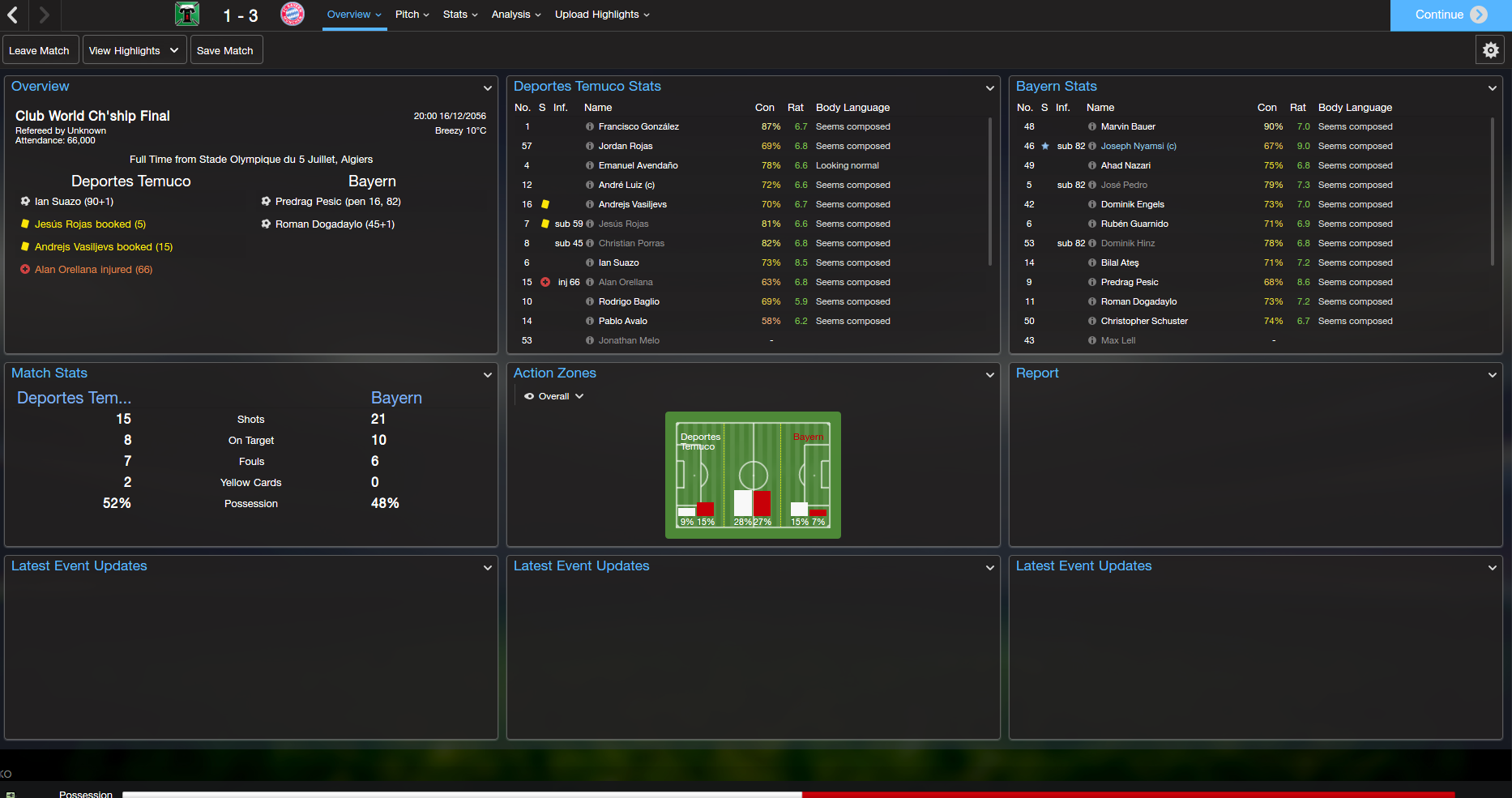 Really good read, and some impressive progress there.

Cheers mate. The progress took longer than I would have liked, but I remained patient throughout. Well aside from the 7-0 loss against Corinthians but aside from that, I kept my confidence.

That is insane, how long did that save take you to do 40 years?

Been playing the save since mid spring, so around April. Like I said I had a bit of a break after losing 7-0 to Corinthians and came back to it recently. Mind, I play FM very fast and winning the Libertadores took a little longer than I would have liked, but it was difficult because Corinthians were so powerful in the future. I eventually pulled through and did it! Shame I lost to Bayern.
You must log in or register to reply here.
Share:
Facebook Twitter Reddit Pinterest Tumblr WhatsApp Email Share Link