In one of the closest title races in TPLG history, Super_horns holds off his competitors to become the 2015–16 Champion. An impressive debut season started off in average fashion but his consistency soon saw him rise. Spending only two weeks outside of the top ten (12th in Weeks 2 & 3), it took him half a season to break into the top three and even then, he struggled to stay there - occupying fourth for five weeks out of next six. Top-scoring in Week 26, he climbed up to second for the first time and four weeks later he moved up to first, where he'd remain for the rest of the season.
Total Points: 1,047
Average: 27.55
Success Rate: .557
High Score: 54 (Week 26)
Low Score: 6 (Week 31)
Weekly High Scores: 54 (Week 26)
Weekly Low Scores: none
Highest & Lowest Positions: 1st (9 weeks), 12th (2 weeks)
Most Occupied Position: 1st (9 weeks)

One of the longer-serving TPLGers, an ever-present since joining in 2009–10, Leewilson finishes on the podium for a record fourth time. While the title has proven elusive (one 2nd & three 3rd place finishes), that's more than three-time champion liu and three-time runner-up The One. It was a slow start for last year's runner-up, flirting with the top three but struggling to establish himself there until the last quarter of the season. Briefly dropping to fourth, he then spent last few weeks tussling with Murphy and Markface for second before eventually losing out to the former.
Total Points: 1,013
Average: 26.66
Success Rate: .526
High Score: 60 (Week 12)
Low Score: 0 (Week 31)
Weekly High Scores: 60 (Week 12), 36 (Week 28), 40 (Week 35)
Weekly Low Scores: 0 (Week 31)
Highest & Lowest Position: 2nd (2 weeks), 38th (1 week)
Most Occupied Position: 3rd (8 weeks) 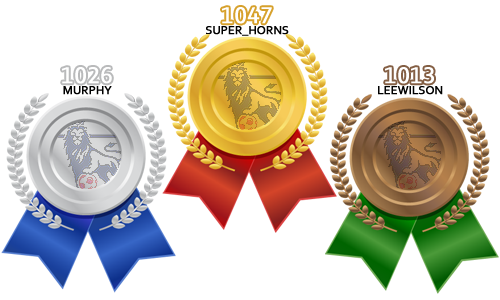 Having spent the last five weeks alternating between second and third, Markface just falls short of a podium finish while DontBringBertie narrowly edges out Nilsson for a top five finish.

It's been a disappointing end to the season for Blitzballer who finishes 8th having spent more weeks in the top three (23) than everybody but Murphy (31). He's in good company though with last year's champion and veteran Veggie Legs, last year's third-place runner-up and two-time cup finalist JustinQPR and another of the longest-serving TPLGers danbylfc also making up the top ten. Smat just misses out, a couple of no-shows proving decisive.

Elsewhere, despite their bottom half positions seashell and Stevencc end the season with the fourth and seventh best success rates respectively. For the second season running, JustinQPR's success rate is second to none. Smudge and I just finish outside the bottom three – her four 0 point hauls matched by no-one while my pitiful 19.58 average was bettered by everyone. No surprises in the bottom three; gunnerson started 8 weeks in, Sideshow Bob missed ten weeks (8 in the second half of the season) and the week's lowest scorer epic73 joined in week 17. 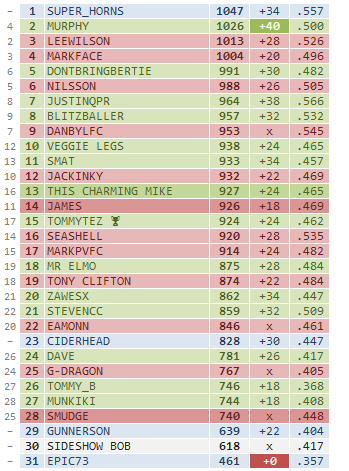 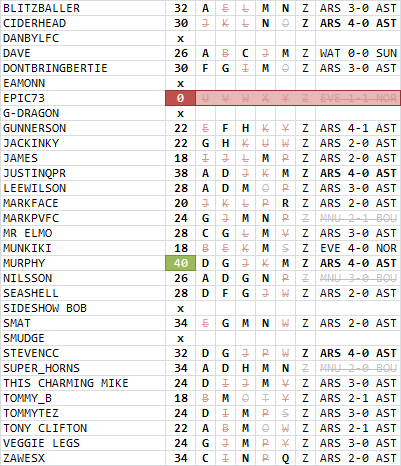 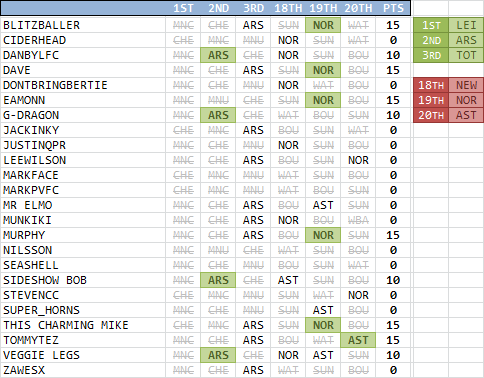 Really hope you reconsider after a break and come back to run this again in August as its a very enjoyable feature.

Congratulations to Super Horns as well. Didn't bottle it at all and made very solid picks all the way through. Also well done to Murph (gritted teeth)

And of course I bottled it on the last week. That's another season outside of the top 3.

Thanks again Munks for running this, definitely my favourite feature on the site considering you run it so well. Can understand why you're giving it a miss next season as I can imagine it'd take a lot of time, but I'm a greedy bastard and hope you decide to give it a go again.

epic73 said:
EDIT: Just realized that I have 110 points possible but I'm probably going to get 0.
Click to expand...

What did I tell you?

Anyway, Munkiki, thanks so much for running this, sad to see you go. Come back soon!

Also, would anyone be interested in co-running this next season?

Terrific season Munks, and chuffed to take 2nd ahead of Wilson, especially after my late wobble!

Been a brilliant game ever since I joined TFF all those years ago, hope someone continues the great legacy you've left!

Thanks Munkiki! This really is a brilliant game and great fun, even if I'm useless at it!

Thanks for all your efforts Munkiki. Great game.

Now have the Euros off and come back in August please.

Well done Super_horns, I guess I have to hand over my crown now.

Thanks as ever for running this Munkiki, as others have said it would be great to see it back at some point in the future.

7th season of doing this I'm sincerely hoping there will be an 8th I need to better my top 7 finish which I should of done this year!!