Tried this before a few months back, but we all agreed to do separate saves and keep each other updated, due to the fear of us not being online at the same time.

But, I have recently done an Online Game with many of my friends, and we established that not everybody needs to be Online at the same time to play, so we could have like a limit like - 3/4 of the people have to be online for us to play.

Count me in.
T

What happens if the game is continued whilst somebody doesn't play- are they basically in 'holiday mode' and assistant takes control of matches?

What sort of times would we normally be playing?

TractorBoys said:
What happens if the game is continued whilst somebody doesn't play- are they basically in 'holiday mode' and assistant takes control of matches?

What sort of times would we normally be playing?

Indeed it does - and you still get all the inboxes and such, you just have to read them when you next come onto the game.

Do we all play in the same league or wut?

TractorBoys said:
Go on then, I'm in.

Do we all play in the same league or wut?

Will PM you for Steam details later

I'm up for doing this again if you want, JJH.

JoeJoeJoeJoe said:
I'm tied up in 2020 as Cov manager. I've just led them to 6th in the prem and an FA Cup semi-final. I can't leave them now I'm afraid.
Click to expand...

Yeah am up for this.

Awesome, got a good turnout already.

Will PM you all later with Steam details and such.
T

How would it work?

I don't have the greatest amount of time, but could possibly join in.

Will PM you mate.

Starting this tonight - so if there are any last minute signups please do PM me.

Will create a post on how all is going after every session we play.

I'd be up for joining this, how's it going to work JJH?

Started this last night - all 11 participants were able to make it for certain periods of time, and it ran for about 7 hours from 8pm-3am

First up came choosing teams - we did Championship teams, and the only rule was you weren't aloud to pick the club you support, so for example, TB would not have been allowed to choose Ipswich.

We managed to get through a tedious, and very stop start pre-season which seemed to take a while. I, as Brighton manager dedicated nearly 3 hours of my life to signing one Yaser Kasim, whereas others like BCFC Jordan spent time signing Nahki Wells, whereas RKP made some fantastic loan deals, including both Jordan Ibe and Jack Grealish. The most shocking release was probably TractorBoys letting Bakary Sako go at Wolves, but the fact he was replaced by JET makes up for it! Some of us had bigger budgets than others, and I, who is not one to splash the cash on FM, spent nearly £2m of my budget signing Yaser Kasim (800k up front fee) as that position was desperately needed. We made our signings, and then holidayed through the last 2 weeks or so of Pre-Season, to get through it quicker, otherwise we'd probably still be there now!

Around came the first day of the season on the 8th August, where only Madejski's Blackburn played, and were humiliated in front of all the other 10 of us at Home, in a 0-1 defeat to Cardiff (admittedly the goal was half a mile offside, and the red card he received was probably a harsh one

) also, not to mention that his game froze at 60 minutes, so his assistant took control of the final 30.

Then came the first bulk of fixtures on the 9th August. Brentford (City169) came up against Mr Elmo's Charlton, and injury ridden Ipswich (BCFC Jordan) came up against RKP's impressive and money based Fulham. I found my Brighton side coming up against Sheff Wed at Home - whereas JoeJoeJoeJoe's Bolton side probably faced the sternest test Away at Watford. Other fixtures we were involved in consisted of MagpieBee's Derby vs Rortherham, Full of Gas's Middlesborough coming up against Birmingham, and Richard Cranium's Nottingham Forest vs Blackpool.

We seen a range of results, wins, draws and losses, and some notable hat-tricks, including my own Sammy Baldock, and Full of Gas's Kike. Here's how it turned out: 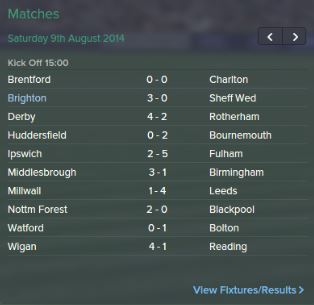 Next came Sunday the 10th of August, where TractorBoys would be coming up against relegated Norwich in his opening day clash. His Wolves side scraped through 9 men Norwich, with Dicko providing the goods at the business end of the pitch.

The few of us that were left standing at ridiculous AM in the morning then ventured into the next round of fixtures, which were the Capital One Cup. Instead of posting screenshots, because there were so many games - I can give the results. They were as followed:

And then our only two losses...

We're going again tonight, and should really make some progress with the season now being started!

If you're still reading - fair play to you

I definitely need to get a striker or two, don't think 2 will do the job for the season

You'll learn in time that i'm something of a 1-0 expert on FM. Practically every game I play I either win or lose 1-0.
T

JJH, gotta give it to you mate. Cracking write up. Disappointing to lose out in the cup on penalties but I'll get over it.

Hopefully the assistant sees me right brought the weekend

City169 said:
I definitely need to get a striker or two, don't think 2 will do the job for the season
Click to expand...

2 strikers is quite low! I got in Stokes to supplement my front line. Martin, Bent, Stokes, Russell and Dawkins, should do!

MagpieBee said:
2 strikers is quite low! I got in Stokes to supplement my front line. Martin, Bent, Stokes, Russell and Dawkins, should do!
Click to expand...

I got someone in mind, just not sure how he will do at championship level

MagpieBee said:
2 strikers is quite low! I got in Stokes to supplement my front line. Martin, Bent, Stokes, Russell and Dawkins, should do!
Click to expand...

You don't need anyone else when you have one Sammy Baldock!...

Until he gets injured.

Shit, annoyed that I missed out on this.

Saddlerrad said:
Shit, annoyed that I missed out on this.
Click to expand...

You could probably still join if you wanted, Saddler. You'd have missed the summer transfer window and the first 8/9 games, but a few have missed those games anyway as we've only played two nights - the first night was mainly trudging through the summer loading screens and the second was more focused on actual games. Teams like Bournemouth are still available.

The option is open if you want to consider it and you'll be able to apply for the Ipswich vacancy soon...
T