Even relegation threatened Bradford and Shrewsbury had a bigger wage budget than Villa. There is only one place they're going I think. 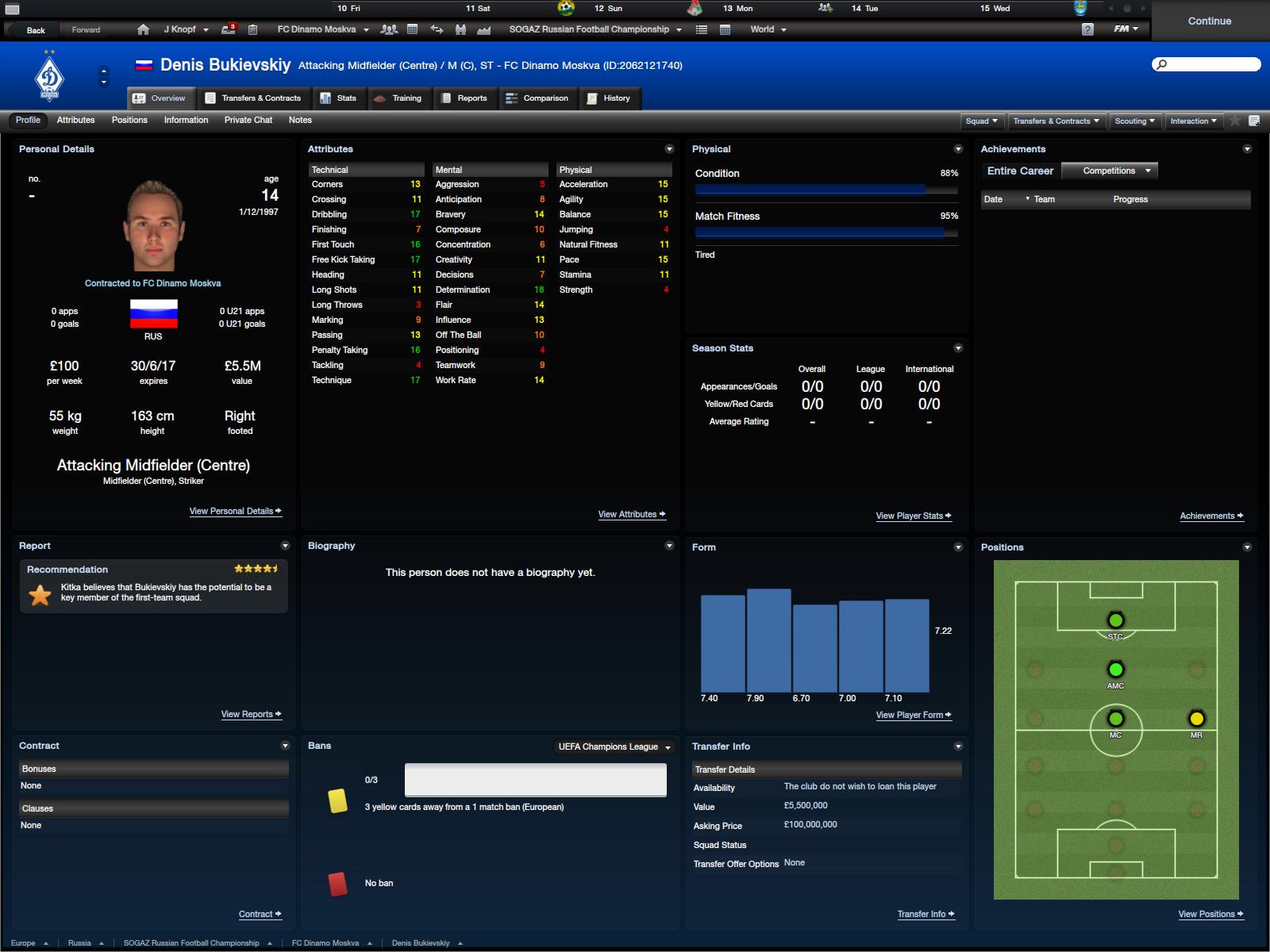 Recently began a Bolton Wanderers Career, heres the first episode (if this is in the wrong place, please feel free to move/delete it mods)

Went back to a save from ages ago. Had Grimsby in the Prem where I'd previously won it. New season, finished 6th with a low budget and was promptly sacked. Took over Walsall who were expected to be relegated. Got them to 3rd in December and was offered the Fiorentina job, who were 12th in Serie A. Guided them to a 7th place finish. New season and currently 2nd. Players want away to bigger clubs so Im considering quitting but I need some stability again.

Got another episode of my FM 16 Bolton Wanderers playthrough, Wakey-Wakey Wanderers for anyone thats interested.

In the first episode we took a look at the club as a whole and looked into the squad and the clubs financial situation, in this episode we run through the results from preseason and pick things up in the league against Rochdale in a North-West derby!

I'll give it a watch, think I'm already subbed to you.

epic73 said:
I'll give it a watch, think I'm already subbed to you.
Click to expand...

Have decided rather than clog this thread up with updates etc. I've made a thread to keep it all in there http://onefootballforum.co.uk/index...rers-bolton-fm16-career-youtube-series.11570/

I've knocked the Wolfsburg save on the head, left it too long and forgot what I was doing.

Giving Sevilla a go now.
A

Finally bought 16 this week. As always I'm a former international superstar and began the game unemployed. The Derby job came up in early October, I applied and had an interview but the pricks cut off talks after I asked for a salary befitting my skill. A week later Forest sacked their manager so I went there instead and my first game was at home to Derby, smashed em 5-1. Gave the V's to the Derby board. I won my next game 3-0 but then went on a poor run of losing 3 games straight. Tweaked my formation to 4-1-2-2-1 and got things ticking. Mancienne & Big Kev Wilson allow me to play a very high line, pure pace. I didn't realise I was transfer embargoed so that was a bit shit, had to bring through the youngsters instead. Out of absolutely f'king nowhere we scraped 6th on the last day (we were lower mid-table for most of the season but went on a mammoth run) We then beat Sheff Weds in the semi's and cruised the final 3-0 against Brighton. Unexpected promotion, perhaps the greatest promotion of all times.

My squad is a bit unprepared for the PL. Darron Gibson & Wellington Silva were my big signings of the summer, both on a free. Signed the on-loan boys on a permanent basis but Gibson & Wellington are the only new additions so the squad is still a bit gash but I've got no money left so it's all about the youngsters. First game was a 3-1 loss to Arsenal but we had a tremendous 1-0 win against Everton in the next. It's gonna be tough but my boys can beat anyone on their day.

First transfer window business done. My head of youth development brought in Fede while I signed Sansone, Tagliafico and Ascacibar.

I'm expected to qualify for the next season's Champions League and reach the first knockout rounds of the same competition this time around.

A 14 year old that good is unreal!

Luke Imp said:
Started with AFC Wimbledon. Going to be a career game, so I'll probably end up moving Clubs every 3 years or so when I've got them out of L1.

Mid-table in January, which is where the Board want me. Terrible squad, but I've added 5 loan players to it to give me a bit of quality. £10k under budget and I'll just save that until the summer where just about every player is out of contract and at the minute both my LB's have broke their legs and 4 of my 5 strikers are out injured, so happy days.

Will get a better gauge of how I'm going to do next season when I can re-build the squad.
Click to expand...

The answer to the final point was not very well, so I started again. Again.

Won the league the second season. Motored in the final 15 games, going from 10th to 1st, overtaking a Bury side who, at one stage, were 15 points in front of me.

Currently in my 3rd season with Nottingham Forest. Guided them to the Championship title first season with an embargo. Seriously active in the transfer market for the first season for the prem (Keep Nelson Oliveria by all means) then managed to get 5th and a Europa league spot. Could have got top 4 but kept bottling all my last games!

With York City, went up to the Championship after two seasons in each division. In the FM variant I play, top 3 get promotion to PL, finished 4th twice in a row, currently in 1st in seventh season.

Thats a cracking achievement, but one that also depresses me slightly.

Since February I've been managing Benfica too, with the aim of winning the CL without making any signings. I took charge of the U19's aswell for this, ensuring the better players got game time etc.

I've won 10 trophies in 3 and a half seasons, but the CL has eluded us (lost in the final to Madrid last time out), and the squad has been weakened a bit after losing two players on deadline day.

Do you have any original players left in your first team?

yellow said:
Thats a cracking achievement, but one that also depresses me slightly.

Since February I've been managing Benfica too, with the aim of winning the CL without making any signings. I took charge of the U19's aswell for this, ensuring the better players got game time etc.

I've won 10 trophies in 3 and a half seasons, but the CL has eluded us (lost in the final to Madrid last time out), and the squad has been weakened a bit after losing two players on deadline day.

Do you have any original players left in your first team?
Click to expand...

Yeah, I've got a few of my original players still. Nelson Semedo, Nico Gaitan, Goncalo Guedes, Ivan Saponjic, Luka Jovic, Helder, Ruben Dias (develops in to a great CB with game time as I'm sure you're aware), Alex Grimaldo, Ze Gomes and Andre Carillo (if you count him).

I've made some good money on some of the original players, like Talisca and Andre Almeida, but selling Renato Sanches to Man City in 2017 for £94mil including add ons (with an £80mil buy back clause

) was what really allowed me to kick on and invest, and resulted in the first CL win after 2 QF exits.

I've brought in some good first team players over the years, Bernardo Silva and Alessio Romagnoli being the most important, but I'm generally buying young players from Portugal, Brazil, and mostly Argentina, molding them for certain roles to fit my first teams system in the under 19's, then either letting other clubs develop them further with loan moves once they're too good for the under 19's or putting them in the first team. The B team doesn't seem very helpful and players tend to stagnate rather than improve there imo. Currently have 59 players out on loan for the 2019/20 season.

I'd be really impressed if you won the CL without making any signings. I haven't had many decent regens thus far. 1 or 2 who'd make decent squad players but nothing beyond that aside from this fella I just aquired....

Chucked him straight in the first team squad to be used in the cups and against weaker league opposition. Also made him available for the under 19's. He got injured in his first senior game though

Fair does. My save is on the old patch so I didn't have some of those players. However, Nelson Semedo was an absolute machine for me, averaging 8.5 over whole seasons! Gaitan was also too good for the domestic tournaments, regularly dominating teams. Ze Gomes was my main striker too, he hit 35 in his first full season in the first team and had 40 by mid February second time out.

I had some big sales too, although none as big as that!

Tallish would also have gone but I rejected a £32m bid for him at the end of the first season as he smashed it for me (yet unfortunately missed a penalty in the CL Final!!). Kinda got a bit bored of it now, the temptation to splash the £250m transfer budget is huge!

Never had that before, was ready to throw the PC when Lambert made it 4-2...

Are FM not allowed to use the actual team badges or something?

They don't have the licenses for the Premier League badges, you can download badge packs, but I'm really not fussed, so I don't bother.

And we beat them 2-1 at Villa Park (from behind again) to go through to the final 6-5 on aggregate. We face Chelsea in the final.

JaseTheVillain said:
And we beat them 2-1 at Villa Park (from behind again) to go through to the final 6-5 on aggregate. We face Chelsea in the final.
Click to expand...

You should start a thread. I'm sure Aaron-Bcfc and Look Out There Are Llamas and MJA and BetterCallSaul would be glad to help.

epic73 said:
You should start a thread. I'm sure Aaron-Bcfc and Look Out There Are Llamas and MJA and BetterCallSaul would be glad to help.
Click to expand...

No. I'll play it my own way ta. Even though I barely have any players left due to still being under the tyrannical rule of Randy Lerner, the yank bastard.

Going to replicate my Temuco save. Started with Liga de Loja in the second tier of Ecuador.

Never go back, it's never as fun.

JaseTheVillain said:
Never go back, it's never as fun.
Click to expand...

I can see why you would say that but I've already tried replicating the Temuco save earlier this year with Sportivo Trinidense. I really enjoyed it but I didn't succeed because I spent too much tycoon money so I went in admin.

And yes, you read that right, I had a tycoon in the second division of Paraguay.

Just bought the handheld version for £2. Considering trying to turn Ajax into European giants again.
You must log in or register to reply here.