On Saturday Cardiff city travel to Craven Cottage for a succulent Championship clash, Cardiff come in to the fixture with good form after winning 2 of they're opening 4 fixtures, Fulham on the other hand sit rock bottom of the Sky bet championship with zero points, in some ways it could be seen as a must win for the Cottagers and under pressure manager Felix Magath!

Cardiff city come in to the game with an almost entirely fit squad to pick from, as new boy Kiko Macheda fired 2 goals on his debut in Tuesday night's cup clash at Vale Park, but long term injured Craig Noone still watches from the sidelines. This could potentially weaken Cardiff's right flank as he proved to be the stand out player last season scoring and creating goals against a wide array of opponents.

Fulham come in to the game with a full squad but they will be without 12m striker Kostas Mitroglou, you could argue this won't have much of an effect as transfer record signing Ross McCormack fired his first goal for the whites on Tuesday night against newly promoted Brentford at Griffin Park.

From a personal viewpoint Cardiff could make a few changes; Macheda to start up top for Adam le fondre, and John Brayford coming back in as he was missed against Wolves. Fulham on the otherhand are likely to be downbeat after taking a 5-1 thrashing at the hands of Derby last week. Felix Magath will be under pressure to get the side back to some sort of form, but I can't see this being anything but a comfortable away win.

Fulham will lose again I feel, they really are on a downward spiral so I predict an easy win for Cardiff here!

TomWolvesFC said:
Fulham will lose again I feel, they really are on a downward spiral so I predict an easy win for Cardiff here!
Click to expand...

Yep Fulham really are in trouble

Derby played Fulham last weekend. They have a few youngsters playing but they're a really poor side IMO. Ross McCormack finally found his shooting boots in the Cup v Brentford, but if last Saturday's performance is anything to go by, they'll struggle this season. I would predict a Cardiff win.

Fulham are in deep trouble atm and i dont see that changing. Lose and Megath will be gone. Changes need making at the club or relegation will on the mind even though we are only 4/5 games into the season. Fulham 1-3 Cardiff

3-1 Cardiff for me change of manager needed for Fulham.

Cardiff City will be the next opponent at the Cottage to face bottom of the table Fulham. Both Fulham and Cardiff City have played 4 games each so far this season and i think its fair to say both have had very different starts to the season. Fulham have lost all 4 games including a heavy 5-1 defeat to Derby last time out. Fulham have also lost away to Ipswich and at home to Millwall and Wolves. Fulham sit in 24th with 0 points and a -7 Goal difference.

On the other hand Cardiff City have made a steady start back in the Championship under inexperienced boss Ole Gunnar Solskjaer with 7 points from a possible 12, its a pretty average start from Cardiff's point of view with wins coming at home to Huddersfield and Wigan and a point coming on the opening day away at Blackburn. Cardiff's unbeaten run came to and end at Wolves last weekend after Mark Hudson's 94th minute own goal giving the Wolves all the points.
Cardiff sit in 8th position, comparatively they've made a much better start than their opponents on Saturday and both the sides that were relegated from the Premier League alongside them.

Cardiff dont have any new injuries to report with Craig Noone and Ben Turner both still out with lengthy injuries. Noone really adds something to Cardiff when he features, with exciting runs down the left flank which excite the Cardiff fans and he often provides assist after assist down the left flank. Pilkington arrived at the club last week and has already featured twice in Noone's place, impressing early on.

Fulham also have no new injury concerns. The recent poor fitness of McCormack seems to have been left behind as he looks set to start against his former club on Saturday. McCormack spent 3 seasons at City scoring many goals. Fulham have today signed, former Palace keeper Gabor Kiraly but it may be too late for him to feature against the Bluebirds.

Cardiff are set to keep the usual 4-4-2 with Jones and ALF leading the line, although Ole may change to a 4-3-3 adding that extra attacking incentive up front with options of Macheda, Guerra or Maynard. Cardiff's probable starting XI may look like this - Marshall, Fabio, Morrison, Connolly, Brayford, Whittingham, Burgstaller, Adeyemi, Daehli, Le Fondre and Jones.

Cardiff never do it the easy way but im going for Fulham 1-3 Cardiff City. Cardiff to win comfortably with former Bluebird ,McCormack scoring and Jones to grab 2 with Whittingham getting in on the act.

Cardiff City head to West London in what last year would have been a Premiership relegation battle. The Bluebirds have started the new Championship campaign in a strong manner, picking up 7 points out of a possible 12. Fulham on the other hand couldn't have asked for a worse start, losing all 4 of their opening fixtures. Last season Cardiff did the double over Fulham, with a 91st minute goal from Jordon Mutch giving the Bluebirdsa 2-1 victory at Craven Cottage, before a Steven Caulker brace ensured the home side picked up another 3 points in a match that ended 3-1.

The Bluebirds do have a few injury problems, Craig Noone being the most significant absentee, still struggling for fitness after a long spell on the sideline. In addition to Noone, Cardiff will also be without Aron Gunnarson and Ben Turner who are both currently nursing their wounds. Fulham on the other hand seem to have a full strength squad to throw at Cardiff in the hope of grabbing their first Championship points. And with new 38 year old Hungarian keeper Gabor Kiraly now in their ranks, they are only getting stronger.

Under Ole Gunnar Solskjaer, Cardiff are yet to pick the same team for 2 consecutive games, which makes my task of having a guess of the line up, quite a bit harder. I'd imagine that this is a realistic attempt of the away team's line up, and although Ole has announced that Kiko Macheda will play a part in this game, it's unlikely that he will start.
Fulham are a bit easier to judge, with £12 million pound summer signing Ross McCormack ready to attack his old employers, you would imagine he will be in line to lead the line ahead of Hugo Rodallega. I'm going to go for a 2-1 win for Cardiff in this one, I feel as if they have to much quality throughout the team to grab a victory. 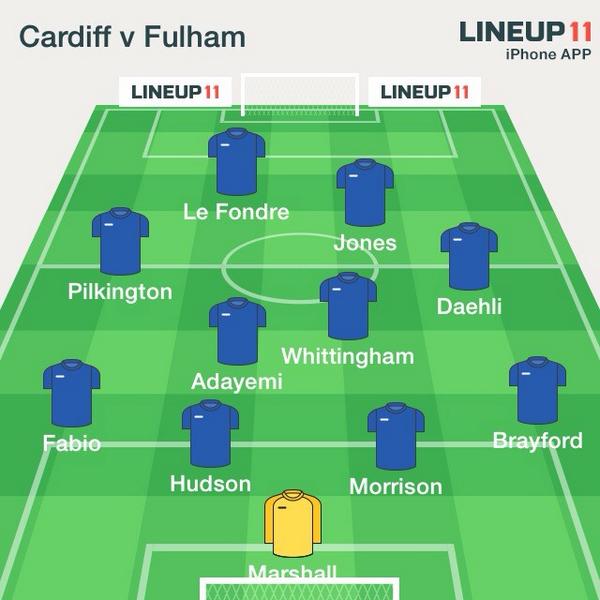 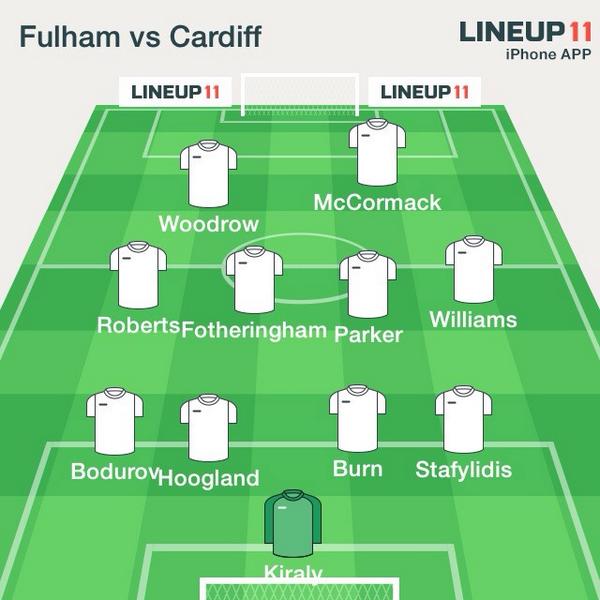