I would laugh if he ends up at Peterborough. That will end in tears.

HertsCobbler said:
I would laugh if he ends up at Peterborough. That will end in tears.
Click to expand...

It will end in tears wherever he goes, can't stand the prick!

Rumours abound of P'B*ro being his destination. The phrase ''match made in heaven'' springs to mind.

However, it would probably work which is the sad part.

Why would any club with League One promotion ambitions employ him after the debacle at Preston? He's done well at Stevenage but even there the fans started to turn before Christmas. Any other club and there is basically huge pressure for instant results because no-one else will put up with his anti-football for long unless they are winning every week.
M

A bit like Evans when he was at Crawley, why do people get worked up over these teams managers? Who gives a fuck about Crawley and Stevenage.

Haha Peterborough is the perfect place for that wanker. Inbred tossers

Anywhere but this league.

I wonder what's going on at Stevenage - he said in the interview "things at the club are going to change I think" and that he needed to make sure he could pay the bills. Wage bill being cut?

graham Westley has abused his privilege
and gave football style a miss at preston and Stevenage.
his preference for the long ball game and dodgy tactics
have made him a pariah in the minds of pure football fanatics .
if as speculated he goes to the posh
then they deserve to be served up the same old tosh.
he may well be astute and some say knowledgeable
but I prefer my teams style of playing unlike his hoof-ball!!

daviejones said:
Anywhere but this league.

I wonder what's going on at Stevenage - he said in the interview "things at the club are going to change I think" and that he needed to make sure he could pay the bills. Wage bill being cut?
Click to expand...

Having just read the article Westley is suggesting that Phil Wallace is looking for new investment and isn't willing to give Westley a new deal as a result. I've been told one of the potential money men is very much in the Westley out camp so to speak, so doesn't look too promising from his point of view.

I genuinely don't think Westley wants to leave and in contrast to the general feeling last December most of the fan base would like him to stay. If he were to stay I think we'd be there or thereabouts again next season, the squad has visibly improved as the season progressed and there's a good platform for him, or someone else, to work from.

On Friday when I was told about Westley more than likely leaving I was concerned about the board's ability to appoint a replacement, and that's still a worry, having read this, I'm now more concerned what the future holds moving forward without Phil Wallace!

An interesting summer ahead of us anyway.

Don't be suprised if he is the new manager at our gaff next week, one or two people in the know seem to think our appointment will raise a few eyebrows and our players have all been going a bit mental on twitter, plus we will only have 12 players in contract - albeit alot of them decent players.

Graham likes building teams from scratch with his own players as well, plus he will get a much bigger budget with our owners..........

You won't need a big budget to build a Westley type team. His style is 10x worse than Paul Cox ever was, At least he knows how to get points with his though.

I've been told he's looking for work, according to the article in the FLP Wallace has even made another club aware of Westley's availability! The Peterborough job was mentioned on Friday, obviously with the Orient and Crawley jobs available it wouldn't be much of a surprise if he ended up in either of those positions.

SSN have reported we've made an approach to West Ham in regards to Teddy Sheringham for the manager's job.

... I'd say that's pretty much concrete proof Westley will be moving on then.

Not sure what to think about it really, he's managed to stabilise us again in League 2 and left us with a very good core of players to build with next season so for that I'm grateful, still a little surprised he has moved on though. (Although from what I hear, it's more of a decision at the board level than GW actually deciding it's time to move on)

Be a very different culture then if Sheringham comes in!

Assuming there's truth to it, I can't understand the logic behind letting Westley leave to appoint Teddy Sheringham. Would have absolutely no idea what to expect if he did come in.

Well there goes some of the fun for next season.
H

Roly said:
Well there goes some of the fun for next season.
Click to expand...

Sheringham will go one of two ways - very well - or like you did when you had Tony Cottee. My Barnet supporting mate literally turns very red when I say Tony Co...

Seems a bit odd this one, Westley might be a numpty but not sure replacing him with someone with such little experience is ideal.

Where ever Teddy Sheringham goes, Darren Anderton isn't far behind with a crate of champagne and a gaggle of girls.

I'm sure they'd all love Stevenage....

Have to admit that was one of my first thoughts! Suppose it'd be no different to Westley taking Chris Beardsley with him from job to job.

From what I've been told Sheringham was at the club yesterday, the board have also identified another target they'd like to talk with apparently, we don't stand a chance of securing the other target so Sheringham is looking likely, providing he's actually interested.

It's a gamble, Westley knows how to make you competitive in this league on a shoestring budget, and knows the non league market well. As well as that he seems to have players that fit his certain way of playing, I can't imagine Sheringham wanting to play that same way, it's either going to work well or be an absolute disaster.

Sky Sports are reporting Sheringham has agreed terms and will be appointed our new manager tomorrow.

Brox said:
Sky Sports are reporting Sheringham has agreed terms and will be appointed our new manager tomorrow.
Click to expand...

Hope we play you early.

This just reminds me of Barnes at Tranmere.

They appoint an ex Liverpool legend in order to try and tempt pool fans to go watch them and here is an ex Tottenham legend to do the same. 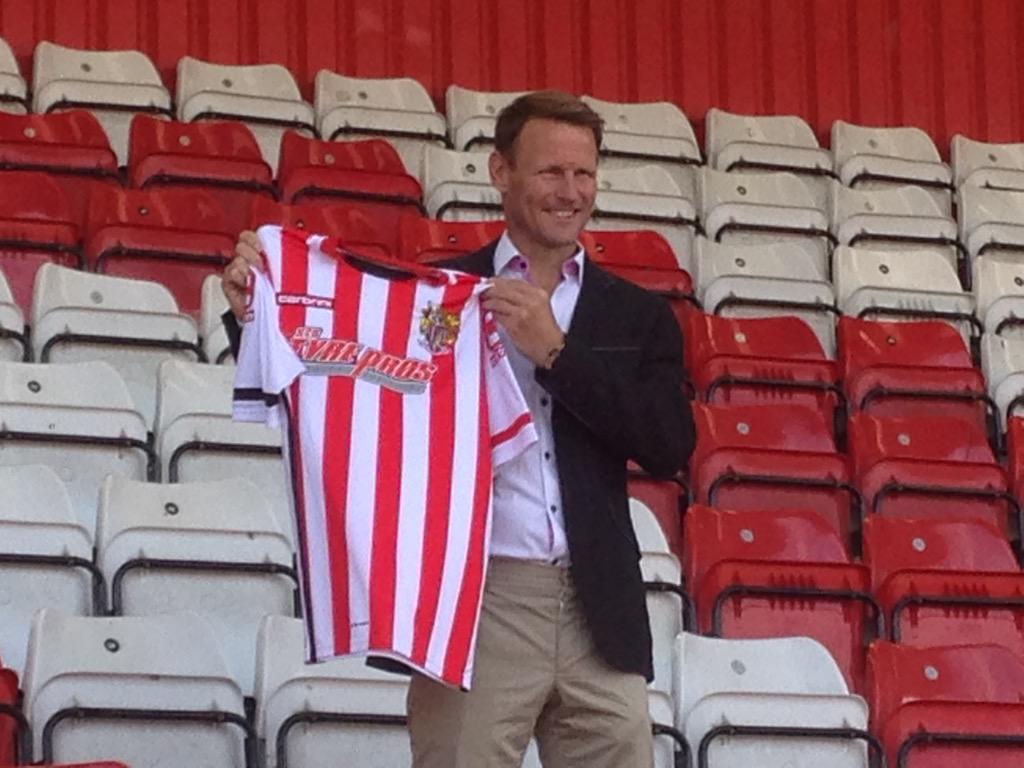 As I've said above, I can't understand the logic behind allowing Westley to leave in order to appoint Sheringham, think it's a massive gamble which I'm really not sure will pay off. Have to admit, despite my reservations I'm quite excited to see how he does, who we'll sign etc, Westley's left him with a solid foundation from which to build, hopefully we're able to push on and secure promotion next season!
New shirt by the looks of the picture as well, the excitement is just too much