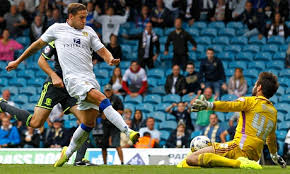 Leeds have now failed to hit the net in 180 minutes of football and the pressure will notch up some more as Leeds welcome Yorkshire rivals to Elland Road on Saturday.
Some will argue a point at home from the goal less 0-0 draw with Reading is a good point but I'm hoping most will think this is two points dropped at home.

Leeds showed positive signs in the first half, more energy, more direction and the tempo was indeed a better show than that against Brentford. But chances were not taken and Reading regrouped at half time and had the better of the game in the second half. Apart from the spark Billy Sharp brought to the game late on Leeds looked more unlikely to score as the game wound down to the final whistle.

The appreciation is there that the playing squad saw a huge influx and added to that a new manager is still taking stock after only a week in charge but football is a results business.

The game started well for Leeds but had Silvestri to thank for several key saves to keep Reading out. However they still just edge the half. But as they probed to find the leaks in Readings defence it seemed more and more they were running out of ideas.

Reading grew as the game went on and finished the better team. Both sides made changes in the second half but Readings bench looked to have the more danger to throw at the game. Leeds only real hopes were the fighting spirit of Sharp. Who from the bench nearly did nick a winner.

After the final whistle Darko Milanic stated he was happy with his first point for Leeds and his first point at Elland Road. But in the cold light of day I do find myself looking back at the bench we showed up with and where all of our attacking players were that were raved about in the warm summer months?

Reading yesterday the likes of Adryan, Benedicic and Montenegro are still not ready and gaining match fitness with the development team? And whats happened to Nicky Ajose? Who started the season so well looking sharp and full of running. How much match fitness and awareness do you need for the last twenty minutes?

The problem I saw last night was Leeds were trying their luck with two lads up front but it wasn't happening for them. Times like that surely calls for a jiggle in formation and players to give the opposition a new problem to deal with. Nothing ever changes if you keep asking the same questions. Only thing was we had no player who could play as a number ten, sitting behind the front two or wingers to feed from the flanks. The only thing that happened was like for like subs.

Sheffield Wednesday is the next up at Elland road. I'm not saying that the starting XI needs a major over haul but I think we need to start with Sharp and put out a bench with game changing players like Adryan and Ajose who I thought had been brought to the club with this in mind.

Cellino has said time will be given for Milanic to find the best XI and the perfect balance in his match day squad. But I'm sure he's not daft enough to realise the more points he can pick up the more time he will get to really apply his vision. Time will tell what Darko has up his sleeve, lets hope its some goals and three points to start off with.
You must log in or register to reply here.
Share:
Facebook Twitter Reddit Pinterest Tumblr WhatsApp Email Share Link