Despite a pretty average season, United are in the FA Cup final and still have an outside shot of threatening fourth. Only almost-Champions Leicester (39) have picked up more points at home than them (37).

Leicester are one win (or a Spurs defeat) away from winning the title. They've answered every question thrown at them and hopefully will continue to do so. Sod the "elite".

be very harsh on vardy if they clinch it without him on the pitch.

I reckon it'll be a draw. Without Vardy we don't have that same edge on the counter attack but we can still grab a goal. I don't think Utd will score more than one either if they do breach us. So I'll go for 1-1. The November game was a bit drab but for one special moment when Vardy broke the record, the rest of the game was a bit underwhelming really from both sides. I think we'll come away with a point, Chelsea will get something from visiting Spurs and we'll be champions ready for Everton at home.

If United lose this and City win, then goal difference will mean that a draw between City and Arsenal will all but ensure both sides will finish top four....

And if United win and City lose today, 4th will be in United's hands.

Can see a good game as Leicester will be
going hell-for-leather and United won't be able to pass them into boredom.

Great atmosphere generated by Leicester fans, almost like they are about to win the league!
https://twitter.com/WestHam_Central/status/726724658893086720 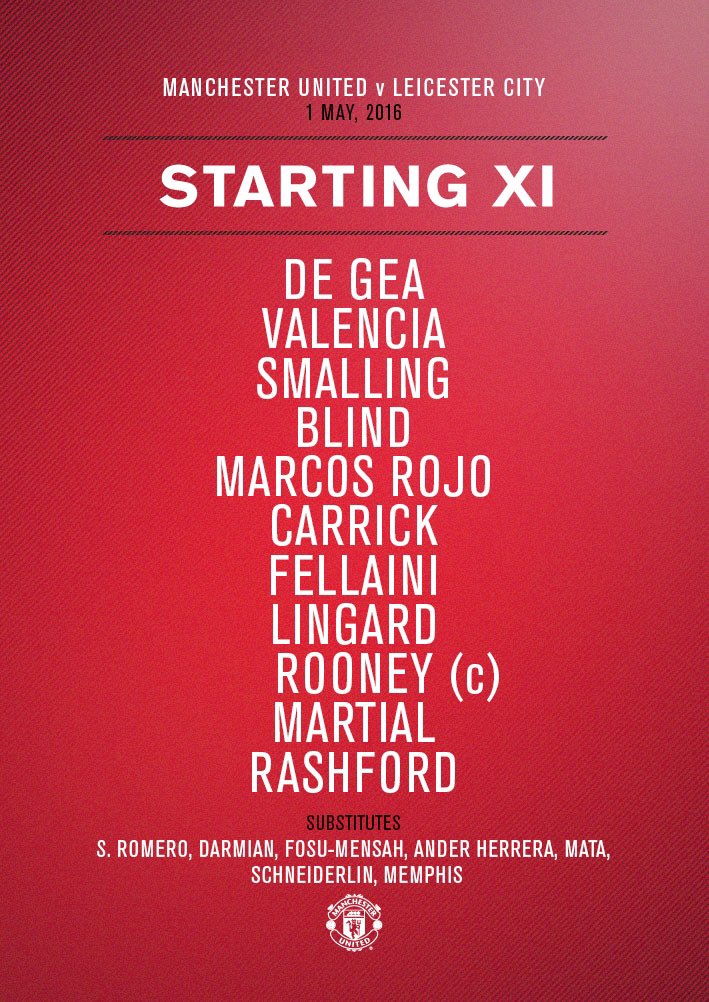 Beat you to it, Steve.

Interesting that we're playing Carrick over Schniderilin. Could be looking to play some balls behind the back line if Leicester are piling men forward.

We never pile men forward though. The defenders will stay back.

Think Herrera should be in the side. Don't know what Fellaini will offer really (watch him score now). Depay should be used instead of Lingard he's all right foot so why not? I'd also have thought Fosu-Mental warranted a start.

Ahhhhh, the good old days are back.

said it before, Leicester will drop points today.

FFS Leicester. You pick NOW to fall to bits?

Enjoy the entertainment, you are all welcome.

So glad we missed out on Rojo last summer. He's wank.

Simpson is massively the weak link for Leicester, he's giving Martial far too much space.

This game illustrates how important Vardy is to us. Even in the 45th minute, Schmeical catches a cross and where he'd usually be booting it straight for a break this match he holds it and waits.
We were pants for 10 or 15 minutes, came into it a bit more but we need someone pacey up front unless we get a set piece or some Ryad magic.
Think the ref got both the big decisions right.

SamScfc said:
Simpson is massively the weak link for Leicester, he's giving Martial far too much space.
Click to expand...

It's a bit unfair to say he's the weak link, he's up against their best player.
M

We are so much better with Valencia instead of Darmian. Gives us an outlet going forward and just owns his flank. Gives the right winger the freedom to do what they want.

Hope Leicester can hold on - think Chelsea will draw with Spurs tomorrow..

Over to you, Chelsea.

Hope Spurs win. Be good for Leicester to win it themselves rather than sat at home.