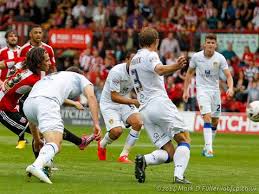 Leeds crashed to a 2-0 defeat at the hands of Brentford at Griffin Park. The away team never even got out of first gear as the home side walked to an easy victory after a run of poor form.

The Leeds side was a near perfect image in its starting line up that had been unbeaten in their four last outings but it appeared that the new addition to the management line up was too much for the thinking man at Leeds.

From the start Leeds stalled and struggled to grip the game as if they were scared to make an error going forward. It could be said that during the long journey south the team bus was full of over thinking and caution. Under the recent run of Redfearn the team played with no fear but with a new man in charge the players seemed to be worried of putting a step wrong but were undone with their fearful display.

Darko Milanic complained about his teams lack of energy and tempo but that style of play surely only comes from players who dare to up the pace of the game, taking it to the opposition. But instead we saw a Leeds Utd who were afraid to do anything but try and defend. However their lack of adventure and drive only allowed Brentford too much time on the ball and ultimately the goals came.