Players that are hindered by their reputation

How much of an effect does reputation have on games?

Jonjo Shelvey will be my example. Every week I see refereeing decisions go against him whereas if it was a different Swans player the 'infringement' wouldn't have be blown up by the referee. If he makes a borderline tackle, you can bet everything you own on him being penalised for it, every single time. When he's on the receiving end however the referee's tend to apply an opposite logic to which they punish him for. It's almost as though his rough reputation means that an opposing player has to go to extremes in order to concede a foul against him. You've then got the ripple effect of Shelvey being seen to mouth off or retaliate, further compounding his negative reputation. The ripple effect Shelvey can influence and lately he has taken strides to rectify that. The cause however is beyond his control.

Is reputation just a facet of the game? What can be done to prevent referee's from being swayed by reputation and subsequently adversely affecting the pattern of the game and quite easily the result, given that such fine margins often decide an outcome.

How can a game be seen to be fair when the rules are seemingly interpreted on a player by player basis?

Rules are definitely different on who is the infringing player. Alan Shearer used to be able to get away with whatever he wanted for the most part.

Lol at Felliani persecution, the guy consistently smashes people with his elbows and gets away with it.

Wash yer mouth out. Alan Shearer was a saint.

Karl Henry had a shit reputation, but he wasn't that bad

Humongous Fungus said:
Lol at Felliani persecution, the guy consistently smashes people with his elbows and gets away with it.
Click to expand...

Headbutting his elbow is totally a foul by the other player though. Especially if they dont even move their head.

Peter Crouch is a good example, regularly penalised for being too tall. 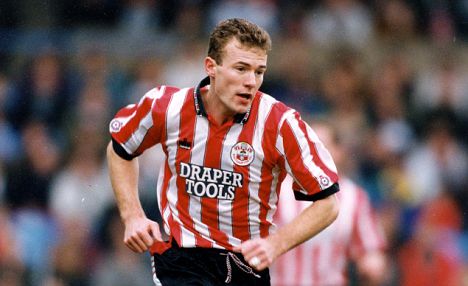 What relevance does that have to this thread?

Abertawe said:
What relevance does that have to this thread?

and boy is that shit !
A

You're one of the weirdest fuckers I've ever come across on an internet forum, quite the accolade.

Abertawe said:
You're one of the weirdest fuckers I've ever come across on an internet forum, quite the accolade.
Click to expand...

sorry about the sheep accusation im sure you never have