I think we'll have a goalkeeper, some defenders, a few midfielders and a striker or two.

But with today's additions;

I don't like the idea of two big lads upfront, though.

But with today's additions;

Here's Davies' goals with us if you're interested mate.

Aaron-Bcfc said:
Here's Davies' goals with us if you're interested mate.

Cheers - I had a gander at that earlier. Seemingly, a decent left-foot. I think he'll do okay here, providing he has the service.

F-I-R-T-H-Y said:
Cheers - I had a gander at that earlier. Seemingly, a decent left-foot. I think he'll do okay here, providing he has the service.
Click to expand...

Technically a very good player. Keep him fit, and as you say give him the service, and he'll be an excellent signing. Don't want to big him up too much as he has disappointed elsewhere, but I really liked him here.

F-I-R-T-H-Y said:
Cheers - I had a gander at that earlier. Seemingly, a decent left-foot. I think he'll do okay here, providing he has the service.
Click to expand...

I'd still have him back. He was decent in a team that were shockingly awful playing infront of the most un-creative midfield possibly the Championship has ever seen.

He occasionally looked unfit, but if you can keep his fitness levels high, he should be exceptional in L1.

Chances of this team lining up, probably slim to non.

Most likely at the moment:

Looks a bit depressing at the moment.

we're probably going to sign another three or four players before the start of the season... we've not played our first friendly...

Lots of new players then.

Millwall_Matt said:
Most likely at the moment:

Looks a bit depressing at the moment.
Click to expand...

Actually pretty pleased with the first xi on the whole. It's the complete lack of depth that is a worry at the moment.

Crewelad87 said:
If everything went to plan for us and we captured our top targets (which never happens at Crewe)

Chances of this team lining up, probably slim to non.
Click to expand...

Jones and Turton would start for sure. Steve has already said Turton is his first choice RB now that Toots has gone. And regardless of who we sign in midfield, I don't see Jones being benched. If anything, I think if we sign the players you list, we'll go with a 4-3-3, with Tate being removed from the starting line up for Jones. Then, if we struggle to adapt to that formation or the defence struggles, Tate can be inserted back in and we go back to a 5-3-2/3-5-2 or 3-4-3/5-2-3.

Actually pretty pleased with the first xi on the whole. It's the complete lack of depth that is a worry at the moment.
Click to expand...

Think we'll go with the 'proven' league one striker as Harris is clearly a fan. O'Brien to take over at some point in the season when Marquis proves inept.

Think our strength in depth isn't too awful, only a few short of a decent second squad:

Was pretty decent in his loan spells with us a few years ago...

Fedora Dale said:
No Will Atkinson?

Was pretty decent in his loan spells with us a few years ago...
Click to expand...

A good worker and a good squad player. Signed a new 2 year deal and if we don't sign anyone on the left it will be him but I like to think he is someone we can improve on I think L1 may catch him out - Bradford must of felt that way to as he featured heavily for them when they got promoted from L2 then released him. 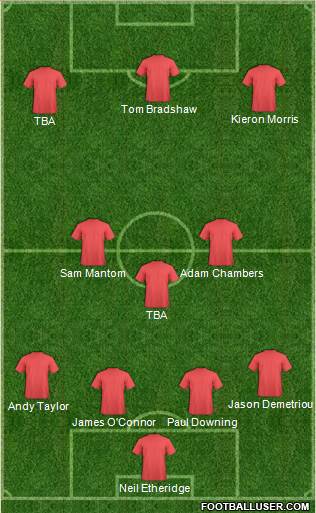 Goalkeeper is obviously weaker, but he is another project for our excellent goalkeeping coach Neil Cutler who had a big hand in turning O'Donnell from a reserve keeper for Chesterfield to one of the best keepers in the league. Hopefully the same thing will happen with Etheridge and the young Craig MacGillivray who also has good potential.

Back 4 looks solid. Downing drop's in and out of form but is across the board a good defender. A thing to note is that all 4 of those defenders as well as being relatively solid are all confident on the ball and are willing to play from the back, which is a big thing for a Dean Smith team. With Jason Demetriou as well we now have a more dynamic and attacking full back as opposed to Ben Purkiss who was good but not the most adventurous or dangerous going forwards. Problem here is the depth. Still need a new CB to replace Dean Holden as well as James Chambers who looks to be retiring from football, aye got a clue who would come in. Anthony Gerrard would be what many Saddlers would like but there is question marks about whether Deano would want someone with a rowdy reputation. Matt Preston is a young CB who it looks like will be given a more prominent role in the first team, and this might be his last year to break through, ridding himself of injury problems and getting game time. Rico Henry and Liam Kinsella are good back ups for the full backs. Both are from our youth system, and will have big futures in the game, especially Rico who I am confident will play in the premier league one day, pure class.

Midfield is still a question mark. Sam Mantom is one of our best players, so very happy with him. Adam Chambers is not very attacking or creative, but he does the important parts like breaking up play, and in this new formation him not being as attacking doesn't matter as much thanks to us having many more players up the pitch. The final CM is where Michael Cain played last season in this formation, but since it looks like his isn't coming back we need a replacement as Reece Flanagan the youngster firstly isn't ready, nor does this deep lying position suit him. We will bring in a midfielder here, the most likely is Oscar Gobern who I would be very happy with, but who knows.

Up front is where the main problem of the last 2 seasons need to finally be resolved. Up front is Tom Bradshaw, excellent striker but has dodgy hamstrings so we will need a capable back up that we're still working on finding. Right wing we have Morris who is our new youth team superstar, he was bloody excellent in the last 2 months of the season when he came back to us from Wrexham where he was on loan. He is a breath of fresh air in that he can take on a player and beat him, as well as not being afraid to shoot. I predict big things for him. LW we hope to get back Jordi Hiwula from City, who was excellent, we will be going back in for him. Back up for the attack would be Jordan Cook, Anthony Forde and Romaine Sawyers who have all done okay, so they're quite good to have to push the first teamer's, and to hopefully as well take their places through good performances. So relative pleased up front if we get Hiwula and another decent striker to backup Tom Bradshaw.

Overall I'm happy with the way things are building, but there is still a few question marks about the remaining 3 or 4 players to come in, as well as the tactics that will be employed by the management. We need to be more attacking and the management has said we will be, but it remains to be seen.
Last edited: Jul 3, 2015

Why is Sawyers not considered a starter!? Wasn't he one of your best players last season?

Dan Phillips said:
Why is Sawyers not considered a starter!? Wasn't he one of your best players last season?
Click to expand...

We changed formation at the back end of the season to try and get more goals, and we did that by pushing the wingers forwards and dropping Sawyers' position in the hole into an extra midfielder. We played much better without him basically. He's a great player, good vision, good footballing brain... he just under delivers and splits opinion massively. He is so creative yet doesn't contribute in assists or goals nearly enough, we scored more and looked more dangerous in this new system. It's a shame, because he is very talented, he just doesn't do it consistently or give us the right kind of results to warrant a change in system to accommodate him for the time being.

That is a surprise but definitely makes sense given the direction you want to be heading in next season.

He was your stand-out player at your place last season, yet, as you say, didn't create anything clear-cut.

Wouldn't you play Ricketts at right back?

Dan Phillips said:
Wouldn't you play Ricketts at right back?
Click to expand...

I was thinking that but considering we missed out on McMahon and have been after Ricketts since March, I think he'll be played as a CB. Would prefer him to be played at RB if I'm being honest.

I'm making it up as I go along
Click to expand...