...for a new series of Robot Wars! http://www.bbc.co.uk/mediacentre/latestnews/2016/robot-wars-returns

I surely can't be the only one who has mourned its decade plus absence from our TV screens; who has yearned to see hastily cobbled together bits of scrap metal bumble around an arena once more. Hope Craig and Phililppa and Chaos 2 and George Francis and Razer all return. Also rather hope the robots aren't THAT MUCH better than they were in its original incarnation - will be rubbish if they're not all RATHER SHONKY and RAMSHACKLE.

Also, this really isn't the sort of thing one ought to broadcast but I got 18/18 on this quiz

Hope someone else can match this DUBIOUS ACCOMPLISHMENT - http://www.buzzfeed.com/alexfinnis/can-you-still-name-the-robots-from-robot-wars#.khj7N5J29k

Sorry PP, but I was and always be Team Hypnodisc. I'm so happy this is returning.

I was a panic attack fan. Not literally mind you.

The Paranoid Pineapple said:
Also, this really isn't the sort of thing one ought to broadcast but I got 18/18 on this quiz

Hope someone else can match this DUBIOUS ACCOMPLISHMENT - http://www.buzzfeed.com/alexfinnis/can-you-still-name-the-robots-from-robot-wars#.khj7N5J29k
Click to expand...

Only 16 for me, I'm disappointed in myself. 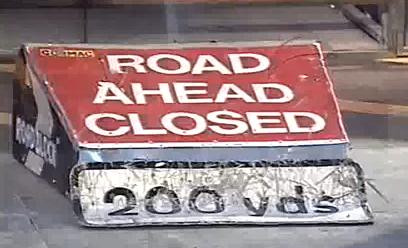 Saw an old episode of this on Challenge the other day. Great news! As long as they aren't all ridiculously technical and are still held together by spit and prayers then it'll be fantastic.

It's awesome that this is coming back, used to like watching Robot Wars... only got 13 on that quiz though, which is disappointing.

Used to love the games as well, had one on PS2 I think as well as a shit Gameboy game. In fact, the PS2 one may have been shit as well, but I was young and didn't know any better so it was awesome at the time. Making my own robot, upgrading it and shit. Fucking awesome. In fact, I'm now more excited about the prospect of a new shit Robot Wars game coming out than I am about the actual shows return.

Great news! Hopefully Craig Charles can find some time between Funk and Soul to present this.

Great news, I was late to Robot Wars, but got into it in the last series. Hope its as mad as the original!

I went to "Robot Wars Live" in Cardiff.

You're all armchair wankers.

Aberstone said:
Sorry PP, but I was and always be Team Hypnodisc. I'm so happy this is returning.
Click to expand...

That's fair enough. As much as I was primarily a Razer man, Hypno was undoubtedly a great machine and a real Wars innovator. All the best robots made use of either a crusher, a flipper, a self-righting mechanism or an erm, spinny thing, and, although it spawned the odd imitator, no one did the whole spinny business quite like hypnodisc.


Veggie Legs said:
Only 16 for me, I'm disappointed in myself.

Think JP was born to be a Robot Wars commentator (a better fit for him than football I reckon).

Good robot (actually all of the ones in this thread are pretty ace). Shout out also to Oirish entry Diotoir whose main raison d'être seemed to be to get nicely SINGED. Such PRETTY FUR though.

They'll probably ruin it by getting Clare fucking Balding or Sue fucking Perkins to co-present!

Delighted to see the show return! Hope Craig Charles can present it again. A staple of my Friday evening growing up! Agree that the robots have to still be pretty ropey and not too professional.

Razor was from Bournemouth so I always rooted for them, and everyone had a 'friend of a friend of a friend' who knew one of the team. But also remember how devastating and innovative Hypnodisc was when it first appeared. Wheely big cheese was another favourite.

Leewilson said:
I was a panic attack fan. Not literally mind you.
Click to expand...

Me too! So glad this is making a return to our screens.

As a kid I was a huge fan of the first 2 series. Always preferred it when they had the varied events rather than pure arena battles. I think it got tiresome after the first couple of series and the house robots started to get overly involved in the fights. I'll be honest I've looked at some of the old episodes on challenge recently and I haven't really enjoyed them.

How has Wheely Big Cheese not had a picture in this yet? You peasants. Can't bloody wait. I've been watching a lot of the old episodes recently, all readily available on YouTube. Thanks be to God.

Very impressed at how #tinpot many of the efforts were. There was CV, a robot designed by the Open University that looked like a lavender-coloured shoebox with a weak hammer mechanism. The Tartan Terror from Alloa was a motorised wooden barrel in a kilt, while Granny's Revenge was a remote controlled scarecrow on a mobility scooter.

Still adore Hypno-Disc, the great entertainer, who absolutely merked several robots at some point, but its engine conked out before its time. Then Razer was the consummate robot, slow but massive destruction, dynamically built to be hard to attack and with a beautifully thought out self-righting mechanism. As much as Chaos 2 was terrific it was too clinical.

Feel sorry for the eight-year-old kids who'd stand in the boxes with their fathers, watching as their parent's shoddy creation got torn to pieces after its battery ran out six seconds into the battle, seeing their lovingly-crafted but flimsy machines get their wheels cut off, their circuitry burnt and their bodies crushed to the cheers of a family audience.

'Style, control, damage and aggression' should be the criteria for judging everything.

Currently going through the fifth series, but I couldn't resist a "before" and "after" look at the first and last finals of the game.

The first series... jeez. Clarkson's awkward presenting, hosts of robots of diverse sizes, many with no weapons, others with small buzzsaws, spikes and hammers. The grand final was a free-for-all between six robots, none of whom would've stood a chance in the first round of a heat in the later series. The format of the show was an admirable effort but felt like any old cheesy gameshow: short assault course, sumo wrestling with Shunt, then onto the arena. The arena battles were very tentative, a shoving game with the unattractive slow-burn of floppy hammer mechanisms. One robot's weapon was simply a small, dangling mace.

Never saw the final series because I think Robot Wars was sold to Fox Kids by then. Didn't realise it ended so ingloriously. For those who didn't see at the time, there was a robot called Storm II which did its damage through ramming oppo robots with its sheer power, and only had an active weapon installed to comply with show rules. It came up against Typhoon 2 in the final, which had a spinning blade around its full body. The final went down to the judges but audience consensus was that Storm II walked it, however the judges gave the trophy to Typhoon 2. There's a pretty strong theory that the show producers worked against Storm II winning due to the unentertaining nature of its attack. It'll be back for the new series anyway so we'll see how it gets on.
Last edited: Jan 19, 2016

God, I remember Granny's Revenge - the state of that thing! There was an impressive lineup of awful walker robots as well, some of whom could hardly move, let alone inflict any damage.

Having consulted Wikipedia I'm not sure I saw either of the last two series. Series 7 I certainly wouldn't have seen as I would have been at University sans TV (I was probably quite unaware that it was still being broadcast at that point). I could conceivably have seen Series 6 but it apparently featured house robots Mr Psycho and Growler who I have NO RECOLLECTION of.

I might try and revisit some of the early ones because it's been eons since I've seen them (from memory I quite liked the gauntlet but some of the trials were a BIT RUBBISH). There's no doubt the robots got an awful lot better as the show went on.

Haha, I remember a walker robot called Widow, based on a spider obviously, with dozens of spindly "legs" that would all go out of action if one got touched. No idea why someone would put effort into that kind of thing considering how even a medium-sized remote control car could ram it to death.

Think I watched bits of series six as Growler rings a slight bell. I also remember the gauntlet being really good but revisiting it any post-series two robot driven by someone over the age of 12 had a good chance of conquering it. Seven-year-old me had this memory of it being a serious meat grinder of a course with countless hammers, pits and whirling knives.

Would like to get a flavour of how robots might perform in 2016. Apparently lithium batteries will provide a lot of them with more power and there's even a possibility of 3D printed 'bots. I can imagine the horsepower of the engines going up a few notches which could knock out some very good robots solely because they were second to react when the opposition decided to shove 'em. The house robots will have to become slightly more sophisticated, and even the perimeter barrier will have to be better built to resist some of what's coming up. Razer will be taking part (<3) but it'd be wonderful to see Hypno-Disc and Diotor back in the game too.

Only got 12. Matilda was my favourite cos she looked like a beetle. Also liked Diotor for the underdog who always set on fire. I mean seriously, what an obvious design floor.

Veggie Legs said:
Only 16 for me, I'm disappointed in myself.

Credit to him for his enthusiasm (even into the later series). I get the impression he would happily embrace excited commentary for a country vegetable show and sometimes during a goal mouth scramble on MOTD his commentary does make me think of Robot Wars.

I was always a Chaos 2 fan, but Razer was undoubtedly the best robot on the show. Bitch slappin' the house robots, the gall of the fucker.

"The One Where They Enter Joey in Robot Wars"

Jonathan Pearce returning to commentate is the best thing about this.

Hypnodisc getting the self writing mechanism was the biggest game changer in 20th century history.

Veggie Legs said:
Can't believe no one else has mentioned the essentialness of Jonathan Pearce returning in the commentary box.
Click to expand...