I toyed with whether to put this on here or not but anyway, I'm doing it. I don't usually and I think this is important. Mods, ban me if you want.

After the Southend/Cambrudge game on Saturday, an ordinary Cambridge fan named Simon Dobbin, a 41 year old man with three children, was walking back to Prittlewell train station in Southend after watching the England rugby game when he and a group of his friends were jumped by a gang of thugs.

Simon was beaten heavily, some of the reports are just sickening - you can get the gist just by reading online so I won't bring it here. He is currently on life support at the Royal London hospital and it's touch and go whether he'll make it.

Simon's family and friends are obviously sick with worry and have set up a page for fellow football fans to donate so they can stay by his side in London and give him the best possible chance of survival.

Obviously no pressure on anyone but for those who do wish to donate, can do here: http://www.youcaring.com/emergency-...e-family-and-simon-himself-/326399#supporters
L

The Guardian's article gives a good idea of how sickening this attack was.

Jesus Christ what is wrong with people? It's football for Christ sake. Absolutely disgraceful. My father in law is a big United fan and went to the game so when I saw there had been trouble I was very concerned for him. Luckily he was fine but I'm sad to hear about this poor guy.

Really hope the Simon pulls through an the cretins responsible are brought to justice. No place for this.

Terrible to read something like this. Can only wish the guy well and hopefully those involved are locked up.

There is a thread just like this one in the Championship section for a poor bloke who has been attacked at a Wolves v Watford game at the start of the month aswell. It's fucking sickening. I really really hope Simon can pull through.

It fucks me off, I have a mate who has been banned for 3 years for shaking a Concord Rangers players hand on the pitch yet Scum like this still get to go to games and do this to somebody. What is the world coming to.

Going to a Football match between Southend and fucking Cambridge in L2 and this happens.

Clear case of attempted murder here, when animals like this are sent down for many many years it may just stop others, you can't reason with these loons , get them off the street for a long long time

Nice one laker, think it warrants it's own thread.

Still can't believe this has happened, I don't know Simon but know how easy it could have been one of us, I just don't understand why anyone would do this to another human, there's absolutely no excuse for this, just hope the justice system does it's job with a LONG sentence to those who are convicted.

I dont think I will ever understand how human beings can just attack randomers and use the veil of football to justify it in their sick minds. These people are not football fans, just mindless thugs who need jailing for a long time.

Hope the guy pulls through with no long term damage.

Having seen the Facebook group set up for him, I recognised him straight away. Don't know him well, but I've definitely bumped into him over the years with United and from what I remember, he's nowt but a good bloke. Could have been anyone.

Not sure what to add that hasn't been already, but this is a horrific incident and I hope full well that he survives and makes a full recovery.

Brings me out in a cold sweat to even think of these things.
T

As mentioned, absolutely sickening, if these morons want to kick each other to death in a field miles away from the rest of us then I couldn't care less, but the minute they start picking on supporters who just want to watch their team and have a few beers with their mates, then that grates, because for lack of a better word it's completely undeserved, and you're then putting all of us in danger, you're making all of us wary, you're changing the game for all of us. I was in that pub before the game, I've stayed late for a few drinks after away games before, it could've been me or my mates. Luckily it wasn't but unfortunately it was Simon, and it's absolutely senseless, there isn't a penalty dear enough for these bastards.

I'll be donating in due course, and I sincerely hope there is some positive news in the next couple of days. I am sure we will give him a fitting tribute on Saturday and even more so at the Abbey on Good Friday, hopefully Simon will get to see us there again in the future too.

I hope we can keep this thread about Simon and air any views about the circumstances and arising issues on a separate thread. I hope that he recovers fully and is back on the terraces next season. To put football into context, who cares what league provided he's back and well.

I considered putting a link on here but couldn't and can't think of a positive thing that might come out of the experience other than a collective venting of sorrow and anger. Sticking with my initial thought, good luck Simon.

Bloody hell battered for supporting another team and i thought thosedays were long gone, as a fellow football fan i wish Simon a full recovery and as for those who did this to him i hope their caught and given a long stretch in prison.

Cambridge United are pleased to hear that Simon Dobbin has been moved to a rehabilitation ward at Addenbrooke's hospital and is showing signs of improvement day by day.

Against the odds he is making progress, continuing to amaze the neurologists and nurses who are caring for him.

Cambridge United are pleased to hear that Simon Dobbin has been moved to a rehabilitation ward at Addenbrooke's hospital and is showing signs of improvement day by day.

Against the odds he is making progress, continuing to amaze the neurologists and nurses who are caring for him.

Fantastic news regarding Simon i hope he can make a full recovery, sounds like he is determined to get better.

Nobody who goes to watch a matc h should be beaten up and end up in hospital with lifechanging injuries.

Not great news I'm afraid. The club and a number of fans have and will continue to keep an eye on developments. Latest report is:

"I have spoken at length with Simon's wife and firstly she wanted to thank all of you who donated money as she is now relying on it to allow her to travel to and from Addenbrookes every day. She has had to give up her job to dedicate her time to Simon. again the money is a great help at the moment with one less thing for her to worry about.

As for Simon she says he is progressing slowly he is alert and knows what is going on around him as well as who everyone is. He cannot speak but has mouthed simple words. He is due to have an op to enable him to be fed directly into his stomach as he is currently fed through a tube in his nose. He is undertaking physio to enable his muscles to develop again where they had withered whilst he was in a coma. He had other injuries which have also progressed well.

They will be moving him to a specialist unit in Norwich in few weeks and they wont know the full extent of any recovery for up to 2 years! He needs to learn how to speak walk and eat again. So it will be a long time before we see him up the Abbey."
Last edited: May 22, 2015

Cheers for the update on Simon i just wish it was better news. The medical world come up with new treatments all the time so let's hope they can help him in the future.
L

A more positive update that I've just caught on our forum: 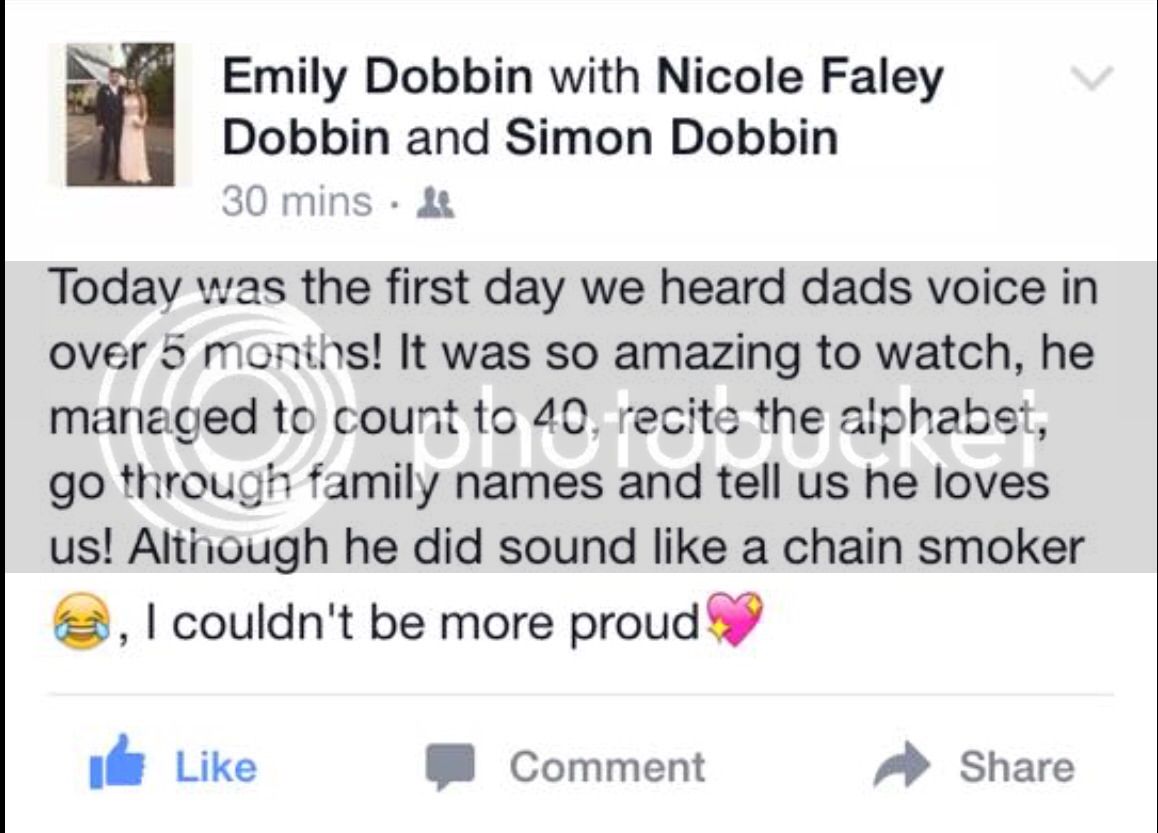 I love hearing good news,hope he can recover to enjoy life with his family, he deserves to after all he's been through.

Fantastic update. Been following this relatively closely since it happened. Hope he continues to pull through.

Another reason (as if you needed more than one) to prefer Orient to our ugly seaside friends down the A127.

Anyone know the latest regarding the bastards that did this, have they been caught yet?
L

It's obviously superb news, really hope he makes it back to the Abbey this season.

I can't remember where the arrests have got to now. At one point they were arresting loads and bailing them but not sure what stage it's at now.

So sad to read this.

Aw what a shame that he has regressed, hope he pulls through it and gets himself back into a moderately normal lifestyle.
Last edited: Feb 18, 2016
L

It's such a sad and disgusting case. The fact there's a chance no one will be convicted of his attempted murder is even more distressing.

So sad to read. Hopefully when he is back home his condition improves.

I am only 25 so missed the days were fighting was still very common around the grounds but it's something I will never understand.

Supports
The Cobblers and Gladbach

I remember the days when your opponent went down and was unable to defend themselves you stopped your part in the altercation, why nowadays do the thugs think that it is then OK to treat their head as a football or to jump up and down on?
Irrespective of that, jumping innocent people who are only interested in watching sport is an action of complete and utter cowards, their opposite allegiance is not an excuse. Those protecting the guilty are as guilty as those that committed the crime...
Absolutely sickening...
Good luck to Simon and his family...

Depressing as fuck to read, that. Really thought (and hoped) he was on a good path to recovery. I hope there is some c*** out there reading that thinking of turning himself in if there really is no chance of a prosecution the hard way. Whoever it is must know and I hope it weighs on their soul when they hit the pillow every night.

Judge Dredd said:
Depressing as fuck to read, that. Really thought (and hoped) he was on a good path to recovery. I hope there is some c*** out there reading that thinking of turning himself in if there really is no chance of a prosecution the hard way. Whoever it is must know and I hope it weighs on their soul when they hit the pillow every night.
Click to expand...