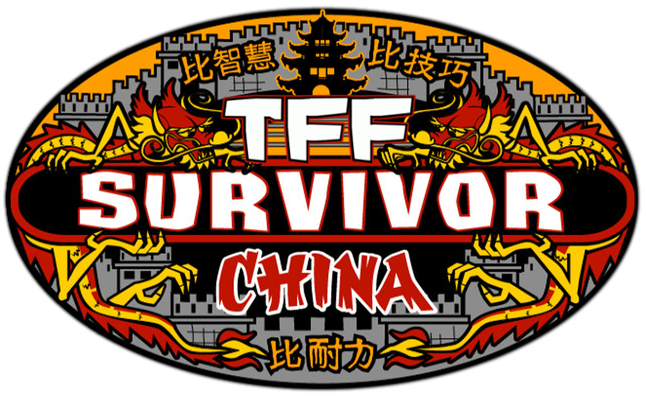 ​
Hi everyone! This is a game where two tribes will compete against each other in challenges. After each challenge the losing team must vote off one of their own at Tribal Council.

The two tribes will eventually be merged into one. The contestants will then compete as individuals in challenges, trying to win individual immunity from being voted off.

Ultimately only one contestant will be crowned the winner and sole SURVIVOR, joining previous winners Leewilson and Veggie Legs in the annals of TFF/1FF history!

Race to the Finish

The End of Xue Zhao Yi

Where in the World?

Don't throw it away!

Tribute to the eliminated contestants

Yeah I'll do this again. I was pretty poor last time so I hope for a better performance this time around.

I'm away for a week in July will it likely be finished by then?

Definitely up for this. I'm in.

These challenges do not determine which tribe goes to Tribal Council. The reward on offer in these challenges can vary, but often part of the prize will be some kind of advantage for future immunity challenges.

The person who receives the most votes is eliminated from the game.

If two or more people are tied for the most votes at a Tribal, anyone can be randomly selected to be voted off apart from people with immunity.

Any bags of rice you consume (bid) will be used up, even if you don’t win the advantage. You can start sending in your decision regarding this for the first immunity challenge now, and you can change your rice ‘bid’ as many times as you like until the details of the challenge are revealed. At this point I will also reveal exactly what advantage is on offer, and you will have a 30 minute window to change your bid one last time should you wish to. If no one on your tribe sends a bid in I will assume your bid is zero bags of rice.

If the highest bid is a tie, no one wins an advantage.

Rice advantages for immunity challenges will be up for grabs until the Tribal Merge. I will not reveal exactly when this will happen, you will have to speculate amongst yourselves. But once the individual challenges start, there will be no more rice advantages to be won.

There may be occasions in the game when a contestant is sent to Exile Mountain. This isn’t being eliminated from the game. Whilst here they cannot post in the thread or talk to other contestants outside of the thread (about Survivor).

Whilst on Exile Mountain they may miss challenges and Tribal Councils, depending on how long they have to stay there.

These are won in challenges. With these the immunity is always for the next Tribal Council you attend. They can be passed on publicly to other contestants at Tribal Council (before the votes) or of course you can keep them for yourself.

There is an answer for this that you need to PM me. That’s all I can tell you here. Clues will be up for grabs throughout the game. You can make up to 10 guesses a day so don’t be shy to have a go! You can also share & swap clues with other contestants.

Also – at any point, each individual contestant can ask me one yes/no question about the idol which I will answer.

This idol can be used secretly at a Tribal Council either on yourself or another contestant. This means that the individual in question will gain individual immunity, and this won’t be revealed until all the votes are in. Any votes cast against you would not count in this situation.

The idol can be played at any Tribal Council except the final one (when there are 3 contestants left).

If someone finds the hidden immunity idol they can also pass possession of it to another contestant on their tribe. The contestant they passed it to then has full possession of the idol unless they pass it back. If the person who originally had the idol passes it on in this manner and is voted out of the game or sent to Exile Mountain, the person who receives the idol can still play it in their absence.

The two finalists will team up with 3 eliminated contestants each in a best of three challenge series to determine the winner and sole SURVIVOR!

I will ask each finalist to give me their first choice set of 3 contestants who they want to be on their team for the final. The order for these 3 doesn’t matter, as any contestant who appears in both first choice lists of 3 will then choose which finalist they would prefer to join.

Each finalist will also give me a list of 3 reserve choices. The order of this list of 3 does matter, as a 1st choice reserve will automatically join the finalist they were selected by (unless of course the finalist gets all 3 of their first choice team) unless this contestant is the 1st reserve for both contestants, in which case the eliminated contestant will again be choosing a side!


Techno Gypsy said:
Yeah I'll do this again. I was pretty poor last time so I hope for a better performance this time around.

I'm away for a week in July will it likely be finished by then?
Click to expand...

I didn't know you were Natch until this post!

(Techno in the username I mean rather than what you're calling a poor performance! You were on that Tandang winning streak as I remember.)

Yeah it will be finished by then in all likeliness.
Last edited: May 23, 2015

Just out of curiosity, what are the sort of challenges?

And when's the start date for this?

In please! I remember following the last Survivor and it looked great fun.

last request said:
I didn't know you were Natch until this post!

(Techno in the username I mean rather than what you're calling a poor performance! You were on that Tandang winning streak as I remember.)

Yeah it will be finished by then in all likeliness.
Click to expand...

Yep that's me. I was Tandang all the way.

JJH said:
Count me in!

Just out of curiosity, what are the sort of challenges?

And when's the start date for this?
Click to expand...

Can't reveal too much about the challenges......yet

The first challenge won't start until after NOTW is finished, the town has the wolves on the ropes though (could be bad or good for you depending on your team alignment

) so it could be very soon.

In. I hope to go one better this time.

I'm getting my house next week so will be a bit busy, but I'm not missing this!!!!

"joining the winners Leewilson and Veggie Legs" Erm, excuse me?! This mo'fo is planning on being a two time champion. Unless there's a lot of fastest internet rounds, then I'm fucked.

I know you said there wouldn't be, but pleeeeeeeaaaaaaassssseeeee use a wordesarch to annoy everyone!

I'm in. Hopefully I won't be out straight away this time.

Rammy said:
I know you said there wouldn't be, but pleeeeeeeaaaaaaassssseeeee use a wordesarch to annoy everyone!
Click to expand...

I stand by my no wordsearch guarantee though.

The Hand of Dom

Dom is in. Obviously.

SUTSS said:
I'm in. Hopefully I won't be out straight away this time.
Click to expand...

Sorry about that mate

Me. Assignments are finished with after May 1st.

Spirederman said:
Sorry about that mate
Click to expand...

I don't blame you. I blame Oaf.

In please. Enjoyed the last one.

Not sure if I'm going to be defending my title, I've got a lot less time now than I had for the last game.

I am 3 weeks away from exams yet fuck them, i'm in.