Cant wait for this one. Sell out crowd for sure.

Assuming there a lot of Pompey fans that cant get tickets for it due to our stand issues.

Both teams are on great runs of form and are scoring loads atm. I think if you finish above Pompey you will go up automatically.

Last season Ricky Holmes bagged the winner against his old club where he was voted player of the season. Seems to be a mixed view of him from most Pompey fans but us Cobblers love him, he has been incredible since he signed.

Guessing goals a plenty in this, going for a big 3-2 win for us (obviously a Holmes winner).

A win here would be massive. Also, because of the pub fire two mobile bars are being set up behind the North and South stands. Good idea, and also good to take advantage of Pompey's crowd.

Hopefully we'll have some sort of tribute to Rob as well, will certainly be quite an emotional day.

18 months at pompey and less than a year at cobblers. He with us for longer than both of you combined. Holmes is a class player and was a big loss, if he hadn't been injured then we wouldn't have been relegated.

Holmes was decent for us, certainly better than Bennett who we have now. He went missing in games but he was playing in a poor team and probably wasn't managed well. Awford was an idiot for letting him go.

This is our biggest game of the season so far. Both teams are playing well but I'd take a draw if offered. If we win this, I think we kick on further and go on to win League Two.

Think it'll be quite a tight game myself. Wouldn't mind a scrappy draw and a win at York on Boxing Day. Should be a great atmosphere anyway, game of the day in League 2.

Be very happy with a point.

Northampton seem to be well up for this game looking at their local press and could hit us like a train.

Holmes? Always liked him. Could see a decent player in there somewhere, but seemed to have his confidence drained in his time with us. Probably a combination of playing in a bad team, having his natural game trained out of him, and the pressure from a big expectant crowd.
Went to this one last season as he stole the show. You could see he was well up for it. But like to think he's got that out of his system now. Fingers crossed for an ineffective cameo sub appearance.

If we can avoid defeat, then our away form is as good as any in this division particularly as have played most of the top sides at their place and remained unbeaten. With the home form coming together, if we can keep the loan rangers up front, I think we'll be in for a very strong new year.

How we lost that I really don't know. 2 good teams playing a very decent match, and they pinched a winner towards the end. Cresswell and Calvert Lewin hit the bar with headers in a breathless second half, and O'Toole also should have scored.

Both teams were on top at different points during the game, and a draw was definitely a fair result. However, we can take heart from the fact we more than matched one of our main promotion rivals. 2 wins in the next week and this one is forgotten.

Must also say there was a belting atmosphere at Sixfields today

Also the first Pompey was so far offside. Nothing marginal about it, just a plain howler. Thought the officials were poor all the way through today. Never mind, congrats Pompey, we both look very good sides at this level.

Very happy to get three points. The result (and to a point the performance) at the league leaders puts down a marker to everyone else with aspirations to go up.

Still have concerns that our run of form is based around 2 loan players who if recalled could see us back to the sterile, ineffective side we were up until a month ago.

However, right now I believe that finally other sides in this league have an element of fear facing us which we all rather naively believed would happen the moment we rolled up in div 4.

That is a massive result for us. Sounded like an excellent game and Northampton will be there or thereabouts based on that showing. As Bar said, so much of our form has relied on the Sheffield duo that you'd worry if either of them are recalled. McNulty should be staying til the end of the season, though.

Oh and for those saying that our equaliser was "miles offside" this picture shows he's level when the ball is played. 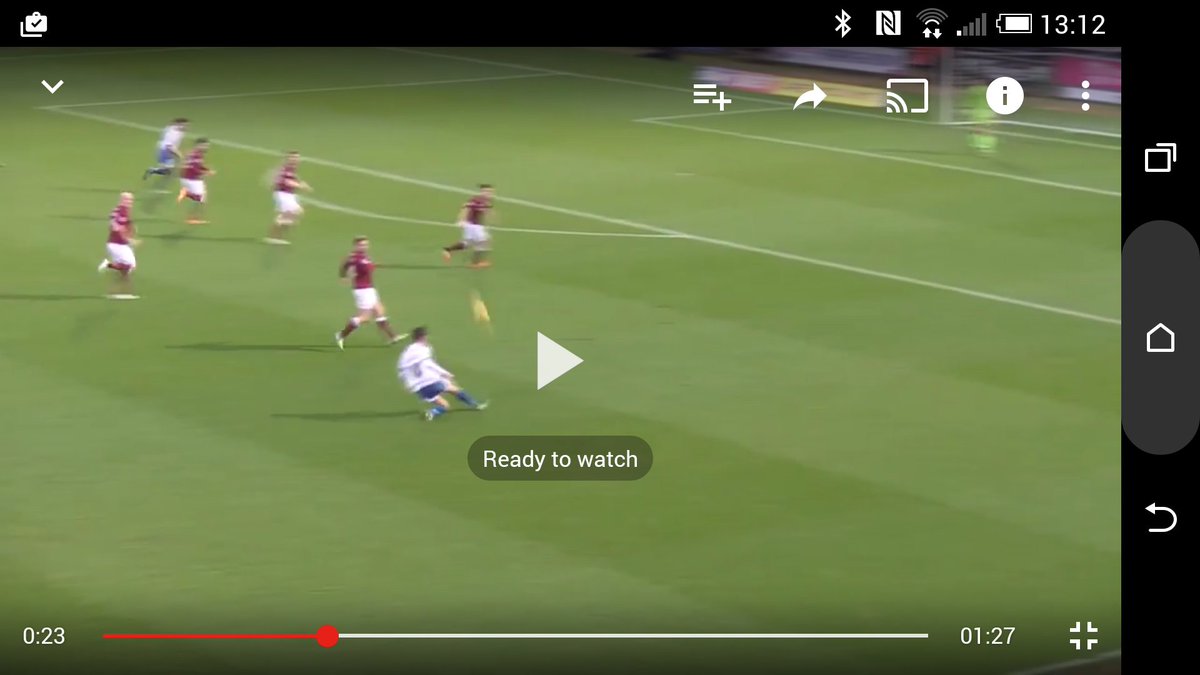 For a start, that screenshot is not where the ball was played other wise the player would have been five yards off the ground. Obviously it wasn't miles off, but offside is offside. But unfortunately not when the linesman is positioned behind the kicker.

When the ball is actually played, you can see he is offside Don Tonberry

EricSabin said:
When the ball is actually played, you can see he is offside Don Tonberry
Click to expand...