How Easy Is The Ground to Get To:
By car, you'll probably be taking Junction 24 off the M62, taking the A629 exit due north off the main roundabout and following that for a few miles until you reach Halifax town centre and the Shay on your right. Not the easiest, nowhere near the hardest.
By train, you're served by Leeds and Manchester, Huddersfield less frequently, and best of all the Grand Central line stops at Halifax from London and so on. Sadly, Halifax is no longer a major station with only two platforms for the time being, but at least the former platforms are now the grounds of the Eureka! science museum. When out of the railway station grounds, take a left and after seven minutes you'll be at the Shay.

If Applicable, How is Parking Near The Ground?
The ground has a good carpark to its east that usually sells out despite ample size. There's a more basic car park on the banking above it also on Shay premises. For away fans allocated the Skircoat (West) Stand, there is another, smaller, basic car park. Parking at the Shay is £3. I recommend using a smaller car park next to the Three Pigeons pub, between the railway station and the ground, just five minutes away. This is owned by the car wash next door and when they're open they'll informally charge 50p/hour, otherwise it's free to use and always has spaces. Alternatively, try street parking down the cobbled road to the east of the ground that goes under the railway bridge.

Based on Where You're Sat, How Is the View?
Predicted followings of >400 tend to get the northern edge of the East Stand. The view is as good as it gets at one end of a touchline stand. Larger followings get the Skircoat Stand, which has some unhelpful stanchions. >1000 followings will also get the very special North Stand open, a fantastic terrace. Enjoy it.
The one concern is for fans in wheelchairs. Do ring the club, as I have a nasty feeling you might end up on the hard standing at the front at a big game.

If You Ate at The Ground, How Would You Rate the Food?
Food at the Shay is currently all run by a small family concern, who do the usual stuff for relatively good prices, including several pies and pasties. Chips and peas are nice with all the sauces you could ask for, but I don't usually get owt else. The prices are merciful for football ground standards, but the only example I can name off-hand is 70p chocolate bars and £2.30 for chips and peas.

How Was The Atmosphere At The Ground, From Both Sets of Supporters? Does the Stadium Hold the Noise?
The stadium does hold noise well, but unfortunately there usually aren't enough in it to make that appreciable. The Skircoat Stand has excellent acoustics due to its pitched roof. The terraces aren't as good due to raised cantilever roofs, but are still decent. Sound carries slightly less due to support being low and concentrated towards the top of the stands.
Due to the sparse attendances at 98% of games, the atmosphere is naturally pretty dead. It's more an indictment of supporting your local team being such a minority hobby than the fickleness/silence of the resilient core fan base. The stadium was rebuilt when home support briefly spiked to 3,000, can potentially hold 14,000, and can't feasibly be shrunken!

How Are the Pubs and Local Attractions in The Local Area?
Pubs have taken a fall here recently but there are still some stops that are as good as you'll get anywhere. The Three Pigeons on the way to the ground is a treasure, selling four Ossett beers and a few regularly rotating guests. It's one of just three art deco pubs in the country, with four snug, open fire rooms reaching out from the bar in the middle. Dirty Dick's (HX1 2LH) up the road is lively, does several guests, is much better than the name suggests and does very cheap pub grub. Ring O' Bells (HX1 1QS) by the minster also does a lot of real ale and is a comfy venue. If you've come by car though my expert advice somewhat further out is the Big 6 (HX1 3HG) at the top of Savile Park, a truly unique and welcoming pub within a cobbled terraced street and even better than the 'Pigeons. Less than £3 a pint wherever you go out of those.
Visited less by me but also highly rated are the Shears Inn (HX3 9EZ), tucked down the road from the east of the ground at the bottom of the valley on Boys Lane by Hebble Brook, which does proper meals. Also popular and cheap is The Cross Keys (HX1 2SH) to the west on King Cross Road.
I'm not sure for attractions. The Eureka! science museum is great for taking children. The Piece Hall is architecturally unique and set to reopen in 2016, promising to offer boutiques and events. This is a great place to live, but it helps if you're a fan of walks and pubs. Clubbers rate Halifax for being notoriously cheap and lairy but I don't move in such circles.

Overall Score Out of 10?
Maybe I'm biased but the Shay is one of the best grounds around, at any level (and we've played in six of the buggers).
The new East Stand is a little generic but with a large executive porch that breaks up the monotony, and for the most part excellent views (though not without some very silly design faults). The South and North Stands are huge terraces at this day and age, holding 3,500–4,000 and rivalled only by Exeter City's. The Skircoat Stand was the first stand ever built here in 1921 and remains almost unchanged bar the seating. Embedded on banking and positioned slightly to the north of the pitch, it adds great character to the place.
I've been in a near-full Shay twice relatively recently, and can only hope one day it becomes a regular occurrence. 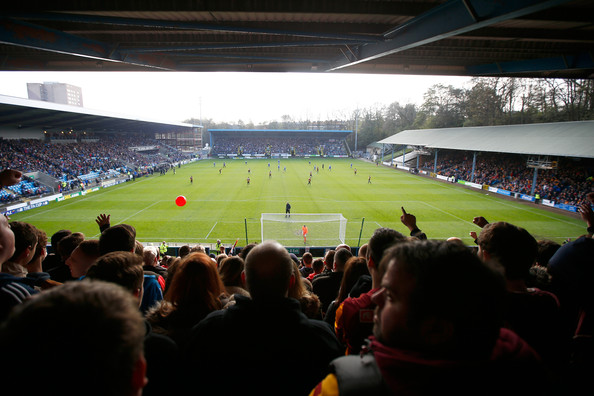 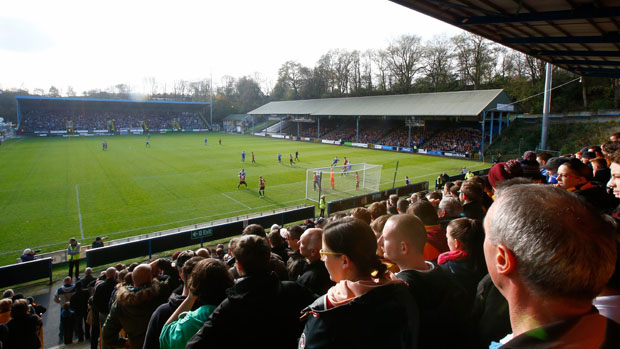 Has the roof behind the goal been added recently?

I seem to recall playing you in the cup a few years back on a rainy Sunday afternoon and there being no roof.

The terrace roofs were added pretty quickly after the terraces themselves due to league requirements.

If you're thinking Town vs. Charlton in November '11 then I think your mind's playing tricks: 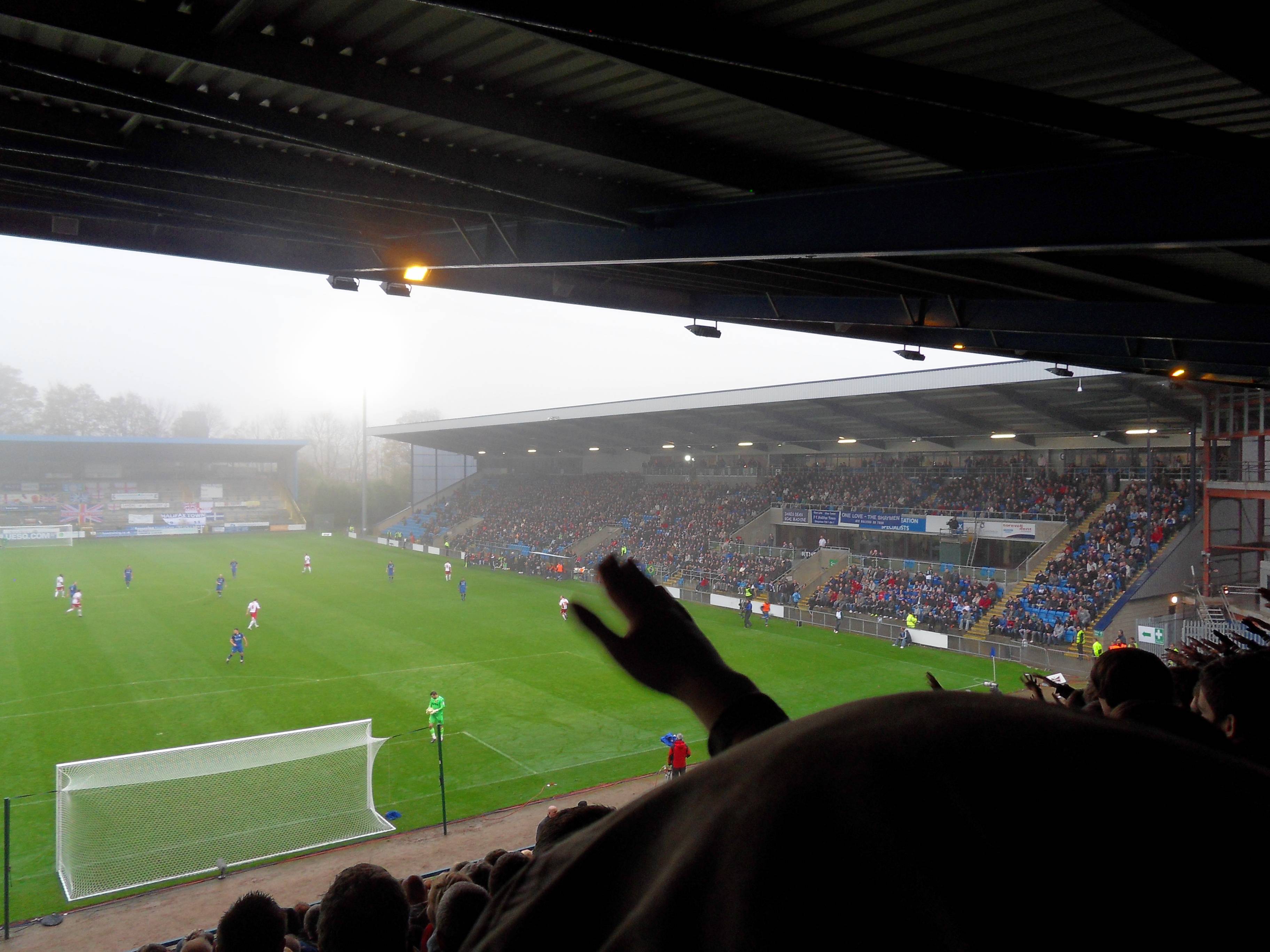