Close
Fancy a bet this weekend? Claim your £10 free bet from Betiton which can be used across all sports markets - Claim Now: Betiton.com
Close
Menu
Log in
Register
Navigation
More options
Contact us
Close Menu

dunno if I'm attracted to her or petrified of her.

RavenBish said:
dunno if I'm attracted to her or petrified of her.
Click to expand...

I think I am attracted, but only until she comes out of the curtain where her fight-face is on display...

I used to like Ronda, but now she just does my head in. She's not really good looking. Tremendous athlete though.
M

Well, we've managed a 5 post digression on whether she's DOABLE or not, so I guess we can put the "cool moment for wimmens sport" thing back on the back burner.

Jones has been stripped of the title and suspended indefinitely by the UFC.

Good to see the UFC taking a stand against someone who has shown the sport in a bad light. Jones has so many chances, but has messed up too many times. Finally the UFC putting finances aside to make a proper decision. Daniel Cormier v Rumble Johnson is going to be amazing.

Johnson vs Jones would have been better. The UFC needs Rumble Johnson to win this or they'll have another illegitimate belt holder on their hands until Jones returns. I think Cormier will beat him though, he should have more joy wrestling Johnson as he won't have to overcome a freakish reach disadvantage. The Cerrone vs Nurmagomedov fight is off the card too.

Nath said:
I used to like Ronda, but now she just does my head in. She's not really good looking. Tremendous athlete though.
Click to expand...

I'm the exact opposite. Used to be looking forward to seeing someone kick the crap out of her. At the start she was totally being shoved down our throats by the UFC and Dana White. However now, with every single dominant performance she's getting better and better and better. And now I'm a huge fan. I want to see her hold onto that belt for a long, long, long time.

Great card last night. Arlovski rolled back the years stopping Travis Browne in one of the most exciting fights I've seen. Literally was blow for blow. Weidmann showed his class dominating Vitor Belfort after a shaky start. Again, another superb fight which ended in a stoppage. Worthy champion. The main event was excellent too. Rumble came flying out throwing some heavy punches which sent Cormier down. Cormier regained composure quickly, then used his superior wrestling to drain the power from Rumble. After two rounds his cardio wasn't enough to sustain Cormier's weight. It finished with a rear-naked-choke. Cormier wants rematch with Jon Jones. Even if it happens Jon Jones would win again.

"UFC announced that Jose Aldo is out of UFC 189. It'll be McGregor vs MENDES for the interim title on July 11."

What a kick to the stones.

That was fucking unbelievable.

Nowhere for Aldo to run now. Going to be an incredible fight.

Unbelievable scenes. McGregor has backed everything up he's said. Proven doubters wrong, time and time again. He rid the inevitable wrestling storm, then came back with his superb boxing skill. He's taken Irish MMA to another level and the UFC to unprecedented heights. McGregor v Aldo will be colossal. If it's in Ireland there is no doubt whatsoever I'll be there.

I had a feeling Holly would win, and it was all but confirmed the moment she fucked with Ronda's head during the face-off when she pushed Ronda down with her fists. Ronda was completely head fucked.

Thata what happens when you try to slug it out with a boxer. If she'd taken it to the ground it'd have been a other story.

Just watched the whole fight. Ronda didn't just get caught, she got schooled for the entire fight. Holly was even able to take her down. 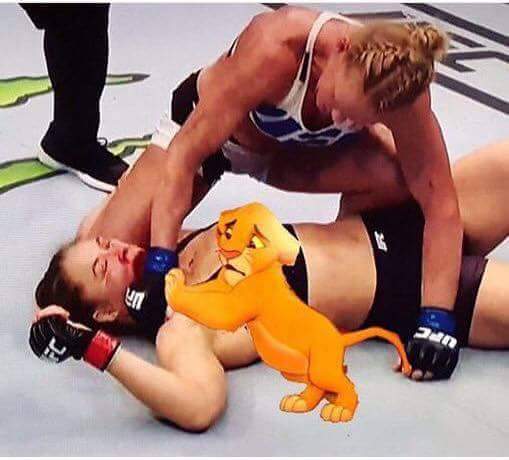 Ronda getting sparked out is the best thing to happen for the Women's division. It wasn't just a case of getting caught by a shot, as she was completely dominated. Dana's cash cow may just start to dry up.
M

My Irish background has dictated my interest in the sport to now though through following the "Conor freight train" (DANA), it's become clear that Aldo is widely considered as THE man.

Is McGregor capable of doing the business or have I fallen for the Ricky Hatton-like hype/belief that HBO twice sold me in the past?
A

Like yourself I'm a complete casual with UFC so can't pass an opinion of any substance. What I will say though is Conor McGregor is a fascinating character and a muvha fucking G.

Can't look past an Aldo win, he's for me the elite of the elite. McGregor has great stand up but so does Aldo and I'd say Aldo eclipses the rest of what McGregor has. All I know is that someone is getting hurt, I'm ready for a war.

Gilly? said:
Can't look past an Aldo win, he's for me the elite of the elite. McGregor has great stand up but so does Aldo and I'd say Aldo eclipses the rest of what McGregor has. All I know is that someone is getting hurt, I'm ready for a war.
Click to expand...

That was well worth staying up until 6am for. I've never been more speechless in my entire life #AndNew

McGregor had this fight won a long time ago. Mentally Aldo couldn't cope, which is surprising considering how long he was a champion. I think he knew himself McGregor was more than capable of beating him. There is no denying McGregor is the real deal. The doubters will have to accept that he's a fantastic fighter and a lot more than a cash cow for the UFC.

There's been a gradual rise, but Irish MMA is now about to blow up. Dana better give us Irish what we want. A McGregor fight at Croke Park.
M

Nath said:
McGregor had this fight won a long time ago. Mentally Aldo couldn't cope, which is surprising considering how long he was a champion.
Click to expand...

He won, and fair play (I did not think that he would), but this is an impressive amount of psychofanny to extrapolate from 13 seconds and one left hook.
You must log in or register to reply here.
Share:
Share