Noticed there wasn't already a thread made for this match, I've been around for a while (and can't be arsed to open a new account) but thought this is the prefect opportunity to create a rambling match thread!

This'll be my last home match until December and I approach it with almost as much enthusiasm as I managed for Crawley at home. I'm disappointed that we won't be seeing the Messi of the Southern League (Adam "Mazzer" Marriot) making speedster Mark Roberts look like a kaylied jinnyspinnert. I'm even more disappointed that we're apparently unlikely to see "6 of our best" players, including BBB Corr.


Perhaps if our Hertfordshire neighbours had a closer link with their Gloucestershire twin, Chavenage, it would add to the interest? Apparently ghosts are involved but the demon that is Westley played no part.

".......on the night of Nathaniel’s death a ghostly coach, with a headless driver, waited while the ghost of Nathaniel Stephens climbed on board. Once the Stephen’s soul was in the coach, the headless driver cracked the whip and drove off. Legend says the coach burst into flames as it crossed the boundaries of Chavenage’s grounds before fading from view."

Back to the game. Once more. I haven't a clue what team we'll put out, especially up front, but if the injury stories are not a smoke screen we could see Sam Beasant playing against his former club and Mark Roberts in a back 3 with Leon Legge and George Taft.

I can't believe that we'll get another 5,000+ crowd but there should be a half decent Hertfordshire away following as we're slightly more welcoming than their other near neighbours, in Bedfordshire.

Hot news off the press! Jez has got Richard to go hi tech and develop a patented Money Wheel of Excuses that has already been in use developing his pre-match comments this week - 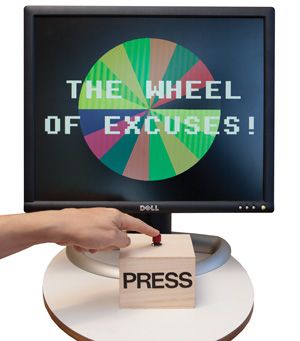 The Doctor's latest odds on post match "observations" to Mark Johnson include:

I'm considering a small punt on "Players too pumped up and fans too lethargic at the prospect of playing yet another England international's team."
S

Very important win for us and probably a deserved one.
Talk about leaving it until the last minute though.
N

4,852 (including a surprisingly high home contingent) was announced. That was fun (eventually) for those of us who suffered the ponderous first 80 minutes. Thankfully, Richard recognised the issue of a clean sheet being not enough at home - and the mythical Gaffney delivered his celtic cross.

Stevenage are the worst side I've seen so far this season. Sheringham will be gone by xmas.

SVH said:
Stevenage are the worst side I've seen so far this season. Sheringham will be gone by xmas.
Click to expand...

I think they were probably the worst Stevenage side/performance I've seen ever. They've always had good goalies and our ex-keeper (for one day) was up to that standard and probably Boro MoM - but that still highlights how ponderous we looked whilst playing 5 at the back, including an injured right wing back and jack-of-all trades striker.

Wait, why does Barry Corr refer to himself in the third person.

Youpies said:
Wait, why does Barry Corr refer to himself in the third person.
Click to expand...

Mainly because @BarryCorr10 is not Barry Corr. I think that he might be a robot related to Brian.