Recently, I bought a game called "Where's My Helmet" on Steam for $3. Thought it was a good deal. A platformer game for only $3? Well some poor games aren't even worth any money at all, but is this one of them? Well I've only played 3 levels up to now, but I have gotten a good enough knowledge about the controls, the games mechanics, and comment on if its worth the $3. I obviously cannot judge the ending or the level design as there is still much more to come. You can call this "first impressions" instead of review if it makes you happy.

The first annoying thing you'll notice is the option menu. When you start a new game, you can set off the music and the full screen mode but when you get into the game, the full screen is back by itself while the music is also back. So what's the point of having an options menu at the start if it doesn't even matter in game? I didn't buy the game to stare at a title screen I bought it to play.

But anyways lets get into the gameplay.

First off, you get a bunch of tutorials at the start of the game. 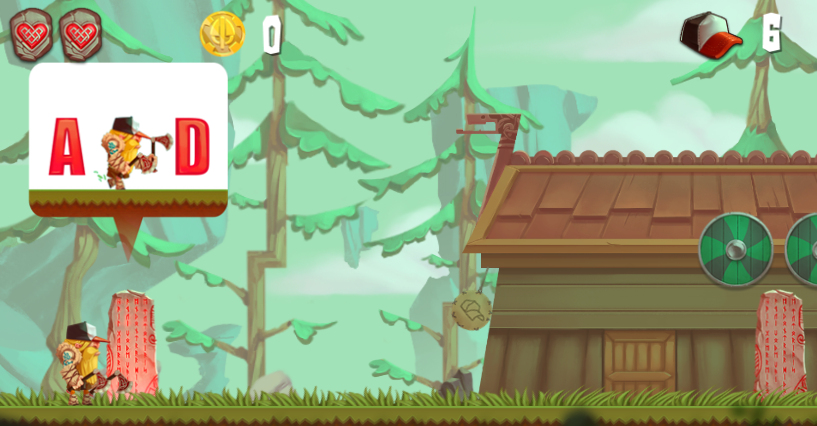 I don't know about the rest of you, but I usually try to learn about the game myself. I don't have patience for tutorials, but here its actually made really well. I don't mind tutorials in where you pass by a few speech bubbles telling you what to do. You can not only move with the A and D keys, but can also move with left and right. Although I much prefer A and D as it gives me good room between my 2 hands to feel comfortable with the controls. The tutorials are also really useful as it gives you a good idea of what to do in certain situations in the future. None of the games mechanics are too cryptic, but it can be somewhat difficult to figure out what to do on your own.

Next up the enemies,

The enemies aren't too difficult to take out. However there is one major problem. You can't move and use the axe you have, you can only attack standing in one place. This makes fighting enemies a lot more difficult than it should be. I've already had one part of my health taken out several times against the first enemy you find in the game (and I'm talking about the type of enemy, not literally the first enemy you run into). The first enemy is normally the easiest to take out? Well these guys are the most annoying enemy type I've run into so far. They move at a decent speed meaning they surprise you and have to stop quickly to take them out. Remember you can only attack in one place, which is annoying. When they come in pairs, its the worst. Its really easy to lose health to this enemy type. Why am I not talking about the others? Well the others are tolerable, but the first enemy you run into (the one in the picture below) are the worst. 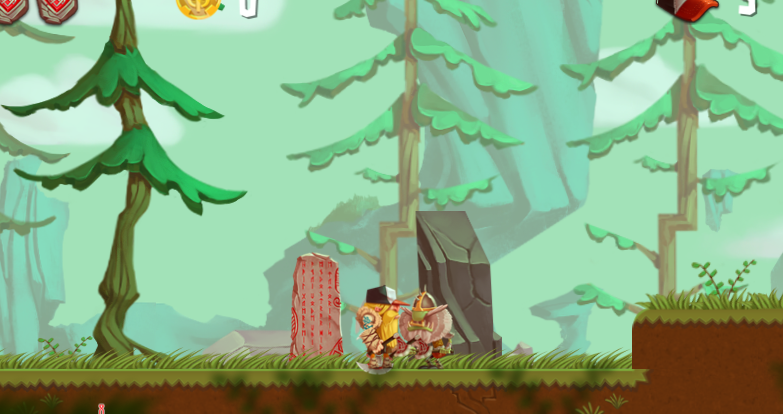 Another one of the games mechanics is to shoot the axe to the wall to help you climb up. Its a good idea, but poorly executed. 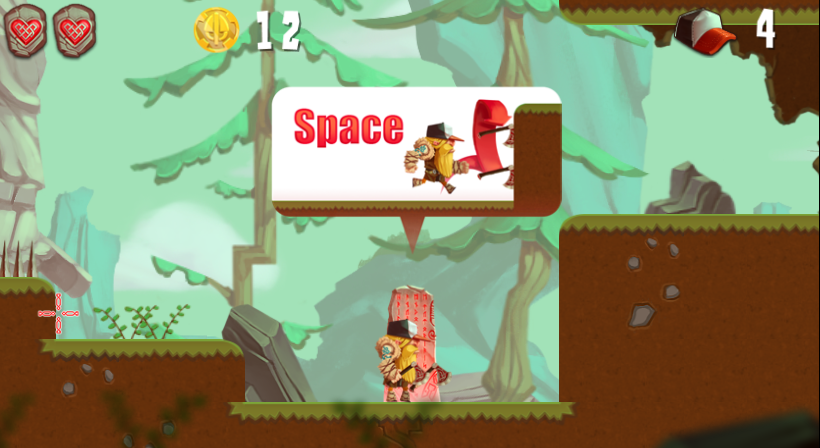 The first problem is the axe disappears too quickly.

It doesn't sound to be a problem, but when the jumping is poor, it can be a huge problem. They overdid it with the axe climbing. In later levels in the first world, there is climbing above gaps, meaning you have to be quick. All of the problems has to do with the axe disappearing too quickly. Sometimes when you attempt to jump on the axe, you go right through it which can be very frustrating. Luckily this happens less often, but it can be extremely annoying have to throw an axe at a wall above a gap, jumping on the axe and then falling right through it which takes away one of your lives. The next issue is you have to keep climbing up bigger walls. Like I said the axe disappears very quickly, and sometimes you need to right click several times for it to actually work consecutively. This is not only annoying in general, but its dangerous when you're climbing a wall above a gap. If you don't right click several times in a number of time, you'll end up falling and if you're above a gap you'll lose a life.

So I've listed all the cons, and now the pros. Unfortunately there isn't much to explain when it comes to the pros, because its a fun game with a few flaws. You can tell it was a game on a budget, and it was just recently released so I can't say its a bad game. Obviously I can't comment on everything as I've only played 3 levels, but its enjoyable and its very playable despite the flaws mentioned above.

So in conclusion, I'd say this game is well worth the $3. Again, you can tell this game had a limited budget, and for what it is, its a good game with decent graphics for a 2D game, and very enjoyable if you can get past those flaws. The flaws I mentioned should be fixed, but I wouldn't say it brings down the game entirely as I've managed to not struggle much with the above, but I've had a little bit of frustration trying to work the controls. Its a creative game with good ideas, and its very original. If they can fix the poorly executed mechanics that were good ideas, it would be a much better game and its very possible. First impressions, 6.5/10.

I need some feedback on this lads. My first review.

Also, can an admin move this over to "gaming zone"? Put this in the wrong section, must have been too tired last night

Something I just noticed, you have to start the whole game over again if you get a game over, so get as much collectibles as you can or else you're screwed.

I don't think anyone wants to review your helmet.

I'm gonna beat this fucker and then brag about it.