Northern Ireland might need somewhere else to play their home games for a bit after this. Cracks spotted in the Kop(West)Stand after the Finland game. 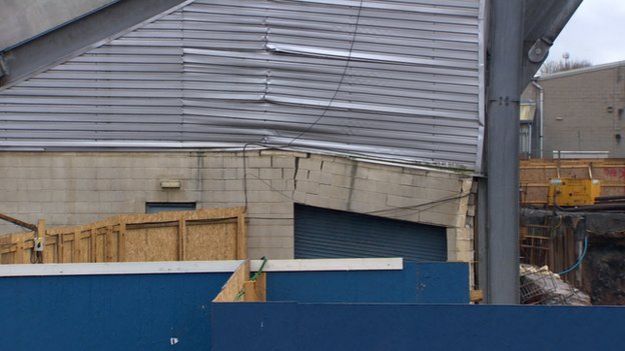 That's more than just a crack!

What on earth caused it?
They need to get started with that redevelopment of Windsor Park sharpish!
Is there anywhere else in Northern Ireland that is suitably qualified to host competitive international matches? I'm sure Northern Ireland don't want to end up in the situation they were forced to be in the 1970s when, due to the Troubles, they ended up playing home matches in places such as Coventry.

rudebwoyben said:
What on earth caused it?
Click to expand...

Fatties. Or as we now call them, the horizontally challenged.

Linfield used to have a large manager who jumped up and down on the odd occasion.

1980 said:
Northern Ireland might need somewhere else to play their home games for a bit after this. Cracks spotted in the Kop(West)Stand after the Finland game.

Look's like Roy Carroll has slightly improved his kicking accuracy.

Linfield are playing their next home game at Ballymena. No decision yet on where NI's remaining qualifiers, or the Irish Cup Final will be.

Croke Park, let's do it, build those bridges...