Not sure on Derby. Not really seen Huddersfield mentioned an awful lot this season.

Hartlepool are an interesting one. In half decent form for a side battling relegation and 18/5 at Luton who have lost 8 of their last 10.

In the Conference, I quite like the look of FGR (evens) at Gateshead. As I said last week, Gateshead's season has fizzled out while FGR battle for a PO place. They're in good form, too.

Another one is Dover (11/4) at home to Bristol Rovers, albeit a risky one. Dover are in decent form (7 wins in 10 I think) so it's not as if they're hosting a team going for automatic promotion and are terrible themselves. They're good on their own patch (4th best), and they have a better record at home than Bristol Rovers have away. The price they're at probably merits a bit of a risk on that one.

Possibly Halifax (evens) at home to Torquay as well, not sure. 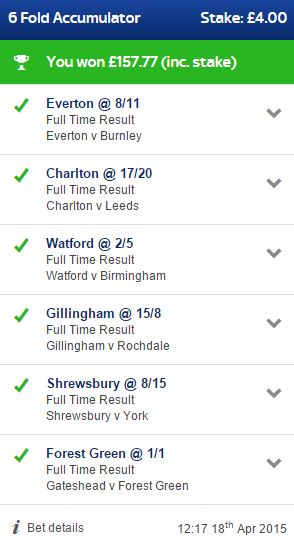 The 3 teams to be relegated from the premier league

I can't see Hull or Sunderland winning another game

Had Bristol City to win the league, so that one came in at the weekend. Was a bit late jumping onto that one, though.

I've not said that for a while.

Just a heads up, Conference games KO at 5.15pm tomorrow so if you like all your games to come in at the same time on acca's then avoid!

Mixed some horses with the football.

Not holding out much hope, but Brentford, Derby, Wolves - 9/1.

Had £9 on Messi to score 1st tonight. Bottled out on having him 2 or more though

What way is everyone approaching the Bet365 inplay offer for tonights CL game? I'm thinking £40 on over 0.5 before game, then in play maybe £40 on both teams to score both halves.

Felt dirty betting on Rovers but a potential £187 could be worth it considering all 4 are in the finals.

it's times like that you wish you had more on!

Wouldn't those scores be after 90 mins? Southend won on penalties

Yeah its only 90 mins, which is why it's annoying,
G