Back by popular demand.

Tour Down Under starts tonight (live on Sky) and Tour of San Luis about to get under way too.

- These super showdowns never seem to work out (ie last year's Tour) but we could have a doozy this year, with Froome, Contador, Nibali and Quintana all focussing on July.

- Doping again. Cookson as UCI prez was the new broom. New cycling, new leadership, no more same old mistakes. Until Astana + feeder team had a pile of doping cases in quick succession and it was decided that it would be impossible to take away their World Tour licence or owt. Plus ca change...

- The Hour is back in vogue. Voigt and then Brandle and now some of the serious crono-men fancy a go. Rohan Dennis, Alex Dowsett (injury permitting) and The Baron of Kilburn all have attempts lined up.

- Brit-watch: We've been spoiled in recent years. 2014's cumulative palmares across the men's and women's sides still ranks really really high amongst British cycling's greatest ever seasons, but with the bar Cav, Froome & Wiggins had set it felt a bit after the Lord Mayor's show, especially with the TdF starting over here. Be interesting to see if the former 2 can bounce back, and who else might step up. Would not be surprised to see one of the Yates Bros bag summat quite big.

- Crappy name but hopefully a good race: ASO backed Tour de Yorkshire on the books for May. #Legacy

should be a good year. the TDF line up looks cracking this year with Froome, Quintana and Nibali all prioritising it and Contador wont be far away either. Tour de Yorkshire too although not anywhere close by me. But before all that the Spring Classics

Sky looked to have strengthened over the winter, haven't really been following it much though so need to get back into the swing of it.
M

Going past Newmillerdam, I'm there man.

I miss the Schlecks

Armstrong still showing no remorse then.

I don't get why they are even giving him the airtime to voice his opinions. He's irrelevant, just ignore the bell-end and let him rot.
M

I just noticed that this thread exists. Good.

Contador is gonna win the Giro by about 9 hours.

Looks like GB will leave the World Track Championships without a gold medal for the first time since 2001.

SUTSS said:
Looks like GB will leave the World Track Championships without a gold medal for the first time since 2001.
Click to expand...

A worry with the Olympics coming up?

I'm not sure. It's certainly not good but I think it was more a combination of injuries and bad luck than any serious problem. I think the days of GB dominating are over, the rest of the world has caught up but I'd still expect GB to be toward the top of the medal table.

Better news on the road with Thomas and Froome winning the Volta ao Algarve and Ruta del Sol respectively.
M

Back under way proper at the weekend.

Omloop on Saturday (streams only, unfortunately) and Kuurne-Bruxelles-Kuurne on Sunday (on Eurosport).

Hard to know quite what to expect cos the big boys will have an eye on peaking a month or so down the line, but proper fields on the start lines for both, and some of the heavy hitters like Boonen and Kristoff have already showed some form. The sideburned Bat-Signal must have gone up too, cos Lord Wiggins of Kilburn is gracing us with his presence, and would do well to show something if he's serious about having a tilt at Roubaix. Cavendish has a decent shot if the racing/weather isn't too selective on Sunday also.

Bloody love that photo. You find some real beauties.
M

Great to see the semi-classics getting some coverage in the UK media!

First proper race of the season and maybe the best finale we'll see all year:

Just seen the Tirreno-Adriatico is shaping up nicely.
Contador, Froome, Quintana, and Nibali and Cavendish, Sagan, Kittel, and Cancellara.
M

Nice win for Cav yesterday, his best for quite a while (not saying much after last year admittedly, but still). Bit of pressure on him to get it done after the farrago on Saturday too. Looking in good nick for Milan San Remo.
M

Strade Bianche on Saturday. Beautiful race and live on Eurosport. Newish but with an old school feel. Parcours sort of halfway between the cobbles and the Ardennes, which makes for an interesting mix of contenders. 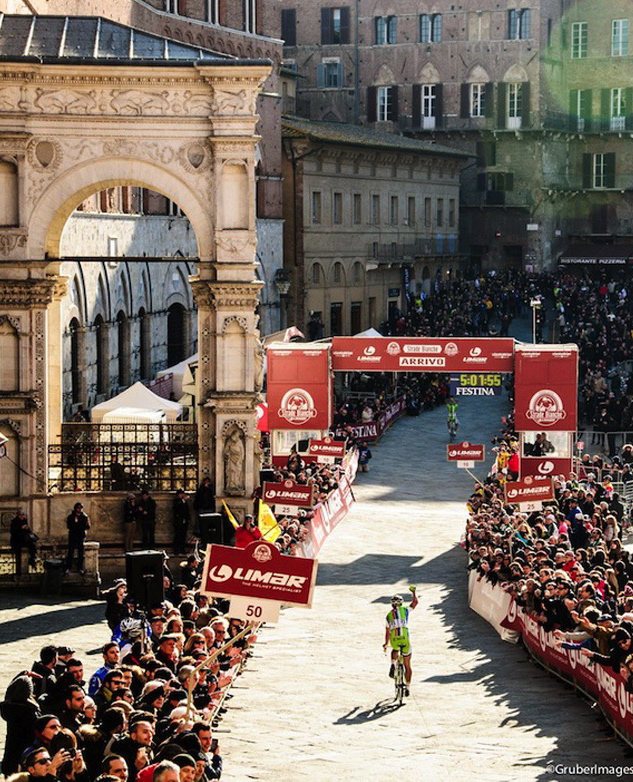 I'm watching the Tirreno but just seen that Richie Porte has won the Paris-nice and sky dominated.
M

Ruben Fernandez managed to fall of completely on his own whilst going uphill too. /fantasy moan

> I've got Viviani too. (And Boonen). I should just delete my team for the sake of the health of all concerned.
Last edited by a moderator: Mar 12, 2015

Richie Porte is one of my favourite cyclists. I'm gonna have to start getting into it again this season, so I actually know the form of some of em come the bigger tours!
M

Milan Sanremo on Sunday. Back to the old course, so no La Manie or Pompeiana, and finale back on via Roma. I wouldn't mind them sticking La Manie back in, but I do like it better this way. They seem intent on turning it into another one for the climby boys sooner or later though. Assholes.

Anyways, weather forecast to be grotty but not apocalyptically so, so good chances of a bunch sprint, and more or less all the fast chaps not named Kittel (or Viviani, less notably) will be on startline, mostly with teams built to serve them.

I think Kristoff again. Fast enough to win a bunch gallop, strong enough to make it into a more select group, double hard for anything stupidly long and in shitty weather, looks in good form. I'm not very far out on a limb there though.

Obviously not been watching cycling this year but Kristoff seems quite likely. How's Ben Swift looking? Any chance there?
M

Aint shown much. Couple of placings in Algarve and Paris Nice. It's hard to envisage how he could win. All the proper fast boys should whomp him if a big group comes to the line, and even if it's more selective Kristoff, Sagan, Degenkolb etc are just as durable + faster. Never know though, he's probs Sky's plan A, looking at their roster.