Well, this looks like it'll be a cracking final.

Would I be right in saying that neither team has been to the new Wembley yet? Well, discounting that 2008 game Wimbledon had against the Corinthian Casuals. First proper visit to Wembley then.

I'd imagine the crowd for this will be rather large. Plymouth are already working their way through their 35k allocation and I can't imagine Wimbledon will have too many issues shifting 20-25k.

Not bothered who goes up in the end. Plymouth would be my choice at Wimbledon is easier to get to, but the latter going up would make a nice story. Best of luck to both teams.

hoping Plymouth go up. Wimbledon is easier to get too and id expect Plymouth to be very strong again if they don't go up, Wimbledon not so.

be a good final to watch though and as JJ says a good crowd for league 2.

Very much looking forward to next weekend. I can fully understand the media attention that Wimbledon are getting with regards to there potential clash with MK and hopefully we can slip under the radar and come away with a result. Should be a very respectable crowd and hopefully both sides do there best to make a racket. 2 - 0 Plymouth

Do you Crewe fans realise how awful an away day Wimbledon is? Get em up!

Richard Cranium said:
Do you Crewe fans realise how awful an away day Wimbledon is? Get em up!
Click to expand...

Yes, went there 4 1/2 years ago. I know that terrace is cramped and has no view, especially if its full. But its much cheaper and way easier to get to. Besides, they'll be on the move soon. Plymouth will always be a pain in the arse to get to.

Oh yeah, we're doing this and I'm going nuts about it but haven't actually posted anything in the league 2 section yet.

I never really expected to get the chance to see Argyle get to Wembley. As to that question asked in the OP, yes it's our first time ever at the new one, and we only ever made it to the old one once as well so it's our second time in all of our history of getting to any kind of Wembley.

I never really got around to posting about that playoff second leg on here against Portsmouth, but it's probably gone down as my second best ever memory since supporting Argyle (beating QPR to win League 1 as champions and get promoted to the championship will probably always be my number 1, unless we do something crazy like win an FA cup or make the premier league in my life time... or actually, winning at Wembley may be in with a shout)... the whole feel of the game. Just a building pressure that kept growing and growing, I've never felt anything like it. And then the release when that goal went in. Man. I know I don't tend to talk about football much on here, but shit like that reminds you of why you love football so much in the first place.

So yes, I have my ticket. Can't fucking wait. Even if we lose, it'll be a hell of a day. Generally speaking, I don't do away days. And what I mean by that is, I once went and watched us lose to Bristol City away. And that's it. So fuck yeah. Bring it on.

Ok, I'll go back to talking about wrestling and video games now.

Steady ticket sales for us, apparently. Tomorrow is payday so I'll book my three tickets then.

Will we win? Maybe. Can we win? Absolutely.

Graham Carey signs a contract extension with us! Fantastic news ahead of the final.
C

Plymouth would be better for me, location wise, but the real Wombles have Bayo, Fuller and Barcham in their side

I can't see Bayo staying with us next season. Yes, he's been a game changer coming off the bench, but he'll want to start most matches.

RefWatch; Ref for Wombles v Plymouth is Iain Williamson, 45, from Thatcham in Berkshire. FL ref since 2002. Works as a sales director for Computershare in Bristol. In 35 games this season (11 Champ, 7 L1, 11 L2 & 6 Cup) he has given 132Y & 6R - high, and almost double the totals of the two refs we had for the Accy games. Opinions on him are mixed - some say he's terrible, others say he's dreadful - but he's definitely picky, fussy & thinks football isn't a contact sport. Great, sit this one out, Akinfenwa.

Looks like a fat farmer, and I can picture him quite at home on his knees in a field with both arms up a cows arse, a bit like the Platoon cover but with farm animals. That area of Berkshire is terrifyingly rural, I passed through it once & was convinced the streets there were named after people who could actually use a toilet properly. I mean, London streets are named after true British heroes who have won a few wars, ran the country for a bit without letting the Germans take over, or at least massacred some defenseless colonials. But, 'Kevin Street?' Seriously Berkshire? What the fuck did Kevin do? Go a full day without stabbing himself in the face with his fucking pitchfork? You're a national fucking hero, Kevin.

Reffed Wombles 4 times; 1-1 draw with Swindon in '11 (5Y); 1-1 draw with Morecambe in '12 (5Y); 2-0 away loss to Spireites in '13 (5Y) & 2-0 home win over Fleetwood in '13 (3Y). Reffed Plymouth (surely the Greece of L2 - often go bust, great for a weekend away, and full of dim-witted locals who smell of fish) 8 times (W3, D2, L3, average of 4Y in those games), most recently the 2-0 home win over Cambridge in Feb '15. Hates the scum. Reffed the 4-0 home thrashing by Millers in April. Top man. Hates the disenfranchised scum. I'd be disgusted if I were a franchise customer, and not because of the crook of a chairman, dreadful team, and abhorrence of a nation, but because of my dreadful body odour, single squinting eye, and tiny cock. God, it's great being a Womble, there's so much to hate.

Balls Of An Ox

Watching the cup final (as most of us are) and can't wait to be there to cheer on the Wombles in a week or so.

Trying to work out where my seat is!

Plymouth are a really good side, but so are we! It should be a cracking game and could really go either way...obviously I hope it goes the blue way!

Balls Of An Ox said:
Watching the cup final (as most of us are) and can't wait to be there to cheer on the Wombles in a week or so.

Trying to work out where my seat is!

Plymouth are a really good side, but so are we! It should be a cracking game and could really go either way...obviously I hope it goes the blue way!
Click to expand...

My seat's right behind the goal. I have a nasty feeling that the posts/nets might obscure my view. Ho hum, at least the Dons are there.

Meadow said:
My seat's right behind the goal. I have a nasty feeling that the posts/nets might obscure my view. Ho hum, at least the Dons are there.
Click to expand...

At least you will get good look when the Wombles score at your end. I'll have to do with an internet stream at 3AM in the morning here.

I'm going to this as a kind of football glory leech. I can't wait.

I was watching yesterday and can't wait for one side of Wembley to be Green. 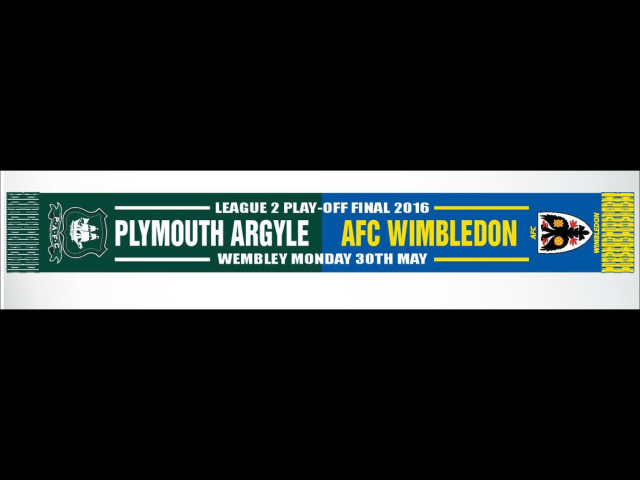 Worse than that, we've agreed to sell some. I'd have loved to have been a fly on the wall when that was brought up a shop meeting.

I don't think I can bring myself to watch this one.

Head wants Plymouth to win as theoretically they'll be a greater threat to our promotion challenge next season. Heart wants Wimbledon to win just so they can stick it to MK Dons in the league.

Good luck to both sides.

On the flip side of that. We gave improved every year and if we don't win we will challenge these top 7 spots again next year.

Improvement every year doesn't necessarily continue into every season. You may well threaten the top seven next season but Plymouth, in my eyes anyway, would be more likely to challenge for promotion.

Yes, Plymouth will always push for automatic promotion as long as they're in L2. Now, I don't know if the U's will have a top end playing budget next year, but if I knew now that we will be going for promotion, then I would want Plymouth to go up.

I don't get why you would want to wear the opposition colours, and after the match what do you do with it, other than bin it.

Wombling Kiwi said:
At least you will get good look when the Wombles score at your end. I'll have to do with an internet stream at 3AM in the morning here.
Click to expand...

If we can keep this squad mostly together no reason why we can't improve on it next season. Who knows. Hopefully we won't have to worry about league two though!

Wombling Kiwi said:
I don't get why you would want to wear the opposition colours, and after the match what do you do with it, other than bin it.
Click to expand...

I see kids (mainly) down at KM wearing the half-scarves for the Liverpool game. That seems okay to me.
Some people want a memento of the day, although a scarf is weird, I suppose you can pin it to your bedroom wall or man cave when you get home...Is it the connection with mainly tourists or neutrals buying them or is it more deep-seated than that?

Wombling Kiwi said:
At least you will get good look when the Wombles score at your end. I'll have to do with an internet stream at 3AM in the morning here.
Click to expand...

PM me a link, got in touch with sky to ask if they were showing it...they are not
S

I was hoping someone else would be travelling from this part of the world....Ok NZ is a little further than Singapore but has to be worth it.....I am flying Friday night...Is there anyone else in this part of the world going ????
You must log in or register to reply here.
Share:
Facebook Twitter Reddit Pinterest Tumblr WhatsApp Email Share Link